It's amazing to me how Square continues to make high quality games with modern sensibilities that get snubbed simply for being such, yet when they commission low-effort, barely-playable-and-never-enjoyable faux-retro games that bring nothing new or interesting to the table year after year, they consistently get rewarded with praise and high sales.  Octopath Traveler is another example of that, mashing low-resolution 2D sprites and textures into a 3D engine with harsh directional lighting, heaps of bloom, stretched textures and a gross blurring filter on everything to create a horrifically overprocessed and ugly bastard child that is neither appealing for fans of retro RPGs nor pleasing to look at in the slightest.  Gameplay is no better, just being a drawn-out and tiresome experience where every fight takes far too long to finish and constant random encounters only further add to the tedium.  Fill the rest with shallow characters, cliched storylines, atrocious voice acting, dragging grind-heavy gameplay and dialog quality well below the level of the games its allegedly paying homage to, and you have a truly wretched experience.  Save your time and money for a few of the real standout JRPGs of the 16-bit era (Lunar, Chrono Trigger, Dragon Quest, Final Fantasy 5/6, Super Mario RPG, Phantasy Star, Shining Force, Breath of Fire, Soulblazer, Terranigma, Illusion of Gaia, Earthbound) instead.  Or if you want modern games that celebrate everything great about their predecessors while doing much to set themselves apart too, play Horizon's Gate, Undertale, Cadence of Hyrule, Dragon Quest XI S, Yakuza: Like a Dragon, Hades, One Step From Eden, Ikenfell, Divinity: Original Sin II or Trials of Mana 2020.  Either way, though, leave this one to be forgotten right alongside the other yearly dozens of lazy imitation retro games made by committee-run content mills like Acquire who say they love retro gaming, but mostly just love the easy sales they get by saying they do. 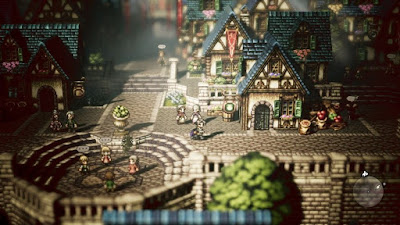