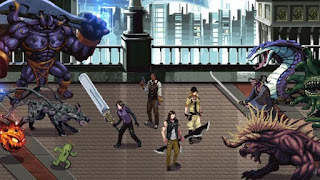 One of many Final Fantasy XV tie-ins to be released, this one was first made available as a preorder bonus and, after the game's launch, became a free download.  A King's Tale is a side-scrolling beat-em-up with a few Final Fantasy twists - some enemies resist certain types of magic, you can do different combinations of moves to stun and juggle enemies (necessary for many of your larger foes), and all of the differing enemy types require different tactics to overcome.  However, you also get some help in the form of three summonable allies who can be called in after you land eight hits without taking damage, and upon landing 24 consecutive hits, one can summon the Armiger to deal heavy damage to a single foe, as well as calling in your previously-summoned allies to do their own attacks and deal massive damage.  The main campaign is short - it should only take you about two hours to complete - but a number of trophies and optional challenges will keep you coming back.  If you enjoy arcade style beat-em-ups, give this one a try - it's a lot of fun and, as mentioned, is free. 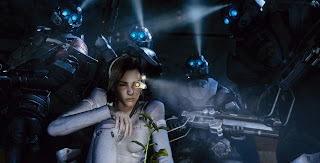 A Final Fantasy movie wasn't a completely ridiculous thing for Square to attempt; after all, Final Fantasies 7 through 9 on the Playstation were acclaimed for their high-quality CGI cutscenes and action-movie-like presentations, so why not take the extra step and create a full-blown feature film?  Well, the idea was sound on paper, but the actual execution was... lackluster, to say the least.  While the CGI animation was undoubtedly quite impressive for the time, it's a bit hard to go back to today, with a lot of obvious static "matte paintings" for backdrops and character models frequently slipping into the uncanny valley.  They got quite a few well-known actors for prominent roles in the film (Ming-Na Wen, Alec Baldwin, James Woods, Donald Sutherland and Ving Rhames among them), but they're never given any real development as characters, and the lack of any skilled direction just makes most of their voiced performances feel wooden.  The plot is lackluster as well, just feeling like a cookie-cutter RPG plot compressed into a 106-minute film, and they don't make any attempt to trim events to fit into the time allotted.  As a result, the film mostly skips the first two acts and leaps right into the climax, when our protagonists have already collected five of the eight plot macguffins and the one-dimensional close-minded antagonist character is about to make his power-move and potentially doom humanity with his hubris; all stuff you'd see in the typical Final Fantasy games of the era without any new twist for the medium of film.  Really, it's just a not-so-great RPG script adapted into a feature-length cutscene, which just reinforces my perception of Hironobu Sakaguchi as a one-trick pony.  The guy can make a decent (if formulaic) fantasy RPG plot outline, but keep him away from anything regarding characterization, action staging or voice direction, please; it barely works in most of his games and falls apart completely when you move it onto the silver screen, where every moment counts in building an effective story.

Also of note: The film's heroine, Aki Ross, was slated to be the first computer-generated actress and appear in numerous future film roles, but owing to Spirits Within's financial failure and the subsequent closure of Square Films, that never quite happened. 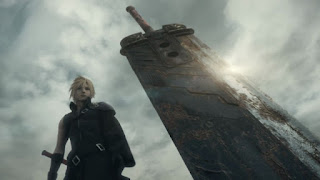 Final Fantasy VII continued to be a highly beloved name for Square (and Square Enix) for long after its release, and no secret was made of the fact that they knew that.  Not content to loan Final Fantasy VII out to cameos in other games, action figures, a handful of video game sequels that ranged from decent (Crisis Core) to absolutely terrible (Dirge of Cerberus) and an anime series, they then announced a CG movie as a direct sequel to the events of the game.  When we actually got to watch it, though, we quickly realized we were misled.  Despite being widely hailed as a big cast reunion and a game-changer for the story, it wasn't - nearly all of the main cast are reduced to glorified cameos, and they really had to bend over backwards to work some characters back in for their incredibly brief scenes (particularly Rufus).   The story is the stuff of fan fiction, showing a small number of Sephiroth's followers (only seen in the games as weak, lethargic robed figures) who unexpectedly have superpowers that let them ricochet around the landscape like superballs and perform overly flashy feats of silliness; feats Cloud and Tifa are also effortlessly able to perform, with the former wielding an exceptionally impractical seven-piece buster sword that disassembles and reforms on command.  Their goal, of course, is to resurrect FF7's main antagonist, which they do... for another glorified, barely-five-minute cameo before Cloud dispatches him once again with a flashy limit break attack, leaving the audience to wonder what the point of any of this was besides putting some more money in Square Enix's coffers.  It is at least a more watchable film than Spirits Within, with much tighter pacing, a more concise (if ridiculous) story and the OTT action scenes proving quite spectacular (with several moments directly mirrored in other Nomura-directed projects like Kingdom Hearts II), but it all just smacks of yet another unnecessary attempt to bankroll a popular name; hence my derisive nickname for it of "Advent Cash-in." 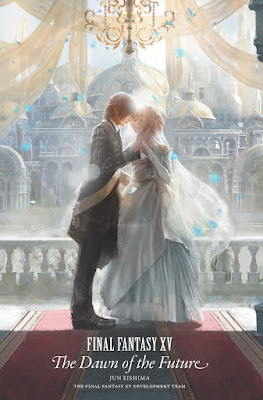 Final Fantasy XV was a very famously troubled production, spending over ten years being tweaked, recut and re-edited before finally being released in a still-incomplete state in 2016.  They attempted to give fans their money's worth with a series of followup patches (both free and paid) to fix bugs, reintroduce some cut content and give the other characters more time in the spotlight with episodic, character-focused stories lasting a few hours apiece.  This did prove successful at first, with three stories focused on Gladiolus, Ignis and Prompto being released both as digital downloads and packaged in with the Royal Edition of the game.  A second season was commissioned as well; however, the game's director, Hajime Tabata, unexpectedly resigned from the company shortly after Episode Ardyn was released and the remaining episodes were subsequently canceled.  Dawn of the Future is essentially the story of those remaining episodes released in book form, telling the tales of Ardyn, Solara Antiquum and Lunafreya, as well as a concluding chapter (and alternate ending to the story) where all of the game's key players stand together against a common foe.  I wasn't super thrilled to see it all come back to the longtime Final Fantasy cliché of man-versus-sanctimonious-god when the base game did a fantastic job of avoiding that (not to mention it feels completely out of left field here, with characters suddenly doing 180-degree personality turns that aren't built up whatsoever and are hugely distracting), but it is at least nice to see some more of the many alternate ideas for the long-winded tale of FFXV, as well as some previously unseen concept art for what could have been had the unfinished DLC episodes been fully realized.  So, once again, if you're a Final Fantasy XV fan this one will probably be something you'll enjoy, but if not you can safely ignore it. 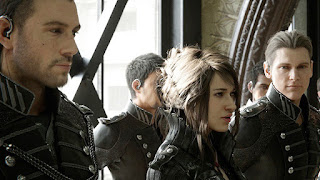 As with its game counterpart, Kingsglaive mostly seems to exist to show that it could do well what its predecessors failed at - showing off a lot of CGI spectacle while still telling a good story with some strong, well-written characters.  I think it actually does an admirable job, too - while you obviously won't have the same appreciation for it if you didn't enjoy the game, I found it to be a fun movie, depicting the details of one of the game's most prominent events - the fall of Insomnia - and giving you a greater appreciation for events and characters you don't really see a lot of first-hand in Final Fantasy XV.  We also get a pretty cool, if short-lived, protagonist in Nyx Ulric, who proves to be a badass and selfless hero facing off with not just the invading Niflheim army, but a number of traitors within his own ranks.  Like Advent Children, it's mostly a showpiece for over-the-top action scenes, but here they actually fit in well with the base game's overall style instead of just feeling overdone to the point of becoming farcical.  It's a glorified trailer/prequel for a sharply divisive game, but if you enjoyed Final Fantasy XV as much as I did, Kingsglaive is well worth a watch. 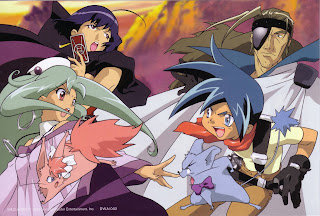 An anime loosely based on the Wild Arms video game series, though there's not really a direct connection to any single game other than a few common themes.  Its story focuses on the the archetype of the wandering hero, having the protagonist (Sheyenne Rainstorm) and his sidekick (Dr. Kiel Aronnax) seeking out his lost real body while wielding the titular ARM (this time a big doom-gun in the shape of a revolver).  Their adventures lead them to constantly clash with the Crimson Noble Mirabelle and her underling Loretta, though they often join forces in the end to overcome some villain-of-the-week that gets unleashed; usually a nondescript giant monster.  Honestly, the whole thing just feels like a discount Trigun almost every step of the way.  If you're a big fan of the Wild Arms franchise you might enjoy it, otherwise you can probably safely give this one a pass.  If nothing else, however, you should check out the show's soundtrack - composed by Kow Otani (known for composing the soundtracks to a number of high profile anime series and the Playstation 2 classic Shadow of the Colossus), it definitely has his trademark epic feel and is well worth a listen.
Home
Subscribe to: Posts (Atom)