Mortal Kombat of course needs no introduction; a popular '90s fighting game franchise that combined martial arts, monsters and magic, it quickly became a fan favorite for its unique comic book flair and for having tons of hidden secrets for players to unlock.  It also drew plenty of controversy for its over-the-top violent finishing moves and mid-match bloodletting, and was almost singlehandedly responsible for the creation of the Entertainment Software Rating Board and their content rating system that appears on every video game released to this day.  Mortal Kombat Mythologies: Sub-Zero was presumably intended to be the first of a sub-franchise that would have expanded the series' lore and storytelling, though its poor critical reception (as well as the dismal failure of another spinoff game, Mortal Kombat Special Forces) quickly put a damper on those plans.  It isn't difficult to see why the game flopped after only a few minutes of playing it, either; essentially, they attempted to take a fighting game engine and incorporate platforming, puzzle solving and RPG-style levels and boss fights into it, and the end result was - to put it charitably - disastrous.  Enemies all have the same strange AI as the 2D Mortal Kombat games, which is to say they're either braindead easy or read every input from your controller and instantly counter it until you're dead.  Every level is laden with platforming puzzles and traps that either eat a huge chunk of your health or (much more frequently) just kill you instantly, and avoiding them is a pain owing to the fact that the screen doesn't scroll until you're roughly 2/3 of the way from the edge.  Each level is also a convoluted maze where enemies can attack at virtually any time, and you have to hit a button to turn Sub-Zero around to face them every time they come from behind or jump over you (and lord help you if enemies attack from both sides at once).  The RPG element also feels lazily implemented - you get points for defeating enemies and unleashing combos, and reaching certain thresholds unlocks more special moves, including Sub-Zero's freeze blast; that's right, you don't even start the game with the character's signature move.  Boss fights are downright nightmarish too, often requiring extremely niche tactics to even hit them, let alone whittle down their enormous life bars, and they can generally kill you in only a few hits (which you often cannot block).  You do get items that restore health, boost your attack/defense or grant temporary invincibility, but these are so few and far between and the combat is so frequent that they barely provide any help, and if you die and have to restart a boss battle after using some, they don't come back.  Just an amazingly frustrating and poorly-planned experience on every front.  Hell, when there's secret codes to give yourself 999 lives and unlimited health powerups and even that barely makes it more tolerable, you know your game is in serious trouble.  The only highlight of the whole mess are the live action cutscenes, which showcase some truly cheesy acting and special effects, and it's almost worth suffering through the aggravation just to watch them.  Almost.

If you want to try a good MK spinoff game, play Mortal Kombat: Shaolin Monks instead.  It's similar in concept to this game - platforming mixed with a scrolling beat-em-up and some light RPG elements - but in an engine actually built for that style of gameplay, and while relatively monotonous it's quite a bit of fun, especially in two player co-op. 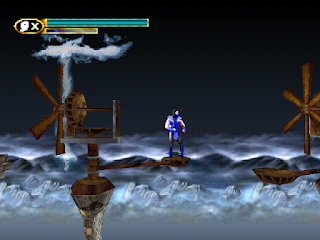 The third game in the X-COM franchise (and the only sequel to be helmed by series creator Julian Gollop), which tried to be something more grandiose in scale; ironically while only taking place in a single city rather than encompassing the entire planet. Not only do you have to contend with invading aliens, but the city's major players all come into play to work for or against you; for example, helping fund the police force will have them aid you in fending off alien invaders, befriending the android and alien-hybrid minorities can make new (and quite powerful) troops available, while making an enemy of the transportation corporations will make getting around to undertake missions much more difficult.  Unlike the previous X-COM games, the central government is also your only major funding lifeline; getting on bad terms with them (or seeing them fall to the aliens) can make the game downright miserable, forcing you to rob other factions to survive and painting a huge target on your back for the rest of the game.  There's also an alien worshipping cult that will oppose you no matter what you (or the aliens) do, which can be troublesome at times.  There's also an option for a real-time mode which sounds like it could speed up the monotonous search and destroy missions, but honestly, the AI is too mediocre and the action gets too chaotic to make it practical on all but the earliest battles.  Sadly the game wasn't as good as it could have been - internal conflicts and tight deadlines meant many planned features (like inter-faction conflicts and espionage missions) were scaled down or cut entirely, so the game overall feels very similar to the original with a few extra gimmicks glued on. Still a fun game that executes the X-COM hook of "gradually learn, adapt and overcome" quite well, but it's definitely not as well-refined and cohesive as the original classic. 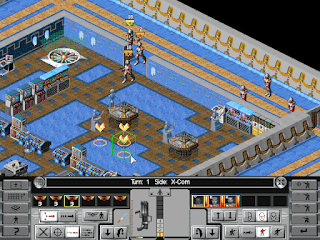 The Goonies is a popular adventure film from the '80s, following the tale of a group of kids in search of a lost treasure to save their homes.  It of course had a couple of video game adaptations, including one by Konami which oddly never had a cartridge release in North America (though it would be featured as a VS System arcade cabinet and on some Playchoice-10 demo units).  The film itself never had a sequel, but that didn't stop Konami from producing a game under the title "The Goonies II", with a similar premise to the original game - finding all of the lost Goonies.  However, rather than a short, stage-based arcade title, The Goonies II went more nonlinear, having a player explore a large map with a "front" and "back" side, connected by interwoven first-person maze segments.  The navigation is a bit confusing, though the locales are distinct enough to eventually let you piece together how everything connects together.  It's also a relatively easy game overall (dying rarely sets you back very far, you can track the location of each Goonie with a Magic Locator device, and there's a password system to save your progress), so it's one of the more forgiving early NES adventure titles. 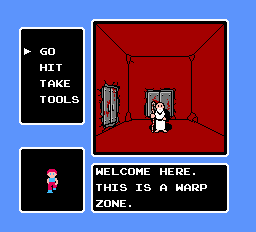