A tie-in to the movie released in 1991, it was also Sculptured Software's attempt to mash action and RPG elements together into a single experience.  But does Robin Hood: Prince of Thieves prove to be a valiant adaptation, or is this just another bad licensed game that was doomed to be forgotten? 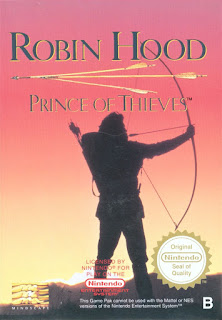 It's easy to dismiss movie-licensed games on their face; not only do they tend to be rushed to coincide with the film's release date to maximize profits, but they're often farmed out to low-end companies to boot, usually resulting in a lousy gaming experience overall.  Sculptured Software isn't exactly a company associated with quality, either - they were responsible for a lot of lousy shovelware games in the '80s and '90s, mostly licensed tie-ins and ports of forgettable sports games.

Robin Hood: Prince of Thieves one that's at least worth a closer look, though.  The game famously began its life under the title of  "the Legend of Robin Hood" that appeared to contain several hallmarks of computer RPGs - a large open world to explore, a dialog system not like that of Ultima, and even some minigames to add variety (like a first-person archery minigame).  As the film was being prepared for release, though, Acclaim purchased the license and it was quickly reworked to tie into the film, becoming a much more linear game and dropping a lot of the role-playing aspect.

Several RPG elements remain in the final build, though.  The game still utilizes an experience system, with Robin Hood and his allies gaining experience as you defeat enemies, which in turn will earn them levels once they gain enough, boosting their maximum HP, attack strength and carry weight.  Many enemies in the game are still decidedly fantastic and not connected to the film at all (with skeletons and fish-men being prominently featured in the opening demos).  Items can be picked up, dropped and equipped on a paper doll for each of your characters, not unlike Ultima 6, and there are bits of puzzle solving here and there - for example, you cannot enter Dubois Manor unless Robin is wearing the Locksley Amulet.  Surprisingly the game also has a minimap function, viewable via the menu, that keeps a handy navigation map of the area you're currently exploring - handy in some of the more maze-like dungeons.

There is a decent bit of variety to the game too; in fact, I drew a similarity to Suikoden in the fact that the game utilizes three different styles of combat throughout.  Much of the action takes place in a top-down perspective with real-time combat, not unlike Zelda.  However, for some story beats, the action switches to a one-on-one duel similar to a fighting game, having the player evade enemy blows and strike when an opening presents itself, with some surprisingly large sprites and fluid animation for the NES.  Finally, other story beats have the player and his comrades defeat incoming waves of foes from a bird's eye view, slightly similar to the old arcade game "Smash TV".  At a couple of points, the player must also flee enemies on horseback, turning the experience into a bit of a platformer where they must leap over obstacles in the road while staying ahead of their enemies; missing one of those results in an immediate game over, though, regardless of how much health one has left.

This all sounds cool on paper, and it is pretty nifty to see that level of variety in a game of the era.  However, the overall enjoyment factor is hampered by the fact that it all feels a bit undercooked.  Hit detection isn't terrible but feels slightly off in most areas, and most enemy attacks will very quickly drain your health (particularly archers, who fire arrows in very rapid succession and will shave your HP down to nothing given half a chance).  The inventory system and overall setup lead you to believe there will be a significant number of inventory puzzles and character maintenance, but that isn't really the case either.  Most puzzles just boil down to carrying and using a conspicuous key item at a particular place, gold and keys are scarcely ever used (the former almost always in the exact same area where you found them, usually a few feet away), and food and bandages are almost exactly the same in practice - both restore a character's HP.  Party maintenance is almost a non-factor too; your comrades don't help you at all save in the large-scale battles, and though they can die in these, death is not permanent for them - they will pop right back up the minute the battle ends and continue on with you as if nothing happened.  In fact, only Robin's death will bring the game to an end - an immediate Game Over, no less, with a limited number of continues available to finish the game.  There is no save feature, either, though there is a hidden password system that lets the player skip to particular moments of the story.  However, it is far from an ideal solution - you always start with the barest minimum of equipment, and if you use it to begin from the final castle, you will not have a key item you need to actually complete the game.

Visually, the game does at least look nice, with some detailed (if repetitious) environments to explore, identifiable enemy sprites and digitized likenesses of actors from the film for both dialog and cutscenes.  The music is also decent, if not amazing; few tracks stood out to me, but I didn't find myself reaching for the mute button, either.  Duels look quite good too, as mentioned, with large character sprites and some detailed backdrops for them to battle on.  Nothing really pushes the system to its limits, but all the same, there are definitely much worse-looking licensed games on the NES.

I think that also effectively describes the game as a whole.  I  wouldn't call it a hidden gem or even a particularly great game, but it's a competently made, relatively decent film tie-in and an interesting one from a developmental standpoint.  After playing a leaked prototype for "The Legend of Robin Hood", it's clear that Sculptured Software had lofty plans in mind, trying to create an ambitious open-world game not unlike the Ultima franchise (and ironically playing better than Origin's own port of Ultima 5 on the NES) with some action elements similar to Hillsfar, though better integrated into a cohesive experience.  Plans that ultimately never came to be as it was hastily repurposed into a linear licensed game with only the barest minimum of RPG elements surviving the journey, but we can at least wonder what would have been had they been left to their own devices. 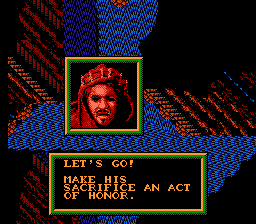 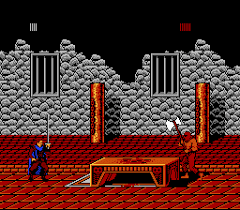