The third of the Dragon Warrior games and one that's held in regard as a classic by series fans.  But does Dragon Quest III still prove a worthwhile adventure today, or is this just another one for the history books and little else? 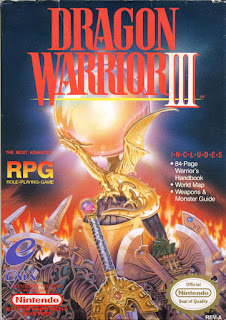 Dragon Quest was huge in Japan and still is today, continuing to get numerous spinoffs and sequels and having surprisingly few changes to its core gameplay despite leaps in technology.  It was not nearly as big in the west, though that didn't stop Enix from localizing three more games on the 8-bit systems alone, and while they may not have been hugely popular (particularly compared to the likes of Zelda), they nevertheless attracted a sizable following.

Dragon Quest III is regarded as one of the best RPGs on the NES platform by many, though, and it isn't hard to see why.  Taking the polished design of the previous two Dragon Quest games and incorporating some elements of the Final Fantasy series into the mix, it managed to introduce some replay value to its format on top of the lengthy adventure it already provided.  It even had a pretty clever twist at the end to tie it into its two predecessor games, though I won't give that away here.

The most significant addition to Dragon Quest III was that it contained a Final Fantasy styled class system.  While the main character themself has a fixed "hero" class, they could visit the guild hall and recruit up to three allies of any class they chose, letting them customize their party for the adventure ahead.  Several of these have direct equivalents to Final Fantasy classes - Soldier is basically equivalent to the Fighter, for example, wielding heavy weapons and armor but being unable to cast spells, while the Pilgrim casts healing spells, similar to the White Mage.  A few are unique, though, like the Merchant class; in addition to being decent fighters, they cause enemies to drop extra items and gold after a party victory, and in the remakes, even get some useful supportive skills like being able to call shops in the field and dig to find random items or money.  A class of dubious value in itself is the "Goof-off" or "Jester", which is a weak class that can randomly decide to take no actions during battle, making them unreliable and not particularly useful; however, they do have high Luck and are the only class that can upgrade to the powerful Sage class without requiring a special item, so keeping one around can be very beneficial in the long run.  Later ports of the game also add the Thief class, who again serves a powerful supportive role, letting the party steal items from enemies as well as temporarily disable encounters and find hidden treasures.

Later ports of the game also add much in the way of new content.  Not only are visual and music greatly overhauled, but much more is added to the gameplay, too.  More than 80 pieces of equipment are added, many of which are tied to finding hidden medals throughout the game world.  Bonus dungeons are added with many new monsters to battle and treasures to find, and the player can now search bookshelves, pots, barrels and the like to find hidden goodies.  Probably the most significant change, though, is that each character now has a "personality" based on a starting quiz which affects their stats, raising some and lowering others by a small percentage.  Some items and accessories found throughout the game can temporarily or permanently alter a character's personality as well, letting the player tweak the party to get more mileage out of their innate abilities.

The core gameplay of Dragon Quest remains essentially the same despite these changes, though - simplistic, turn-based action is the order of the day here.  It also thankfully is not nearly as grindy as its predecessors, though I still found myself hitting a brick wall boss at times and having to break away and level up for a few hours before I could beat them.  This got particularly frustrating toward the end, as I had to spend almost a full day of time farming Metal Slimes to get experience and levels so that I could stand a chance against the final boss.  This may have been addressed in some of the later ports as well (I mostly played the NES version), but I still found it to be a frustrating ordeal.

Despite that, though, I can't deny that this is probably the best of all the Dragon Quest games I've played.  It added some new twists on the format and lets the player customize their party to their liking, giving it an edge over most other RPGs of the era and some pretty good replayability.  The overall length of the journey, plus the amount of grinding and frequent encounter rate, make it one I wasn't overly keen on revisiting, though I imagine this situation is better in the remakes with some of the improvements made to them there.   Regardless, Dragon Quest III is a solid 80's RPG and worth a look for any serious genre fan. 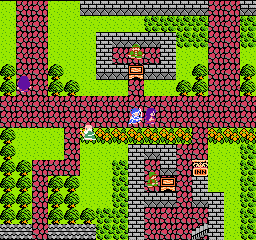 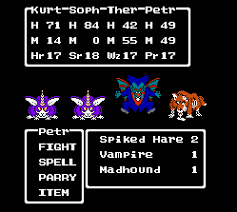 Developer: Chunsoft
Publisher: Enix
Platform: NES, Super Famicom, Game Boy Color, Mobile, Android, iOS, Switch
Released: 1988, 1992, 1996, 2000, 2009, 2014, 2017, 2019
Recommended Version:  The remakes all have a lot more to offer in terms of content and game balance, though there isn't really a clear consensus on which is the best as they all offer some exclusive content of their own.  The Super Famicom and Game Boy Color versions do seem to have the best value for your dollar though, in the form of a new minigame ("Pachisi") that can affect your characters' stats, animations for monsters and some extra music tracks.  However, the GBC version is the only one of the two that is (officially) available in English; this version also adds a new playable class (the Thief) and some exclusive side content in the form of the Medal Album and a new optional dungeon and boss.