A spinoff of the long-running Shin Megami Tensei franchise that combines elements of turn-based tactical and traditional RPGs.  But is this a successful fusion of gameplay elements, or does Devil Survivor fail to live up to scrutiny? 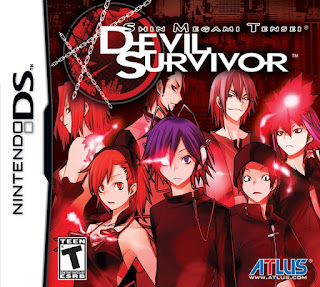 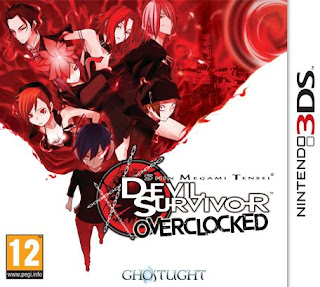 The first game in the series to be featured on the Nintendo DS, Devil Survivor was one that a lot of fans got excited for, myself included.  Having become a fan of the series with Nocturne and later Persona 3 and 4, it seemed like they were on a roll with this series and its relatively newfound popularity in the west.

When I played it, I certainly wasn't let down, either.  The game opens with its usual dark mood, punctuated with some kickass metal tunes and some foreboding scenes laying the groundwork for what is to come.  As per series norms, it's another grand plot involving demons being summoned into our world via a computer app, somewhat reminiscent of the early games on the Famicom and Super Famicom.  However, there are clearly some more modern elements worked in - the game takes place in modern-day Japan and definitely shows it, with the characters' cell phones and apps playing a prominent role in both the story and the gameplay.  Another plot point seems to draw inspiration from the anime/manga series "DeathNote"; namely a clock above every players' head, showing how many days they have left to live, with the players' choices and actions able to alter that number.

Devil Survivor's gameplay is an odd beast too.  While it appears to be a grid-based tactical RPG at a glance (and it is), there's quite a bit more going on underneath the hood.  The player controls up to four human characters as individual units, but each of them can command up to two demons to fight alongside them.  Approaching and attacking an enemy will put you into a single turn of a more traditional turn-based RPG combat system, with both sides picking their actions in advance and then carrying them out, then cutting back to the overhead grid view and tallying any experience earned from defeating foes afterward.  The center character in each formation (always a human for the party) is designated as the leader; defeating them will instantly remove the unit from the field, though you will get considerably less experience than if you defeat the two side-characters first.

A major strategic element comes in the form of the Extra Turn system. As in games like Nocturne and Persona, units (both friend and foe) can take part in a second turn after if they meet certain conditions - dodging an enemy attack, hitting their elemental weakness, or landing a critical hit with a physical attack, to name a few.  Only characters who earned a bonus turn on their first one can partake in this second round; the rest simply stand by while this plays out.  Ranged attacks are handled in the same way, though if one is attacking from out of the other party's reach, only they will actually get turns (and usually won't earn extra turns, even if they hit weaknesses or land criticals).

Other elements of the series have a new twist put on them, too.  The familiar element of recruiting demons returns, albeit in a different form - rather than negotiating with them in person, you go to a shopping app on your character's phone and purchase them off of an eBay-like website through timed auctions.  Bidding aggressively can cause other bidders to drop out, while closer races may come down to the wise, causing everyone still in the running to have to make one final bid once time expires, with the demon going to the highest bidder.  Some variation exists even between demons of the same type - others with a higher star ranking may have bonus stats or extra moves to utilizes, while weaker ones can be purchased for cheaper but have lower stats.

As in Nocturne, customizing your party is a huge part of the game's strategy - learning to minimize your party's potential weaknesses and having a good variety of your own skills to exploit enemy weaknesses and heal your own demons is essential to success.  Demons come pre-loaded with their own skills, though one can customize them to a degree via the series' usual fusion system - combining two or more demons together to create a new one with some abilities and stat bonuses from the old.  Human characters learn skills too, though in a different form - before combat starts, a character must mark a demon with a skill they want and then defeat them over the course of the battle; by doing so, they will "crack" that skill and permanently add it to the party's repertoire. However, only one person in the team can equip a particular skill, so some pre-planning is required to get the most out of them.  The game contains no items or equipment, either, so making the most of your skills - particularly HP and MP-restoring ones - is mandatory to complete the game.

Per series standards, Devil Survivor certainly pulls no punches with its difficulty, either.  Many battles have added objectives, like protecting civilians or preventing fleeing characters from escaping the field, and one critical in the wrong place can quickly put an end to your efforts there.  Missing essential skills, particularly in longer battles, can force you to reset and try again, losing a lot of progress.  But more than anything else, boss battles in the game are utterly hellish.  Even the first major boss, Beldr, is a nightmare, having a ranged attack that damages everyone on the field and heals himself and being completely immune to all damage, save for one Strength-driven attack that only the protagonist can use after a certain plot point.  You almost never get to fight him alone, either, as defeating all of his accompanying demons on the field will just cause more to be summoned, quickly overwhelming you unless you defeat him quickly.  It only gets worse from there, too, so being absolutely on-point, well-equipped and having powerful demons at your side every step of the way is essential to win.  One can back out and go to certain "free zones" to grind levels if needed, but this tends to become very tedious after a while as experience gains quickly plummet when fighting weaker foes, and as they likely won't offer you any new skills to crack it, only helps to a point anyway.

Devil Survivor, while not the first game to combine Shin Megami Tensei with the turn-based strategy genre, is probably its best effort, really emphasizing the elements of the series in the format well.  As usual, its choice-driven narrative with palpable effects (determining what characters will ultimately survive and which of several endings you will earn) give it plenty of replayability.  However, its punishing difficulty and often frustrating design make it one that may turn off a lot of less-experienced fans.  If you want a real challenge, pick it up, but if you want something to kick back and relax with, this definitely isn't the one for you. 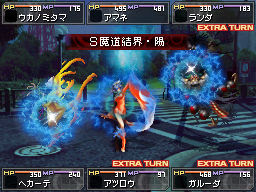 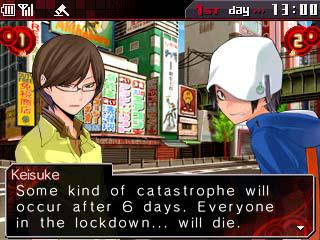 Developer: Career Soft
Publisher: Atlus
Platform: Nintendo DS, Nintendo 3DS
Released: 2009, 2011
Recommended version: The updated release for the 3DS (Overclocked) adds some player-friendly improvements such an easier difficulty setting and a compendium that allows the player to recover previously-used demons (at a cost).  More demons and skills are added too to further complement particular play styles, and the story is expanded, adding an 8th day to the proceedings as well as voice-over for all of the story scenes.