A long-anticipated, fiercely-demanded remake of a fan favorite that was teased and worked on for over a decade before its release, Final Fantasy VII Remake at last arrived in April of 2020.  But is this a treat for fans of the original classic, or just the Duke Nukem Forever of the RPG world? 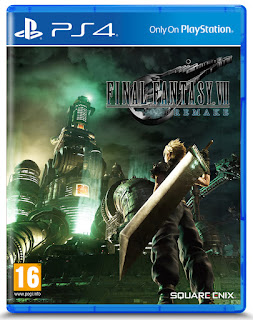 Final Fantasy VII continues to be a fan-favorite to this day, and rightfully so - it showed off what CD technology could really do for a game, offering a cinematic experience and storyline on par with a big-budget anime series, and was arguably the JRPG single-handedly most responsible for bringing the genre mainstream success and popularity.  People had long wanted to see more of the game's world, with Square having its characters cameo in numerous unrelated games, following up the original Final Fantasy VII with a number of spinoffs and adaptations (most of them bad) and teasing a remake of the opening video at the beginning of the Playstation 3's lifespan that never came to anything.  But, after years and years of being teased and delayed and teased again, they at last released a remake in 2020.

Part of one, at least.  Following in the footsteps of the Xenosaga trilogy for the Playstation 2, Square Enix made the controversial decision to split the storyline of the original Final Fantasy VII into three parts, each a full-length game in its own right.  On one hand, that's probably not what people expected or wanted, but on the other, this is probably the only RPG ever made with enough prestige and fan following to pull that off.  Unlike some other games that have attempted this format, though coughDOTHACK, I'm glad to say that they've made every effort to have it be worth the price, expanding the game's world and storyline to take full advantage of the episodic format.  If you're expecting a 1:1 retread of the original game, that's definitely not what you'll get here; not only is the gameplay and overall design completely reworked, but there are many new subplots, expanded story elements and game mechanics and a much denser world to explore.  It almost feels like a totally different game, and in most respects, it is.

The same level of care and attention that went into the original definitely returns here, too.  Thus far, it's the only Playstation 4 game I've encountered that requires more than one disc - one simply to install data and the other to actually play the game, taking up nearly 86 gigabytes of hard drive space in total once fully installed.  According to Square Enix, this is because there are no recycled assets in it whatsoever.  I believe them too, as no two areas or even elements within them look alike.  It also somehow manages to do wonders for what was already a game that wowed people with its visuals and sheer scale, as Midgar is nothing short of breathtaking when you see it from a character's eye level.  Recognizable locations are painstakingly recreated, but the size and scale of the setting truly dawns on you with the new perspective too, making you feel like you're really within an enormous self-contained city rife with corruption, decay and monsters.  Even a lot of the subtle little details, like the flaked-off paint on Cloud's weapon or equipped materia showing up on character models and even in cutscenes, tell a story in their own way, and show that the developers really did their best to make this game a captivating and immersive experience.  The game certainly doesn't lose anything visually when the action heats up, either; monsters actually show visible damage during battles (especially noticeable on bosses), and even when things get very chaotic, with huge amounts of particle effects, enemies leaping about and environmental elements getting destroyed around you, it never lags or slows down and rarely visibly loads textures.  Transitions between combat and wandering and even into cutscenes are nearly seamless, so it effectively avoids the stop-and-go feel of most older RPGs and keeps you consistently engaged.  Even the more over-the-top setpieces (some highly reminiscent of Advent Children) are a surprisingly good fit here, lending some comic relief to the game without feeling overdone or distracting.

Design-wise, the game definitely feels more akin to the style of Final Fantasy XV than the traditional JRPG fare of the original.  While not a fully open-world game like XV was, you are afforded frequent opportunities to wander about and explore locales, take in the staggering amount of detail they have on display, catch idle conversations between NPCs, and undertake a number of side-quests.  There are more than a few mundane kill-the-monster quests strewn throughout, though almost all of them at least take you to a new area or introduce you to a new type of monster, helping to keep them fresh regardless.  Most questlines also provide helpful rewards or at least an interesting story nugget, so they almost never feel fall into the trap of "content for the sake of content" that so many modern RPGs do and are all well worth doing.

In terms of overall gameplay, Final Fantasy VII Remake is a definite departure from the original.  In fact, it's more reminiscent of the style of Final Fantasy XV and Crisis Core than Final Fantasy VII's, taking place almost entirely in real-time while retaining an emphasis on RPG elements.  Essentially, you control one character at a time, with the rest being AI-controlled (though you can switch the active character with the directional pad whenever you wish in a fight).  Each character has a basic attack, block and dodge, as well as a unique action skill to complement their different playstyles.  Cloud, for example, can switch between Operator Mode and Punisher Mode, the former being relatively well balanced while Punisher moves much more slowly, but deals heavier damage and automatically counters whenever he successfully blocks an enemy attack.  Barret attacks with a rapid-fire ranged attack and can fire a powerful charged shot that slowly recharges over time (though in a pinch, you can also mash Triangle to recharge it more quickly).  Tifa isn't a particularly hard-hitting character, but moves and attacks vert quickly and can perform a skill called Unbridled Strength to bolster her damage and enable more powerful skills for use.  Learning to use all of these abilities effectively is definitely an essential step on the road to victory, as is utilizing the ability to stun enemies by persistently landing repeated blows to make them vulnerable (with many special moves filling the stun bar much quicker than standard attacks).

The game still utilizes the ATB Meter, albeit in a different form.  Managing it is a key element of the game's strategy too, as all of your skills, spells and even using items draw from it.  Each character's ATB bar slowly fills over time, though landing hits on enemies will fill it far more quickly, making it beneficial to stay on the offensive as much as possible (and, by extension, avoid damage with blocks and dodges while doing so).  Once a character has at least one full pip on the bar, you can press X to pause the action and select one of their skills, spells or items to use.  Skills, like abilities, differ from character to character; some come in the form of physical attacks that deal extra damage or stun, while others are more supportive.  For example, Barret can buff his own defense and make it harder for enemies to knock him down, while Aerith can drain her own ATB to fill her allies' meters.  Juggling between managing turns and actively attacking can be a bit much to manage if you're not used to action-RPGs of this type, though thankfully the game does include a mode that allows characters to attack and defend automatically, letting you simply focus on menu management while that plays out (not unlike the combat system in the Xenoblade games).  Enemies can stuff your spells and skills with a good hit and cause you to waste meter, though, which can certainly be frustrating.  Especially in larger battles, with a lot of enemies slinging spells and ranged attacks, the action can get very chaotic and make it difficult to squeeze a special in.  One surprisingly effective tactic I found, though, was to swap to another character right before using a crucial skill; enemies by preference will target the character the player is actively controlling, so doing that often caused them to back off and give them a chance to heal or perform a special move.

The materia system from the original returns too, and surprisingly remains its most familiar element, letting you customize characters with new skills, spells and some new abilities like "Deadly Dodge", letting the player perform an area-of-effect attack after successfully dodging.  These power up as you earn AP through battles, gaining more powerful effects as they go such as stronger spells or more range or damage for some attacks.  A new element comes in the weapon modification system;  essentially, each character now gets multiple weapons that serve as "side-grades" rather than straight upgrades from one another, emphasized by each giving different but relatively equal stat bonuses and special abilities whilst equipped.  As a character levels up, they will earn SP to spend on upgrading their weapons, generally in the form of added stat bonuses, extra materia slots, or bonuses to their stats that activate upon certain conditions (like getting more effect from spells while their HP level is above 75%).  Once all slots on a particular weapon are purchased, a "sub-core" is unlocked that allows more more skills and upgrades to be purchased, effectively rewarding the player for focusing their gameplay style in a particular direction rather than going for a jack-of-all trades approach.

So, was Final Fantasy VII's remake worth the long wait?  I certainly think it was, and that it will continue to be when the later chapters are eventually released.  It's a fresh new spin on a classic in every sense, taking the same basic story and premise and fleshing it out in a way that only modern technology could allow it to.  The eye for detail in its setting and the virtually seamless nature of its design really makes you feel like you've stepped into a new world, and it's easy to lose hours just taking in the scope and intricacy of it all between battles and story beats.  Combat and mechanics are familiar enough to be comfortable, yet fresh enough to keep the player engaged, and it proves to be a surprising challenge even for those who think they've mastered action-centered RPGs of this type.  It may not have the same cultural impact the original did (then again, few games could ever hope to), but it's a very worthwhile treat for fans of the original and newcomers alike.  I definitely can't wait for the rest of Final Fantasy VII Remake. 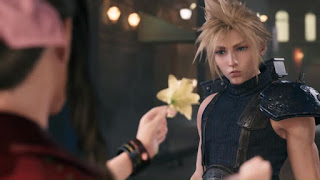 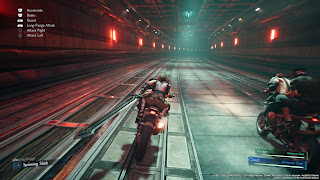