The fourth spinoff of the monstrously popular Final Fantasy VII, and it had a lot to atone for after the poorly-received Dirge of Cerberus on the Playstation 2.  But does this Playstation Portable outing prove to be worthy of the name, or is this just another bad outing for the world of Final Fantasy VII? 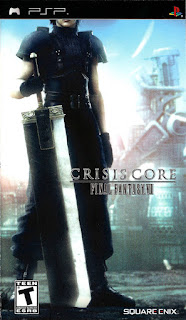 Final Fantasy VII was doubtlessly Square's breakout game, making them into a mainstream success and practically synonymous with Japanese RPGs in the west for many years.  So naturally, they sought to cash in on this popularity in any way they could.  Cloud and friends would cameo in numerous other games (Ehrgeiz, Final Fantasy Tactics, Kingdom Hearts, et cetera) and, several years after the fact, some sequels and spinoffs would begin to appear on various platforms.  The first was Before Crisis, a mobile phone game first released in 2004; this one has never been officially localized, though a complete fan remake was created in the RPG Maker 2003 engine.  Dirge of Cerberus followed two years after and was very negatively received by many fans, with gameplay essentially being a poor knockoff of Devil May Cry and the story feeling like a cheap cash-in sequel with little substance and an overuse of corny anime tropes.  Advent Children - a CGI movie - was released in 2006 as well, adding little to the story and overall feeling like little more than cheap fan service with a dash of Michael Bay-esque OTT action.

Thankfully, they seem to have finally gotten the message with Crisis Core, as the game both tries to be faithful to the tone of Final Fantasy VII's original entry, expands on its story in fitting fashion, and provide an action-driven style of gameplay that feels well-crafted and less derivative than Dirge of Cerberus.  Even some of its gameplay elements feel more faithful to the original, utilizing equippable Materia to allow for a variety of special moves and a constantly spinning slot reel mechanic (slightly reminiscent of Cait Sith's limit break) to keep combat dynamic.

In terms of plot, Crisis Core is a prequel story starring Zack Fair - a character who is mostly just alluded to in the original game, and only seen at length in one relatively obscure scene.  This is used to good effect throughout, though, giving the player a chance to see firsthand several events that are only hinted at throughout Final Fantasy VII (such as the war with Wutai) and get a bit more of a human perspective from characters like Sephiroth.  I was personally glad they went this route, as it afforded them a way to expand on the series' lore and give more attention to characters and events that are only alluded to in the first game, and showing more of a character that played a large role despite his minimal screen time.  Simultaneously, this allows it to avoid the same pitfall the sequels fell into - trying to re-engage the audience with cheap nostalgia and little else.

In keeping with the company's penchant for high production values, Crisis Core certainly doesn't skimp on its presentation.  The game is downright beautiful to look at, with clear, high-quality FMVs (despite the low resolution) carrying the story at points, and well-rendered spell effects, environments and combat animations throughout.  Character models are surprisingly expressive, and the monsters are large, imaginative and vicious-looking as per series norms.  The music and voiceover sound remarkably crisp and clear too, even as they come out of the PSP's tiny speakers.  It's easily one of the most impressive games on the platform from an aesthetic viewpoint, if not the best.

Gameplay-wise, Crisis Core is a relatively simple action experience.  The main storyline is broken up into a series of short missions - roughly 45 minutes to an hour apiece - which is in line with the portable format of the game.  Numerous optional missions can also be undertaken between story-relevant ones - usually toughened up battles from the story that offer rewards if they are successfully completed.  Combat takes place largely in real-time, with you selecting an action via the L and R triggers and then carrying it out via the X button - either a normal attack or one of six equippable materia that grant spells or special moves like a spinning slash, as well as an ever-present items menu for when you need a quick boost.  You also have a dodge button (mapped to Square) and a block button (mapped to Triangle) at all times.  However,  I rarely used the guard since you have to wait for an attack or dodge animation to completely finish before a block will activate, whereas you can cancel into a dodge at almost any point.  Between battles, you're afforded some opportunity to explore, interact with objects and change up your equipment if needed; you're afforded up to four accessory slots to do just that, and items are frequently earned as bonuses between missions or as hidden items during them.  Another very prominent mechanic is the bizarrely-named DMW ("Digital Mind Wave"), which is essentially spells, limit breaks, level-ups and a gambling element all rolled into one.  This affords you the opportunity you to adapt new tactics on the fly, perform your most powerful attacks and earn bonuses that either last a short while or for the duration of the combat phase.    It also requires that you dispatch foes with a degree of efficiency as it consumes 10 SP every time it spins, and will do so constantly as long as the player has SP to spend.


Essentially, it works like this: three slot reels spin, each with a number from 1 to 7 and a character portrait; at first there are only two visible (Sephiroth and Angeal), though more portraits are unlocked as you meet key characters during the story.  The player can earn beneficial status effects from getting at least one 7 in any reel or matching three of the same number - temporary invincibility, immunity to physical/magic attacks (either for a short period or the entire battle) or reducing MP or AP costs to 0 (ditto).  Getting two matching pictures on the left and right reels begins a "modulating phase", stopping the action temporarily and moving the reels to center-screen for another spin.  At this point, if all three reels have matching portraits, you get a bonus to your HP, MP, AP and SP and do one of several limit break animations (depending on the character they landed on).  The numbers spin during this phase too, which can potentially power up one of your equipped materia - rolling two of the same number from 1 to 6 will cause a materia in that slot to gain a level, while rolling three of the same will give it two levels instead.  If you roll three 7s during this phase, Zack himself will gain a level, permanently boosting his own stats.  A triple-7 is not completely random, however - Zack does have a hidden experience counter and must hit a certain threshold before the reels even have a chance to land on it.  As the game progresses more modifiers are added to the modulating phase, allowing you to perform summon attacks or earn bonuses like free items or casting a number of beneficial status effects all at once.  It certainly keeps the combat dynamic, but having no real control over what effects you'll get or when you get them may be a turnoff to some, especially during some of the tougher missions.

Soldier Points have another important effect in the game too; namely, tying into the Materia Fusion system.  This operates a bit like the magic crafting system from Final Fantasy 15, having the player combine two materia together to get a new one with the effects of both.  Fusing a Fire and a Dark materia together, for example, will create Dark Fire, which deals damage and inflicts Poison and Silence status at the same time.  Some materia also grant stat bonuses when equipped, like a bonus to Vitality, Attack or Luck, and these can be carried over to other materia that they are fused to, creating a cumulative effect if they have the same stat bonus.  Later in the game, one can even mix in items to get more stat bonuses, though only up to a certain point - trying to raise materia stat bonuses above a certain threshold (generally around 40) can only be done by fusing similar materia to them.

Crisis Core is definitely the standout title among the numerous Final Fantasy VII spinoffs.  While I wouldn't call it a masterpiece, one can definitely tell that the team behind it had passion for the series and wanted to do right by its fans.  (In fact, they famously wanted to include more interactions between Zack and Cloud, though they had to drop the majority of those planned scenes owing to the UMD format's relatively low storage space).  Its gameplay is relatively simple, yet fun, the story does justice to Final Fantasy VII and rarely feels superfluous, and the materia crafting system definitely provides some extra play value for the die-hard stat-grinders in the audience (though the random element to gaining levels certainly makes it more protracted than it needs to be).  For a portable spinoff game to a beloved classic, Crisis Core certainly didn't let me down. 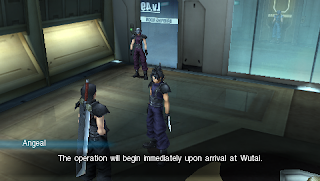 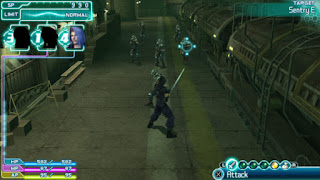 Developer: Square Enix
Publisher: Square Enix
Platform: Playstation Portable, PS4, PS5 PC, Switch, XBox One, XBox Series
Released: 2007, 2008, 2022
Recommended version: The HD ports on various platforms are definitely the ones to play nowadays, though you should try to get the PC, XBox Series or PS5 version if you can; I encountered quite a bit of lag and hitching on the PS4 release.  The PC version also has a fan mod available to restore the original voice acting from the PSP version if that's your preference.
Labels: ⭐⭐½, 2008, Full Reviews
Newer Post Older Post Home