The final part of the Final Fantasy XIII trilogy, and at first I had some hope for it, as it seemed to at last break away from the infamous railroaded gameplay of its predecessors and try something new.  Alas, I found myself severely disappointed yet again.  Lightning Returns at least has a clever concept, having the player operate on a thirteen-day time limit and complete missions to extend it, power up their character, and try to make their way to the final boss and defeat him before the sand in the hourglass finally runs out.  However, they've chosen to implement this idea in probably the most flat, unrewarding way possible - by making every single quest feel like busywork. Moreso as the bad writing of its predecessors is now a central focus of the gameplay too, having the player bond with NPCs and endure some of the most grating, over-worded, badly-acted dialog I've seen outside of a thirteen-year-old's whiny poetry, let alone in a multi-million dollar RPG project.  Combat is slightly changed up but no better than it was in the previous two games, mostly just coming down to swapping between three equipped costumes (functionally almost identical to the previous games' Paradigms) and spamming a small handful of attacks until everything is dead.  Yes, one does get the chance to block enemy attacks and stun enemies by striking at their weaknesses in order to reduce damage and get a better rank, but it's just not enough to make the action any more compelling; particularly when the game still can't craft a decent reason for you to care about slogging through any of the cynical by-the-numbers questlines, bad characterizations or droning action associated with either.  I may not be the biggest Final Fantasy fan, but the XIII trilogy will unquestionably stand in my mind as its biggest, most expensive failure.  By that already low standard, Lightning Returns stands out as the weakest of an already atrocious trilogy, one of the lowest points for any legendary franchise and one of the worst gaming experiences I've ever had.  Yes, it's really that bad. 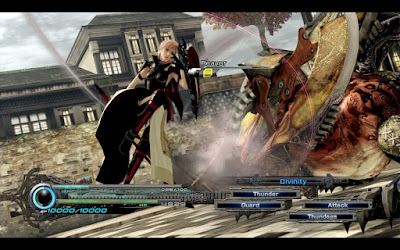