Yep, it's another attempt at a multiplayer Zelda, this time for the 3DS.  That effectively mitigates the boneheaded design flaw of the original (being a console game yet requiring handheld systems and link cables to play), but it has some screwups of its own; like only being able to play single player or three players, but having no option for two.  Aside from that, it's basically the same experience as Four Swords, being stage-based, linear and full of simplistic combat and puzzles - mostly based around stacking atop one another and tossing each other over gaps or up onto ledges.  There is an attempt in adding some replay value with a plethora of unlockable costumes for your Links, but it adds little to the longevity of the game unless you're a die-hard completionist.  It might be a bit of fun with two friends, but overall it's a short, lackluster and generally forgettable game that ranks among the series' worst.  There were plenty of better co-op games out there before the 2010's rolled around, so this one just felt dire by 2015. 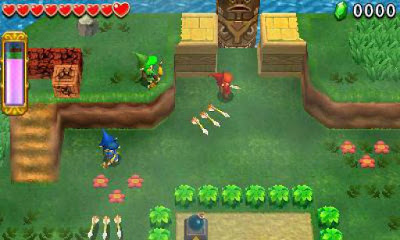