A sequel to Phantom Hourglass and utilizing the same engine and touch screen control setup.  The concept this time is an interesting one - Zelda accompanies you throughout the journey as a disembodied spirit, and can possess certain enemies to fight strong foes for you or solve certain puzzles, which I thought was a pretty cool gimmick and a nice flip on the played out damsel-in-distress scenario (as well as an odd parallel to the cartoon series from the 80s).  Sadly, the rest of the game fares much less well, with dragging pacing overall, some very irritating dungeons and an element I absolutely despised - the titular Spirit Tracks.  As in the previous game, you plot a route on the touch screen and then move down it, but along the way you have to switch tracks to avoid demonic train enemies that will kill you on contact (and hope you don't just go down another track that leads you right into the jaws of another one).  These appear between every dungeon and only get longer and more convoluted as you go, and making contact with one of the enemy trains results in an immediate death and forces you to start over.  I absolutely hated doing these segments, and got only about two dungeons in before I ended up facing another one and quickly decided I never wanted to play the game again.  Never, ever again. 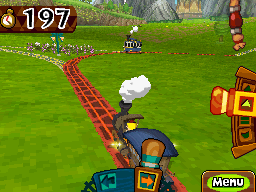