Right from the get-go, it seemed like Nintendo was kicking themselves for not including an analog stick on the Nintendo DS; Super Mario 64 DS was the first to suffer for it, and every game since then had to find some weird way to work around it.  Enter Phantom Hourglass, which awkwardly uses the touch screen for virtually everything - moving, attacking, switching items, plotting sailing routes and interacting with almost everything requires you to make gestures on the screen with the stylus.  Other DS features are used too, like using the microphone to stun Pols Voices (a nice callback to the first game) or having to close the screen to transfer a stamp from the top screen to a map on the bottom one.  Some of the puzzles are rather clever too - I always mention one where you stretch a rope between two pegs, then bounce an arrow off it to hit an eye switch behind you that closes when you face it.  They did an admirable job with what they had to work with, but all in all, Phantom Hourglass just ends up being an average, once-and-done game, which is pretty weak by the standards of the Zelda series.  I'd love to see another game set in the Wind Waker universe, but I hope it ends up being on hardware more suited to the task than this one was. 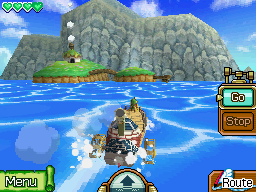