As the name implies, Final Fantasy XV: Pocket Edition is a scaled-down version of the original game.  This is most evident in that it is designed to be a much more linear experience - no longer an open-world game, but a series of short dungeons with the occasional reprieve at a town or rest stop to purchase items and talk with NPCs.  Fittingly, elements like the Ascension (skill tree) are scaled down to match this, and side-quests are considerably smaller in scope, typically just having you complete small optional goals along the way rather than travel a great distance across the game world to do so (with an objective pointer always present under your character).  Combat operates much like the original game, though the action gets paused to use items and you get a substantial amount of time to input QTEs for parries and counters, making things considerably less hectic.  Some new quests and dialog are added, however, and impressively, they even got all of the original voice cast to return for them.  Fortunately, while it was a game built for phones with touch screens, the controls work fine on a console with a controller (though one small annoyance with the Switch version is that you cannot use the D-pad to navigate menus - only the sticks).  Basically, the game delivers what its title promises - nothing more, nothing less.  So if you don't have one of the big consoles (or a beefy PC), or just want to experience the story of Final Fantasy XV again without nearly as much of a time investment, this one might be worth your while.  However, may want to wait for a sale or a price drop, as $30 is a rather steep investment for what you get. 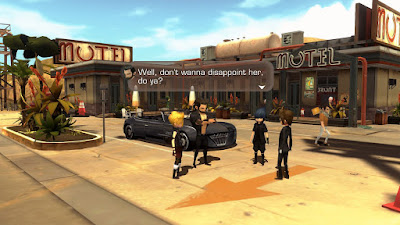