Fire Emblem: Shadow Dragon and the Blade of Light

The humble origin of the Fire Emblem franchise, which proved unpopular with critics for its difficulty curve and relatively undetailed graphics but was a big hit with Japanese gamers, who enjoyed its challenge and surprising depth; enough to make it a cult classic that would see fan translations, tons of sequels and spinoffs and, for a limited time, an official release on the Nintendo Switch marking its worldwide debut.  This game introduced the world to many of Fire Emblem's design tropes that would be used for three decades and counting - utilizing terrain and character skills to your advantage, having your equipment degrade with use (necessitating that you find/buy replacements on a fairly frequent basis), and of course the series' mainstay of dead units being lost forever, necessitating careful planning and risk mitigation.  That said, it is a bit slow and stiff to play, particularly compared to many of the newer games' highly polished UIs and memorable character interactions.  Still, it's worth a look for series fans and RPG buffs; if you want to experience the story in full, though, I'd say play the remake (Fire Emblem: Shadow Dragon for Nintendo DS) instead. 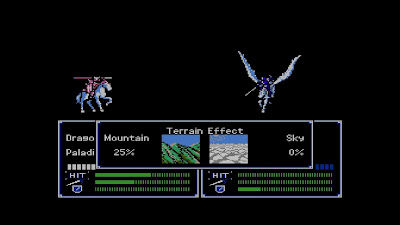