Folklore is a game that got some attention, especially for being one of the first RPGs on the Playstation 3 - a platform which was expected to deliver HD takes on several popular PS2 franchises and then... never really did.  Folklore is at least relatively unique in terms of setting and visual design, with a world and creatures largely inspired by Celtic folklore and a visual style and surreal narrative reminiscent of Tim Burton or American McGee's Alice - grotesque, yet charming.  The gameplay is a unique take on monster collecting - you summon "folks" to attack, either by summoning them to perform a move (as Ellen) or performing more direct attacks and combos (as Keats); weakening an enemy Folk enough will allow you to capture its Id and add that folk to your arsenal of possible attacks.  A puzzle element comes into play here, too - capturing some requires you to use folks of certain elements or inflict specific statuses.  Boss battles also play out more like puzzles, using folks in certain sequences to weaken and defeat them - for example, the first boss will suck up folks you summon, so you must summon Bargest to get stuck in its tentacles, then cut him free with Ogma, and then once both are severed, finish the job with Boobrie to attack the flowers on its back.  These are easily the best part of the game; the rest is relatively pedestrian hack-and-slash gameplay, and leveling up your folks becomes a tedious grind before long, requiring you to farm large amounts of randomly-spawning items or defeat assorted folks in large enough numbers.  The game isn't particularly long at only seven chapters, but even at such a short length it feels padded - you have to defeat all seven chapters with both characters, with few differences between them gameplay-wise or even story-wise; both characters experience the same plot from slightly different perspectives.  A pretty pedestrian early PS3 game in most respects and one not too many people bothered remembering once the platform's time in the limelight came to a close, but its trippy atmosphere and a few moments of ingenuity make it at least a bit more memorable than some others in its position (like good ol' Quest 64). 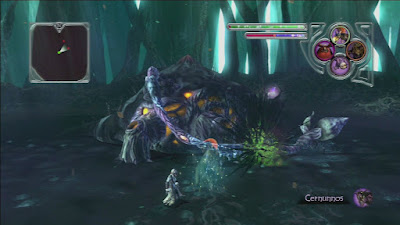