An obscure and long-lost title which, as its name and tagline imply, is intended as a criticism of homophobia and a celebration of queer lifestyles, handled with all the subtlety you'd expect of a 90's game tackling such subjects.  Essentially, it's a Might and Magic or Wizardry styled dungeon crawl with a lot of class names and equipment replaced with 'gayer' equivalents - Queers, Drag Queens, Lesbians and Guppies are your classes and equipment includes condoms, press-on nails, blowdryers and purses.  Enemies include homophobic cops, TV preachers, rednecks and neo-nazis, all with their own (perhaps intentionally) low-quality renders and distorted voice clips containing all manner of slurs.  It also unfortunately carries on the design tropes of many early dungeon crawlers in this vein - there is little attempt to balance encounters to the player's level at all, so one fight can be dead easy while the next completely destroys your party.  The interface is also clunky (no keyboard control option - every single action is mouse driven) and there's no minimap or online help file.  Only a partial manual has been found and scanned online as well, so you have little choice but to puzzle things out on your own.  Being one of the first LGBTQ-centered games ever made makes GayBlade worth a look as a historical curiosity, but it's only amusing to a point. 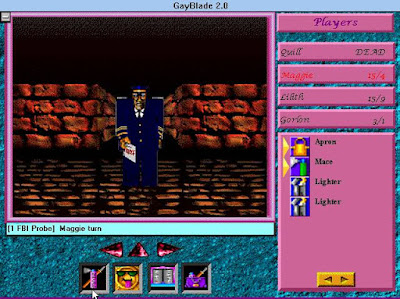