Golf Story is an odd concept - mixing golf with RPG-styled equipment upgrades and levels - but it works quite well for what it sets out to do.  The main story of the game is a humble one, starring a golfer trying to regain his passion for the sport, so it probably won't win any awards with people looking for high stakes or character-driven narratives.  Its gameplay is relatively fresh, though, having the player not just play courses against other golfers, but complete a variety of challenges - from only hitting the ball into bunkers on their way to the green to bouncing balls off turtles to "feeding the fish" with well-placed shots, there are dozens of them, and all reward extra experience (which goes into your golfer's stats) and money (which goes toward buying new equipment).  Curiously, though, upgrading one's Power stat will actually downgrade their other stats, requiring a careful balance of spent points to ensure one can still land shots where they need to.  Other hazards crop up too, as many courses are in considerable disrepair and overrun with malevolent wildlife (particularly gophers that like to pick your ball up and drop it into bunkers, making your next shot much more difficult).  It may not be the deepest example of either genre, but Golf Story is a relaxing and surprisingly entertaining title for RPG fans and sports fans alike. 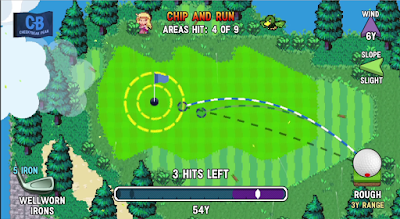