Quintet never really got their footing back after Terranigma was passed up for a North American release; they hung on for a few more years, taking another crack or two at the RPG limelight, but eventually gave way to making mediocre budget titles before fading into obscurity.  Granstream Saga was an attempt to bring their usual style of grim-themed RPGs to a new generation, but it struggled to make headway among other juggernauts of the time (most particularly Final Fantasy VII, released the year prior).  This probably wasn't helped by its extremely restricted design -  the game is almost entirely linear with no chance to deviate from the set story path (even level gains are all pre-scripted events) and the combat is focused entirely on repetitious one-on-one duels, so it lacks the epic scale of other contemporary RPGs. Somehow it feels both high-budget and low-budget at the same time, with a lot of high-quality animated cutscenes, well-rendered environments and decent VO for the time, though the 3D animation is rather stiff in comparison and a lot of elements are depicted only through text rather than as onscreen events.  Unlike most lackluster RPGs, though, it recognizes its own shortcomings, providing a relatively brisk experience (15-20 hours) that doesn't overstay its welcome too much.  Granstream might hold some appeal for fans of games like Illusion of Gaia, Terranigma and Soul Blazer on the SNES, but it certainly doesn't outshine any of them. 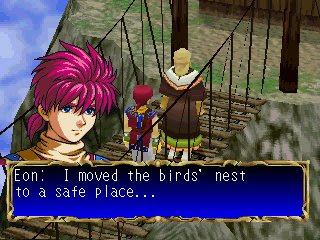