There weren't a whole lot of localized RPGs on the original Game Boy, but Great Greed is one that manages to stand out from the pack and deliver a relatively fresh and unique experience.  Set in the "Greene Kingdom", a world with seven continents, the sense of humor is very apparent, with tons of character and location themed after food (Candy, Calorie, Lunch Box, Microwave, Sushi, etc) and silly enemies to match, including "Eye Cakes" and "Spud Buds".  Combat is surprisingly fast-paced, with both you and your opponents' actions occurring simultaneously and all actions being executed at the press of a single button - A is your normal attack, B is defend and the four directions on the D-pad are each mapped to one spell at a time (which must be equipped outside of battle).  It also had a fairly unique feature for its time in periodic Auto Saves, so if you venture into an area you can't handle and get whacked, you aren't totally SOL (which would make slightly more sense if saves were restricted, though you can also do so at any time via the Select button).  Further humor also comes from the choice at the end - after saving the world you can marry virtually any member of the royal family, even splitting up the king and queen to take one of their places.  As you can tell by the fact that you probably haven't heard of it, Great Greed wasn't a particularly strong seller and is pretty spedy these days; still, if you come across a copy, it's worth a look for its innovative elements and strange humor. 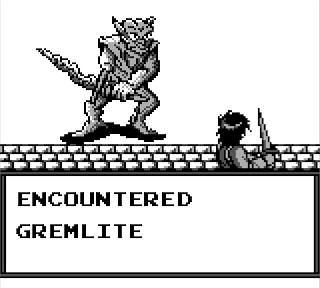