Final Fantasy XIII-2 was released two years after the much-hated original game, and sadly, it's still a pretty abysmal experience.  Though at the very least I can say that it addresses a few fan complaints and overall does a better job of what the original set out to accomplish (whether that was worth doing in the first place, however, is a topic I've already made my stance quite clear on). The game's action is considerably improved, with cleaner shots and dynamic setpieces during battles that lend it more of an action movie-like feel.  Cutscenes are also spiced-up slightly by incorporating QTE events, allowing you to score damage on your opponents before the fight properly begins or deal extra damage during big attacks by mashing buttons or tilting control sticks instead of just sitting idle. There was also an attempt made to have the game feel less like a strictly linear and braindead experience, giving the player many more wide-open areas to explore, hidden objects to find, enemies randomly spawning on the map (though one can still avoid combat if they move far enough away before the onscreen gauge falls into the red) and the ability to actually traverse obstacles with a jump button instead of an automated event; small touches in the grand scheme, but they do make gameplay at least a little more engaging.  However, the rest of XIII-2's design still leaves much to be desired. The constant banter from onscreen NPCs clutters up the screen and becomes an earsore to listen to after a while, and the "multiple choice" dialog prompts are just baffling in their existence.  Basically you get to pick one of four options at set points in the story, getting different dialog from each one, but that's it; you can't also pick the other answers for more information a la a CRPG.  Sorry, but I'm not playing through your game four different times just to see all the possible dialog, especially when it's no less banal than the first game's and none of your choices have any actual impact on the narrative anyhow.  XIII-2 is a better game than the first, but not by nearly enough; with only small tweaks made to a fundamentally fatally flawed experience, it is the perfect example of polishing a turd. 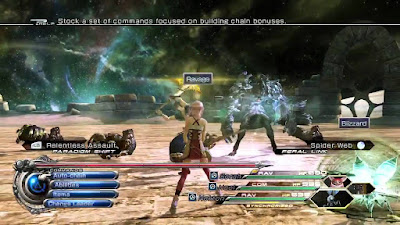