Final Fantasy Tactics A2: Grimoire of the Rift

Final Fantasy Tactics Advance was a somewhat divisive game among the fanbase, but it garnered a lot of positive reviews regardless and was a strong seller besides (over 2 million copies worldwide), so of course a sequel was greenlit right away.  However, it ultimately didn't see a release until five years passed and a new handheld system became the market leader, leading to the awkwardly-abbreviated title.  While mostly the same game at its core, some criticisms of the original are addressed - missions have more variety now, and the much-maligned Judge system is also overhauled so that you don't have characters jailed when you break a law, instead just losing rewards and privileges (pre-selected bonuses) and being unable to revive fallen party members for that fight.  The game also utilizes the DS touch screen for more convenient menuing, and has higher-resolution visuals that allow for some flashier effects (like summons).  The story is a fairly generic one; decent enough for what it is, though the meta element of the first FFTA is largely absent.  If you enjoyed the original FFTA you'll probably like this one too, but if you're still pining for another grimdark fantasy tale more akin to the original Final Fantasy Tactics, well, you're probably better off picking up the Tactics Ogre remake on PSP instead. 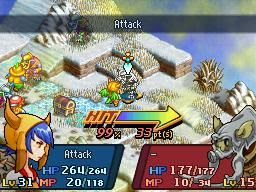