Many Final Fantasy fans, casual and die-hard alike, make no secret of their disdain for all things related to its thirteenth entry.  But there is something of a ray of hope in Type-0; a spinoff game set in the same universe, though in a different time period and with a much more grounded storyline.  To that end you control "Class Zero", a team of fourteen characters with their own sets of abilities (reminiscent of the archetypal Final Fantasy job classes) and take them, in squads of three, through various missions.  Gameplay is much more involved than the others in the Fabula Nova Crystallis series, playing more like a proper action game with unique abilities and mechanics to each character (though rather clumsy controls and collision detection), and the occasional light real time strategy battle adds some diversity. The player is free to explore the world between missions (including a world map!) and interact with characters within Akademia to fill out various subplots, get more lore on the setting and utilize a plethora of optional challenges and online features to keep the game relatively fresh.  Type-0 is by no means amazing, but when you go from two godawful games to a mediocre game, you've still seen quite a bit of improvement. 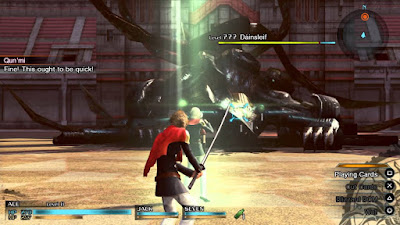