One of many games to come out that draws obvious inspiration from Final Fantasy Tactics, Fell Seal is one that I didn't find much of worth in.  Somehow it looks both really good and really cheap, with intricate detail in its backdrops and portraits and stiff, lifeless animation for its in-game characters, which sucks the energy right out of what should be tense, exciting battles.  The mix-and-match class and ability system is here too, though it doesn't improve things any - it's just a small handful of FFT's classes, items and abilities, either made stupidly overpowered (one of the very first helmets you get cuts ice damage by 50% while the gold-steal ability does 85% of the damage of a normal attack AND steals a big wad of cash, meaning there's really no reason to use your standard attack ever again) or debuffed to the point of being worthless.  Combat is ungodly slow and drawn-out, with every character you fight being an overleveled meatshield that takes tons of hits to bring down, and the fact that they will do things like steal items from you with unavoidable counter moves and then promptly use them themselves to deliberately waste your resources and drag the fight out further is downright frustrating.  Cutscenes drag on and on, with no interesting characters, lazy, predictable plot points and wooden dialog that's about as fun to sit through as a live reading of a phone book; but of course the game's marketing lists 'mature storytelling' as one of its selling points, ensuring that a legion of 13-year-old morons and 41-year-old unemployable manchildren will launch a hatred campaign against you if you criticize it for any reason.  Not out of any actual fondness for Fell Seal, mind you, but just to make sure everyone who crosses their path  knows that their phrenology tests and cheevo lists and bookshelves full of PhD-level works (but nary a cracked spine on them, natch) prove they're supreme  Übermenschen with 193 IQs who are too smart and genetically superior for all the faggy baby 'casual' entertainment media lowbred simpletons like you enjoy and that you should totally take them seriously before you're penciled in for the next cross burning duder.  Basically, for a game that costs $30, it offers too little of value to be worth a purchase, especially when games like Shining Force, Horizon's Gate, Heroes of Might and Magic, Divinity Original Sin II, Triangle Strategy, Dark Deity, the XCOM series and even the games it clearly yearns to be compared to - Final Fantasy Tactics - can all be gotten at a comparable price and have leagues more to offer in terms of production design and content. 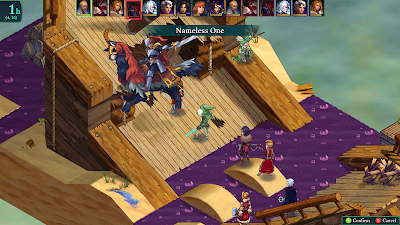