Fallout 76 is a game that has been quagmired in negativity from the word "Go", lacking the immersion of previous Fallouts by replacing all human NPCs with robots who dispense quests in the most sterile fashion imaginable, generally buggy design prone to frequent crashing, and preorder bonuses being fulfilled with much cheaper merchandise than was promised.  That, plus rampant and nearly-unchecked player cheating, security breaches in Bethesda's support system, an immensely overpriced in-game microtransaction system and a much-derided premium service that costs another $100 a year atop the already enormous price gouging present, have only worsened its image further, leading to it being known as one of the most cursed games of the modern era.

But beyond the storm of corporate meddling, is there a worthwhile game to be found?  Well, I suppose that all hinges on how much you enjoyed Fallout 4.  76 is essentially that with a mediocre multiplayer element tacked on, letting you explore a vast world, complete story quests at your leisure and build your own settlements, to either ally with other players against the odds or get into turf wars with them (if you can find a group that's willing to play fair and not just resort to readily-available cheating tools).  Subsequent patches have also reintroduced some humanoid NPCs, improving the game's immersion factor, and the underlying storyline is decent if unremarkable, giving you something to stay motivated in the course of all your extra-curricular settlement building and player interaction.  However, it retains many of the same problems Fallout 4 had, too.  Nothing you do ever feels like it makes much of a significant change in the world, and it really doesn't, as it's only ever acknowledged by other players - usually at the barrel of a gun while they try to tear down your buildings in search of profit.  The crafting system itself is arbitrary and makes little sense, particularly as half the things you build provide no tangible benefit and the system itself lacks some very common-sense things you'd expect to be included.  There's a certain overhanging frustration in the fact that you can build laser turrets, water purifiers and nuclear reactors out of trash you find laying around a ruined office building, but still can't build a functional vehicle because the game's still running on a code base that's over two decades old at this point (and with their shareholders pulling the chain and demanding profits RIGHT NOW, it's unlikely they'll have the time or resources to adopt a new engine anytime soon).

76's premise is a good one - an open-world free-for-all where you can shape the wasteland to your will - but like Fallout 4 before it, the execution falls several steps short.  Fallout is a free-roaming RPG franchise beloved by fans for its immersive storytelling and design, and online open-world sandbox shooters are known for their fast-paced, yet strategic gameplay; when 76 takes a mediocre storyline and pastes a half-baked version of Fortnite on top of it, it just becomes a lesser version of two well-established genre staples that doesn't end up pleasing fans of either.  That, plus all of the aforementioned unsavory elements of its launch and the subsequent money-making scammery associated with it, make it a game I simply can't recommend to anyone. 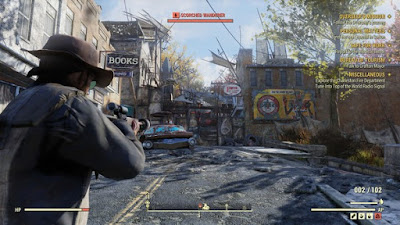