Regarded by some die-hard fans as the best game in the series, Daggerfall is certainly a substantial leap in quality over its predecessor.  The game now runs on a true 3D engine (Bethesda's own XnGine), the world is now a truly connected and cohesive one with over 15,000 towns and 750,000 NPCs, and the game even takes pains to simulate a virtual environment with various guilds the player can join to bolster their reputation, an economy where one can buy and sell various goods and even borrow money from banks, and fast travel has a more realistic element, with the player having different options like travelling by caravan, ship or just walking to save money (while taking much longer).  One can buy ships and horses to make navigation faster, and encountering certain enemies can have the player transform into a vampire, werewolf or wereboar (the former two of which would appear in later games as well).  There are even seven different possible endings to see, which gives the game some substantial replay value.  Make no mistake, though, that this is still a game which is largely procedurally generated - nearly every quest, dungeon, town and character one encounters is created by a random seed rather than a developer, and as a result of that and the dice-roll dependent gameplay, the game's difficulty tends to be very uneven.  You'll never be wanting for things to do in Daggerfall, but the fact that most of it is still generic, and its world not particularly interesting to see and interact with after a time, will likely leave you pining for later entries in the series. 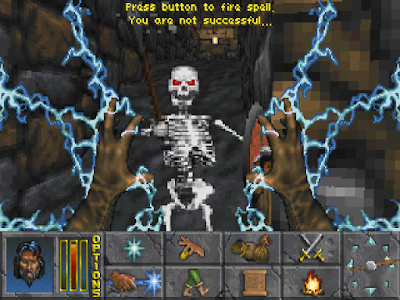