Originally built as a medieval gladiator combat game (hence the name), The Elder Scrolls soon developed into something much more sprawling and ambitious, promising a massive open-world RPG with gameplay and design inspired by Ultima Underworld and literally tens of thousands of square miles of terrain, replete with equally massive numbers of towns, NPCs and monsters.  As worlds of this scale weren't exactly feasible in the era, though (even with the advent of CD technology), something had to give - in this case, nearly all of the game is randomly generated, with terrain, towns, NPCs and dialog, and just about every quest the player encounters falling into cookie-cutter territory.  The world map is also not as big as marketing would suggest; if you simply go out expecting to walk to another town, you'll never get anywhere as you'll be stuck on an endless procedurally-generated map, so fast travel is the only real way to traverse the world.  Much like Ultima Underworld and many other CRPGs before it, the game is quite unforgiving in many respects - even escaping the first dungeon is a trial that took me several attempts owing to its aggressive enemies who never grant you a moment's respite.  That, plus the fact that every action one takes in the game is based upon a dice roll (even combat, resulting in battles just looking like you awkwardly flailing at a target and missing most of your strikes), makes the game more of a chore to complete than a grandiose adventure.  A cult classic and origin of a legendary franchise it may be, but Arena is not a very auspicious game by any measuring stick today. 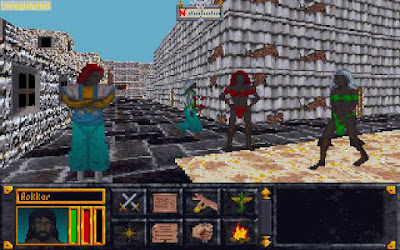