The second Wasteland-copycat game released by Electronic Arts in 1990, and like Fountain of Dreams, it's a rather creative concept - your character and his girlfriend are teleported to Hell and, as the title suggests, you try to rescue her and escape back to the world of the living.  The game's humor is pretty on-point throughout, with a lot of characters making rather flippant remarks about the sins that landed them here, and it liberally references the Divine Comedy throughout (with the first place you visit being Limbo, home to virtuous pagans).  You'll also encounter other people and locales of dubious virtue, from annoying clowns to waiting rooms with times reaching into the thousands of years to televangelists with their mouths permanently zippered shut.  Quite a few notorious figures appear, both real and fictional - from Hamlet to Juliet to Genghis Khan, Al Capone, Caesar and yes, even Adolf Hitler; some are just there for a bit of dialog, while others serve as foes and still others will join you in your quest (often with little prompting).  Fitting in with Bard's Tale, Wasteland and the other games with art direction by Nancy L. Fong, Escape has some delightfully detailed and grotesque character portraits with bits of animation to give them more personality.  The downside is it still has the same trappings as those games too -  the world state is saved to disk every time you enter or exit an area, which means collected treasure chests will not respawn (ever, even if you start a new game without completely reinstalling from master disks) but all of the enemies will, meaning you can potentially screw yourself over if you don't have enough resources to get through areas packed with monsters.  Also, like Fountain of Dreams, the whole thing is disappointingly short and threadbare, which squanders a great deal of what could have been done with the concept - few NPCs have any meaningful interactions, the narrative is disappointingly limited and several plot threads go without any satisfactory resolution, only three major locations exist (even less than Fountain had) and nearly all NPCs you can speak to use the same generic portrait; bafflingly, even some major characters do too.  Basically, it's just another example of EA being EA - taking a great concept formulated by a team of talented developers, writers and artists... and rushing it out the door in a shoddy and unfinished state, dooming their hard work to be forgotten in only a few months' time.  A terrible waste back in 1990 and still going awful today; that's Electronic Arts for you. 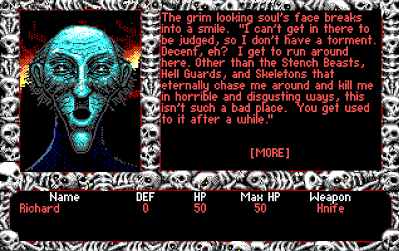