Shadowrun Returns, as its name implies, is a followup to the cult classic SNES game based on the tabletop RPG released two decades earlier, retaining many of its hallmarks but going for a turn-based tactical style of combat rather than real time action.  But does the long-awaited return of Shadowrun pay off, or is this one franchise that should have stayed dead and preserved its dignity? 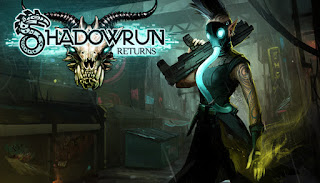 Shadowrun is a tabletop RPG set in a cyberpunk science-fantasy setting, and to be honest, I don't know much more about it than that, as I've never been a huge tabletop gaming guy.  However, I did hear about Shadowrun as a cult-classic SNES title, and upon playing it, I found quite a bit to like.  While it's far from perfect and has some prominent bugs and instances of poor balance, the storyline was creative and it melded elements of RPGs, action games and a good point-and-click adventure, creating a fun, engaging experience.  Also like any good adaptation, it didn't require familiarity with the source material to be engaging; even though I had no prior knowledge of Shadowrun, it was strong enough on its own merits to keep me interested.  All of this is doubly surprising considering it was made by Beam Software, a name mostly associated with average-to-bad licensed games on older platforms.
In the intervening years Shadowrun also saw a few other releases; a more action-oriented title on the Genesis with randomly generated missions, a Sega CD adventure game that only came out in Japan, and a team-based death first-person shooter on the Xbox.  The Genesis is probably the best-received of those, though I only played it briefly so I can't say much about it personally.
Shadowrun Returns, on the other hand, is very much a callback to the SNES game in terms of format and design.  The isometric viewpoint returns, as does the focus on storytelling and solving the odd puzzle to progress.  However, one is now afforded much more opportunity to customize their character - Jake Armitage in the original game was basically roped into being a jack-of-all trades, jacking into computer systems, casting spells and wielding firearms in roughly equal measure throughout the game.  Here, you can specialize or divvy up your skills as much as you like, and any skills you may lack can almost always be made up for by hiring other Shadowrunners for your team on missions.  Even out of combat, there is always a way to progress no matter how you've built your character, though it is admittedly rewarding to be able to bypass an obstacle just because you have a high enough skill (like having enough Charisma to smooth-talk your way past a guard) instead of going in swinging or forking out cash.  It reminds me quite a bit of Fallout in this regard, though the extremely linear format (broken up into stages) and an overall lack of optional objectives limit the number of times this comes into play more than I would like.
Combat is quite a bit deeper than the SNES game as well; no longer real-time, but instead it takes on a turn-based tactical format with a heavy emphasis on taking cover; not unlike the modern XCOM games.  Standing out in the open is almost always a pretty dumb move, as you're extremely vulnerable in that state; even ducking behind a wooden bench or something will significantly reduce your chance of being hit and taking critical damage (though obviously, sturdier cover is preferable whenever possible).  You're also afforded a lot more options depending upon your build - Shaman builds can cast defensive magic, set up barriers and summon spirits (whether using Fetishes or summoning them from elements in the environment); Deckers can bring drones into combat that they can attack with while remaining relatively safe themselves, or even hack things like turrets or cameras mid-battle to give your side an advantage; or, of course, you can just fall back on good old guns and melee weapons.  In fact, it's perfectly viable to just give a character a ton of strength and HP, deck them out with cybernetic upgrades, and have them run around pummeling enemies to death while tanking hit after hit if you really want to.
The strong writing is a definite plus that carries over into the game's sequels too.  It's a pretty simple murder mystery at its core, but along the way you encounter a lot of interesting characters, all of whom have their own distinct motivations and personalities, and they all get some pretty great lines of dialog too.  It works in plenty of Shadowrun's unique dark atmosphere too - channeling spirits, rampant corporate/police corruption and some genuinely disturbing scenes of people being exploited by lowlifes are all prominent elements in the narrative.  Of course, it also rapidly gives way to something significantly deeper and more threatening, and slowly peeling away the layers of mystery is where much of the fun of the experience lies.
Shadowrun Returns definitely isn't the highest-budget game of its time period - animation is relatively basic, characters are mostly shown as still portraits and there's no voice over - but what is there looks and sounds good at least.  The environments throughout show a stunning amount of detail - even something normally as drab as a warehouse looks amazing here and really gives you the itch to explore and find everything you can.  Sound effects and music are on the same level, with some surprisingly catchy tracks during battle.  Basically, they did a lot with a little here.  And as I've said too many times to count: I'd rather have no voice acting than bad/apathetic acting.
So, does Shadowrun Returns bring the series back to form?  I think it does.  While it's certainly not the most impressive game in terms of presentation or sheer amount of content, what it does have is highly polished and fun to experience, and the sheer amount of customization you're afforded gives it quite a bit of replay value despite its linearity and relatively short length.  The addition of Steam Workshop support also allows players to craft their own campaigns and add whatever gameplay tweaks they wish.  A solid game that paved the way for two amazing titles to come. 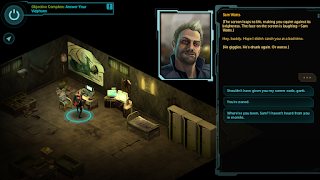 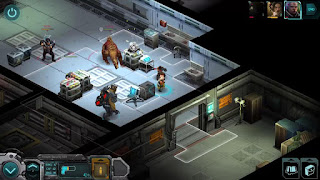