The third entry in the Xenosaga series marks an abrupt end for the franchise, and the last game Monolith created before they joined the Nintendo camp and started producing a very different style of game altogether.  But did the developers manage to come together and create a satisfactory conclusion to the trilogy, or was Xenosaga Episode III just a far cry from where the series started? 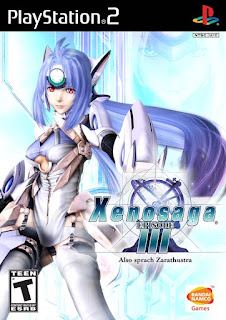 Xenosaga's first episode was a well-regarded one among most RPG fans, while its sequel was considerably less so; while it still did well critically, its reworked combat system and a number of bizarre and unnecessary changes caused the series to lose quite a bit of face with fans.  Monolith took several of these criticisms to heart, though, reworking the combat system once again for the third game, reintroducing most of the voice cast from 1 (though Joshua Seth is kept on as chaos and Michael Gough as Jin) and, as the box proudly boasts, shops have returned, so having to grind for items is now significantly less of an issue than it was in 2.  Code for the game has also been optimized quite a bit, resulting in generally shorter loading times for cutscenes and battles.

The art style for the game has been reworked too, striking a balance between the anime style of 1 and the realistic style of 2, which I felt was a welcome change.  Less welcome is the fact that the visual style is much darker overall - I recall very few instances of the sun shining or even many brighter colors anywhere in favor of an overall muted tone.  It matches the heavier mood of the game, admittedly, but it doesn't have the same appeal as its predecessors for the same reason.

Xenosaga III's combat system is the most 'traditional' of the three games, doing away with most of the elements from the first two in favor of one that resembles a traditional turn-based RPG.  Combos are largely done away with in favor of generic attack/magic/item commands, with a heavier focus on buffs and debuffs, using and countering status effects, and exploiting enemies' elemental weaknesses.  One can also spend a turn to swap reserve characters in and out mid-battle a la Final Fantasy X, which can help during longer battles.  Attack animations are also generally shorter, which helps improve the pacing.  A few twists are added to prevent combat from becoming too monotonous, though.  Boost returns once again, letting a character break the normal turn order to get a turn immediately.  Boost charges also fuel certain special attacks; finishing an enemy with one of these will result in a "Finish Strike", causing that character to earn extra experience and skill points.  These special moves will also power up with repeated use, with the exception of chaos's Imperial Judgment (which must be used on Gnosis-type enemies to power up) and Jr.'s Red Dragon (which must be used on either Gnosis or biological enemies).  Each character in a battle, friend and foe alike, also has a Break Gauge that depletes as they take damage; once it's fully depleted, they will be stunned and take extra damage for two turns.  Because of this, managing your party's Break to avoid being left vulnerable and trying to Break your enemies' guard both factor heavily into combat, particularly during boss battles.

A particularly strange element here is the Gnosis, who, as in the rest of the series, cause characters to "whiten" - repeated applications of this in combat will cause them to disintegrate and make them unavailable for the rest of the battle.  Items can reverse the process before it reaches the fatal point, though more often than not, you'll end the battle before then anyway.  It's also a bit jarring to see a character literally disintegrate in battle but be totally fine when you exit back to the menu after the fact.

E.S. combat remains relatively similar to the previous game; each turn you're given a pool of points to spend, which you can allocate however you wish among your mecha's current weapons.  One can also cast Ether to attack, Charge to recover HP, and use items, which can heal the entire party or even revive fallen allies (unlike the previous game).  Anima charges are built up as damage is inflicted, which fuel your most powerful attacks, and you'll occasionally get a "co-op" when attacking, causing one or more of your allies to jump in for a followup strike and a bit of extra damage.  As in the previous game, these fights are pretty spectacular to see, but not particularly deep on a strategic level.

Xenosaga III, like its predecessors, also doesn't skimp on the side content.  There are a number of optional quests to undertake, bosses to fight, weapons and accessories to find, and yes, even some fan service in the form of swimsuit outfits for every character if you want to see them fighting with almost nothing on; they're not quite as useful as in the old games as they no longer give bonus experience points, but they don't have the same drawback of giving you no defense either, so that's a plus.  My personal favorite, though, is the resident minigame HaKox.  A strange arcade title that plays like a cross of Gyromite and Lemmings, having you maneuver various characters from the game safely to a marked goal while pushing them out of the way of hazards with movable blocks mapped to the four face buttons.  You earn bonus points for grouping them together and sending them through all at once too, which is necessary to get the highest scores and prizes on many of the later levels.  Admittedly it is a little bizarre to see all the major characters from the story being pushed around a big grid by colored blocks, but the game is surprisingly addictive and fun - so much so that if it were released as a standalone game, I'd probably still buy it.

All things considered, I'd say that Xenosaga III does an admirable job of being a polished and complete-feeling game in spite of the series' abrupt conclusion.  However, it's not flawless; they were clearly trying to fit everything into the final chapter all at once, which results in quite a lot of confusing scenes coming all at once that take some time to unpack after.  The final area of the game is also probably the most blatant example of this - almost every major character and subplot from the series conveniently gathers here all at once, giving every character a chance to sneak in their final moments before the credits roll.  It's all well done considering the circumstances, but it still feels a bit convenient and, well, rushed.  Even with that, though, I think Xenosaga proves to be a solid conclusion to the trilogy, and despite it being extremely unlikely, I'd love to see the series get definitively concluded in some form down the road. 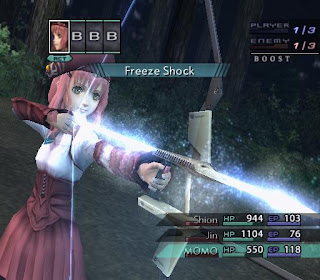 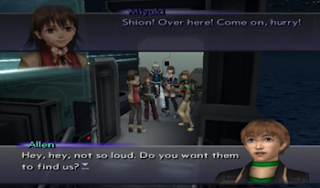