The second episode of Xenosaga saw its design and the series as a whole undergo a number of change-ups, in no small part due to a major change in the development team and a shift in management at Namco. But does Xenosaga Episode II still manage to provide a good RPG experience, or was this the start of a decline in quality as well as sales? 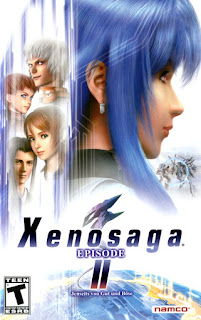 Episodic games are always a tough sell, even when they're well-done; after all, you're basically asking fans to pay for several games released at full cost or close to it right out of the gate, with no guarantee the full product will be any better than a single standalone game.  It's an even tougher sell in the RPG genre, where there have already been numerous highly acclaimed games with self-contained stories that span upwards of 30 hours in running time and more continue to be released on a regular basis, so cutting off your story partway through as a means to sell more content later is a very risky move.  The only company I can think of that saw any real success with the format was Telltale Games, but even they couldn't keep the momentum going; they ultimately spread themselves too thin with numerous licensing deals in a very short period, which led to poor worker morale and declining quality, culminating in a steady falloff in sales and a very abrupt shutdown and bankruptcy that left most of their employees out in the cold.

Xenosaga was unfortunately not an exception to the rule; while the first game in the series sold over one million copies and all three games did well critically, this wasn't enough to stave off declining sales with each entry.  Things probably also weren't aided by the fact that this was the only game in the trilogy to get a European release.  Yes, the second game, which drops you off right where the first game ended, with zero context given for who any of the characters are or what they're doing (and unlike 1 and 3, there is no in-game glossary or plot summary to get you caught up).  Alongside decreasing sales, changes in management at Namco led to the series being cut down from six episodes to three, Tetsuya Takahashi no longer being actively involved in the games' development (moving into a story writing and consultant role), and Soraya Saga leaving the project entirely, resulting in the later two games being considered inferior to the original by most fans.

The most immediately noticeable of these changes is in the presentation. Most of the characters have had their voice actors recast, and many of these changes are for the worse.  Shion in particular is often singled out as the worst change, now being voiced by Olivia Hack and far less expressive than Lia Sargent's take on the character.  The highlight of the new cast is definitely Joshua Seth, whose mellow voice fits chaos much more than Derek Prince (and the studio seemed to agree, as he was kept in the third game as well). The visual style has also seen a drastic revamp, going for a significantly more realistic feel rather than showing off the heavy anime inspiration the original had.

Combat has been heavily reworked from the original Xenosaga as well, attempting to incorporate more of both a puzzle element as well as a chain-combo system not unlike the latter two Shadow Hearts games.  Basically, each character now has one of three attack types (hit, pierce or slash) that deals more damage to certain enemies or less to others, and each enemy now has a sequence of buttons that will Break their guard; once broken, each following attack that turn will deal double damage. One can also knock down or pop an enemy into the air after a Break, which adds another bonus on top.  The Stock mechanic is built to take advantage of this too, letting you skip turns in order to save them up for later use - in this case, adding extra attacks onto your combos. It's a bit to get used to, but once you've mastered it, the game becomes too easy, letting you rack up thousands or even tens of thousands of points in damage per turn and even destroying bosses in very short order. This does achieve its goal of making many of XS1's underutilized characters more useful - Ziggy and MOMO are now virtual game breakers - but it does feel a bit one-track compared to most RPGs.

I was also glad to see mech battles - a key element of Xenogears but relegated to a mostly-useless footnote in Xenosaga I - make a return here. In this game, you get a new type of mech in the E.S., which is essentially a separate set of playable characters - though the main cast pilots them (with the choice of pilot determining what abilities they may use), they gain levels and experience completely separate from their pilots and are only usable at certain areas in the story.  Combat is changed up for them too, letting you spend a pool of points each turn to chain together sequences of attacks, defend to reduce damage and build Stock, or (with MOMO) cast Ether spells.  Landing attacks also ties into another mechanic called "Interrupt Attack" - a chance to intercept an enemy's strike and counter with your own, which grows as the IA meter fills but empties if you sustain a critical hit.  One must also be careful not to let their ES units be defeated, as the player cannot revive them if they fall.

Another strange changeup is the complete removal of both shops and money in favor of increased enemy drops. It's one thing to not have such a thing in your game, but to include it in the first game of the series and then leave it out of the second is just bizarre.  Even moreso considering you can still sell items as part of a sub quest to pay off Captain Matthews' debts. Even the developers seemed to think it was a bad decision, as Xenosaga III's box touts the return of shops as one of its defining features.

As in the first game, there are still numerous sidequests to complete - some filling in bits of story while others are mostly just for fun.  However, the rewards almost always leave something to be desired, often granting you a costly special move that does much less damage than a single good combo. I suppose you do at least get a cool animation out of them most of the time, but it's a little disheartening when your reward for a quest is something much more expensive (and much less effective) than a standard combo attack.

So, Xenosaga II, for both better and worse, is a drastically different experience from the first game. I actually liked a lot of the mechanical changes - the combat system is really fun and rewarding to master (maybe a little too much though, as mentioned) and seeing mech battles return to being a prominent element of the game was definitely welcome. Other changes are definitely for the worse, but even the devs realized they messed up, as they reinstated shops and nearly all of the original voice cast for the third game, and made sure to polish up and rebalance many of the changes this one made. Xenosaga II is a game I still enjoyed playing and recommend to anyone who asks, but its unquestionably the weakest of the trilogy. 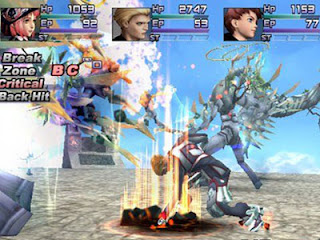 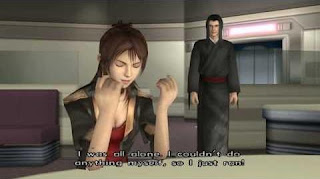