The first game created by several of the Xenogears alumni after their split from Square Enix, Xenosaga was planned to carry on the epic feel and planned episodic format of that game while pushing an original tale in a science fiction universe. But does Xenosaga's aiming for the stars pay off, or does it simply crash and burn on the launchpad? 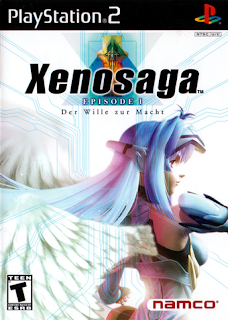 Xenogears was a heavily divisive game on the PS1, with fans praising its dark storytelling, complex characters, philosophical themes and impressive production design while others criticized it heavily for its clunky game design, dragging pace and being released in a very unfinished state: the second disk of the game was infamously almost nothing but flat exposition peppered with boss battles.  It was also clear that Tetsuya Takahashi had much bigger plans for Xenogears than Square was willing to accommodate - according to the Xenogears Perfect Works book, it was planned as one part of a six-episode saga, with numerous branches into other media as well.

As a result of this, Tetsuya Takahashi was one of many Square alumni to split from Square and form his own studio - in his case, forming Monilith Soft under Namco's banner. His first project there alongside Soraya Saga (Co-writer of Xenogears and his wife) was Xenosaga - a spiritual successor indented to carry on Xenogears' legacy and realize many of the ideas he originally had in mind for that franchise, theoretically free of company meddling.  Things didn't quite pan out as originally planned, but that's a tale we'll get into once I visit the sequels.

It's clear right away that Xenosaga was built on the same model as its predecessor, becoming less of a game and more of an epic anime series with some gameplay sprinkled in.  Indeed, a common criticism of the series is its brutally long cutscenes, which can stretch upwards of 30 minutes at times (which is especially prominent in the first game, but somewhat better in the sequels). However, they do put in a lot of effort to make sure they're always worth watching - they're well-staged and shot, smartly written and even have some very high quality voice over for the time, featuring well known  talent like Lia Sargent, Richard Epcar and Derek Stephen Prince as key characters.  Certainly a nice contrast to many modern RPGs, which seem to mostly consist of dull incidental dialog warbled out by apathetic actors while their characters just stand around and the camera cuts spastically between 300 random angles to keep you from falling asleep; waste of good money if you ask me.

The writing in Xenosaga also proves to be a stark contrast in another big regard.  Like it's predecessor it doesn't shy away from philosophical themes; hell, every game's title is a direct reference to one of Friedrich Nietzsche's works, all of which also get name-dropped (in English) in their respective games. However, its storytelling doesn't get swallowed up by its themes and become pretentious; the onscreen events are very much driven by the characters, and each one shows their own flaws, talents and motivations that lead them to do what they do.  Nobody fits into the mold of a cliché or becomes an overt Mary Sue, and even the villains are relatable on some level.  It really does highlight Takahashi and Saga's talents that made Final Fantasy 6 and Xenogears shine, and definitely lends Xenosaga a human element that few other RPGs I've ever played have matched.

But while Xenosaga's primary focus is on its narrative and not its gameplay, that isn't to say what gameplay is there is lacking; far from it.  Combat operates on a somewhat similar principle to Xenogears, letting the player chain together moves into combination attacks; they will regenerate 4 AP a turn and can bank up to 6, which equals out to a three-hit combo from a full bar (two normal attacks and a more powerful "Tech Attack" which generally must be unlocked and equipped first).  In addition, dealing damage will fill up the "BG" bar; once full, the player can use a Boost to immediately grant one of their players a turn, superceding all turns following theirs; enemies can use this too, however, so one must be wary of that, particularly later in the game when they will abuse it liberally to give themselves several turns in a row.  It quickly proves to be integral to winning some fights, too - in particular, one boss fight features an enemy that will immediately heal themself back to full once their health drops below half, so building up BG to sneak in enough turns and deal enough damage to defeat them before they can heal is key to winning.  Some characters can also summon an AGWS - essentially, a mecha - to fight within, effectively replacing their normal moveset and giving them an HP buffer.  However, I found that these generally weren't very worthwhile - unlike Xenogears, their stats aren't a huge leap over your base characters, and they tend to do too little damage and die too quickly to be effective, even after several upgrades.  I usually just stuck to fighting on foot for the duration, save for a few story scenes where I was forced to use an AGWS.

Another somewhat odd element of combat is the "Event Slot".  At the bottom right of the screen you will see a small icon that shifts every turn, and depending on what icon it displays, you will earn various bonuses on that turn.  For example, you may get extra Boost gauge from attacks, have a higher chance of inflicting a critical, or get extra Tech, Ether and Skill points from an enemy you defeat that turn (with a 2x, 4x or even 10x multiplier).  Indeed, sometimes it's better to manipulate turns and try to get a bonus than to let a battle end too soon.  That said, enemies also benefit from higher critical chance or Boost gains, so spending a Boost to deny them those bonuses can also prove important.

Xenosaga also goes out of its way to avoid a lot of things that were criticized about Xenogears.  Cutscenes are now skippable, so you no longer have to view them all again if you die on a boss fight after a long sequence of them.  You are also given warning before you pass a point of no return - generally entering an area much tougher than the previous one, giving you chance to power up and restock if need be.  In addition, while the plot is a mostly linear one, one can use the EVS at specially-marked save points to revisit any area they've previously been to, allowing them to grind or pick up items they may have missed the first time through.

Of course, there is also no shortage of side-content in the game.  There are four prominent minigames to play; AGWS Battle is just for fun and plays like a simpler version of Armored Core or Virtual On (albeit with a surprisingly large number of playable AGWS).  The Drill Game is a simple claw machine style game that allows you to win prizes, with better ones generally inside smaller objects.  XenoCard is a collectible card game which is also just for fun, but surprisingly complex (and collecting all the cards proves to be quite a time investment).  And finally, my personal favorite, the Casino, where you can play Poker or Blackjack to collect coins, which in turn can be traded for some very powerful items if you have enough patience to rack up a large enough total.  Basically, you won't be hurting for content  if you're a die-hard completionist, but if you're not, all of these can also safely be skipped as you make your way through the story.

While not flawless, Xenosaga is a well executed experience; arguably the best yet seen from the Monolith camp.  Its gameplay ultimately takes a back seat to the story, but remains fun and engaging regardless, and its world building is excellent, effectively immersing the player in a well-realized science fiction universe with a lot of religious and philosophical themes, yet never feeling overdone or pretentious in doing so.  Characters are wonderfully realized, getting you fully immersed in their tale, and the voice acting is of very high quality for 2003; easily on par with any prominent big-name anime that was popular at the time (and utilizing several actors thereof).  It may be largely ignored nowadays by its publisher (save for KOS-MOS appearing in the odd crossover game like Project X Zone), but it's widely regarded as one of the best RPGs on the PS2 for good reason, and is a game that more than a few modern "cinematic RPGs" should take some cues from in its production design. 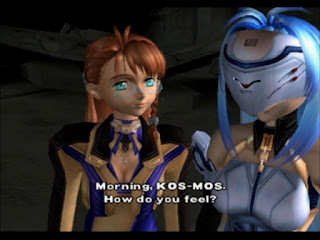 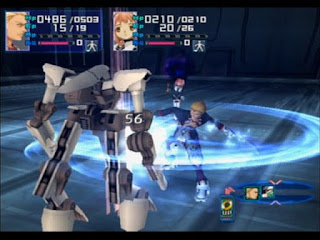