A remake of the original Romancing SaGa and the first in the trilogy to be released in the west after Square opted not to localize any of the Super Famicom titles, Minstrel Song was met with a mostly lukewarm reception; probably not aided by the fact it was released two years after the infamous Unlimited Saga.  But does it manage to prove a more player-friendly and engaging experience overall, or does it effectively alienate much of its intended fanbase just as Unlimited Saga did? 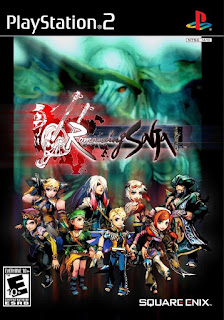 Romancing SaGa: Minstrel Song (localized simply as "Romancing SaGa"; I'll be referring to it by its subtitle to save confusion with the original Super Famicom game) was released to almost no fanfare that I can remember in 2005; what few fans SaGa had built up in its earlier years had largely departed with Unlimited Saga's hostile reception, and as a result this one sold even worse - a scant 60,000 copies in North America, which is staggeringly low for a Square Enix game. (For comparison, Unlimited Saga sold about 100,000 units).  However, I was never quite sure whether this was because it was just bad, or because Unlimited Saga had simply tarnished the franchise's reputation so badly that nobody bought it as a result.

Having played it since, though, I can say that it's definitely a case of the latter.  Romancing SaGa: Minstrel Song is a significantly more polished and playable game than Unlimited in most every respect, and even seemingly goes out of its way to address a lot of the criticisms its predecessor faced.  One prominent example of this is that every town in the game (and yes, they're explorable towns again; not just menus) has a character who explains most of the game's mechanics to you in detail, as well as providing a map so you can easily find all the shops, inns, trainers and so forth in that area.  During combat you'll also get brief bits of narration that explain particular mechanics to you - sparking techniques, getting a combo attack between two or more characters, or several new mechanics introduced here.  These include a Reverse (a somewhat misleading name; it simply indicates a character gets two attacks in a single turn with a weapon they have high proficiency in), a Surge (an unavoidable attack) or a Fulcrum (in which certain techs can combo more than once during a single turn).

Of course, even with these improvements, the core SaGa experience is still here.  Minstrel Song, like most SaGa games, relies on random chance for many things - learning new combat techniques, stat gains, quests and characters encountered - and definitely shows off its western influences, with the player afforded near-total freedom in customizing their party, recruiting or dismissing comrades, and able to explore much of the world at their leisure without restriction.  You're also given a choice of eight different protagonists to follow, though aside from a brief opening quest for each, they all more or less follow the same overarching story.  However, following this story also bucks most JRPG norms - indeed, you're not really even clued in that there is an overarching plot until you've visited several pubs across the world and followed various (semi-randomized) quest leads you're given by NPCs there.  An even-present character known as the Minstrel also appears here, serving as a strange combination of a music test, dismissing allies from your party at your request, and filling in the game's lore through various songs and stories.  He does also join your party on occasion when asked, though he will depart again the next time you visit a pub.

Unlike many SaGa games, though, character growth here is not entirely freeform.  It utilizes a skill and class system, though in a somewhat unconventional way.  For much of the early game, one learns assortments of skills by purchasing them in packages with Gems; for example, the Blacksmith package gives a character Club, Pyrology (fire magic) and Gathering skills, while the Rogue package gives Foil, Short Sword, Scimitar, Bow, Strategy, Covert and Trading.  Later on, one also earns the ability to buy skills separately, though they still get exponentially more expensive with each level so picking only a few to focus on is generally a good strategy.  Weapon skills tend to see the most use, giving a player a higher chance of sparking techniques in battle for that weapon, as well as reducing (or eliminating) wear on weapons for utilizing said skills.  Classes are unlocked once prerequisite skills reach a set level, and serve as equippable bonuses, usually giving resistance to certain elements or status effects (and not restricting the player in which skills and proficiencies they can use at any given time).  Skills also in turn govern Proficiencies, which grant the player abilities they can utilize in dungeons or field areas.  For example, the Gather skill allows them to use the Mine, Harvest and Excavate abilities to find items at certain points in the field, Survival allows them to learn Climbing to scale certain walls or Jump over pits, and Search allows them to find hidden treasure chests, ore, herbs, and other things.  Gems are earned by defeating enemies, but also using skills successfully in the field, which can be abused with some skills (Lurk and Move Silently in particular).  Some particular items or obstacles require a particular level of a Skill to overcome, though, and you are only afforded a finite number of Proficiency uses per skill level, so continuing to level them up is mandatory if you want to discover many of the game's most lucrative secrets.

As in many western RPGs, crafting and customizing weapons is also integrated into Minstrel Song.  Collecting herbs lets you create medicine at greatly reduced cost at an apothecary (a good thing, as most items in the game are quite expensive), and many weapons can be similarly tempered at blacksmiths, improving their stats in a number of ways.  Interestingly, one can also tweak a weapon's "attack mode" at a blacksmith; one can swap a weapon between Attack, Defense or Trick mode, which has a rock-paper-scissors effect against weapons of the other two types.  Defense beats Attack, Attack overcomes Trick, and Trick overcomes Defense.  Strangely one can also put a weapon in two of these modes at once, presumably giving them less damage overall but also less weakness.  (This also seems to be a rather moot point for the most part, as most enemies one encounters are monsters who don't even utilize traditional weapons).

Minstrel Song's presentation is also a stark contrast to the minimalistic one seen in Unlimited.  The game still utilizes a colorful watercolor fantasy style, though now all characters, towns and enemies are rendered and animated in full 3D; some of the towns and castles rendered this way look utterly fantastic, though many of the dungeons one encounters are very drab-looking in comparison.  Characters are modeled in an odd middle ground between SNES-styled chibi sprites and realistically-rendered characters like the later Final Fantasies, though I ultimately found this style unique and rather charming.  Unusually for the time, almost every line of dialog in the game is voice-acted, though the quality varies wildly; most of the main cast is fine, though many of the minor characters and town NPCs tend to overact and can be very irritating to listen to.  Kenji Ito once again provides the soundtrack here, and as per SaGa standards, it's excellent - every track in the game perfectly fits it setting, the combat themes are upbeat and epic, and it opens with a very cool animated sequence starring the Minstrel that introduces the game in a pretty stylish and clever way.

The game does still fall prey to some of the series' usual frustrating trappings, though.  Difficulty in some quests can be drastically harder than others; while most enemy groups you encounter do scale to your party's current power level, bosses generally have very high fixed stats, and you can frequently complete most of a dungeon and then get stomped at the end.  In some cases the game will show you a degree of mercy here and let you restart just before where you challenged them, but in others, you can have key items taken away (requiring you to reclaim them later) or just get a game over and have to reload.  The latter can be especially frustrating since you can only make a hard save at inns in towns.  The game does have a quicksave option, though as in many games of this type, it forces you to stop playing then and there and will immediately delete upon being loaded, so it's more for when real life calls and you don't want to lose progress.  You do have to take certain characters into your party, as well as undertake particular quests, to unlock many areas, which can mean booting a party member temporarily to accommodate them (and hoping you encounter them again later in another bar, which is a completely random occurrence).  Combat does also start to drag after a point, with most enemies stubbornly refusing to die unless you hit them hard and fast - mastering Combos and bolstering your spells and weapon skills to get Reverses, Surges and Fulcrums become an essential part of survival before long.

So, does Romancing SaGa prove to be a better game than Unlimited?  Undeniably.  It's a strange blend of western and eastern RPG sensibilities for sure, but it actually works out for the better here.  The gameplay manages to be largely intuitive and fun rather than opaque and irritating even with its frequent combat, and it's certainly not wanting for content with its vast world, eight playable characters and over 50 quests to experience in all (though it's not possible to see them all in a single playthrough, and choices made in some playthroughs will affect events in others, which also adds substantial replay value).  It takes a bit of time to get used to, but once you do, you'll find an interesting game with quite a lot to offer.  Whether you passed it up the first time due to Unlimited Saga leaving a bitter taste or just not knowing of its existence, I urge you to give this one a chance, because it's a pretty solid game.

(I'm also informed that despite being billed as a remake of the Super Famicom Romancing SaGa, this is a very different experience in almost every way, with only the major story beats remaining unchanged.  I haven't yet played that version to confirm this, however.) 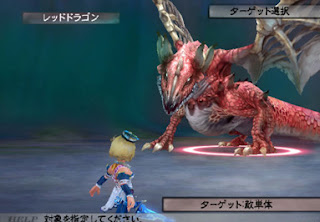 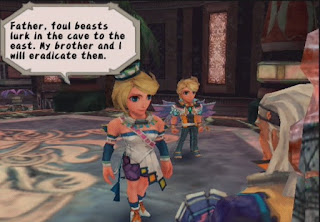