The ninth numbered Ys game debuted in early 2021 seemingly draws cues from other popular action games and RPGs, changing its mood considerably while retaining the Ys franchise's trademark fast-paced combat.  But does it prove to be a worthy successor to the Ys legacy, or is it just a misstep? 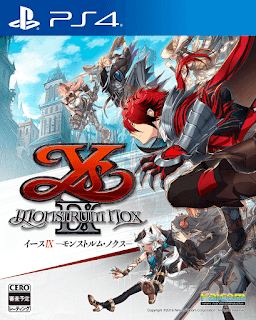 I've long pointed to Ys as one of the few long-running RPG franchises that's remained consistently good since its beginnings.  While some games in the series are definitely superior to others, I don't think I've played an Ys game I'd describe as "bad" - even the ones most people malign (Wanderers coming to mind) still managed to be entertaining in my book - mostly by being short enough to not wear out their welcome and still having some solid music.

Ys IX is definitely the first in a long while that caught me off-guard, though.  You're dropped into the middle of the story right away, with Adol attempting to escape from prison for unknown reasons and ending up "cursed" by a mysterious character's magic bullet, transforming into what I can only describe as a discount version of Nero from Devil May Cry: 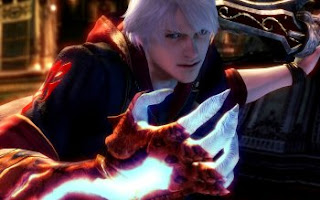 It's not just a cosmetic similarity, either - Adol actually copies Nero's ability to grab marked points in the environment to zip himself to them, and can even pull himself closer to enemies to close the distance for a melee attack more quickly.  Definitely an odd turn for Ys, which had Adol retain a fairly consistent blend of melee attacks and light magical skills throughout the series to this point.

The story is an odd turn too, and in fact reminded me quite a bit of Persona 3.  Adol meets up with other similarly cursed characters right away - the titular Monstrums - and together they fight back a force of monsters in a parallel reality that only they can interact with.  This actually plays relatively similarly to the base defense missions from Ys VIII, with Adol and his allies (all CPU-controlled) battling waves of monsters while trying to protect a crystal at the center; should it fall, they will immediately fail.  However, you will also get periodic buffs throughout these fights, giving you a slight edge against the progressively larger waves of enemies you face.

Also similar to Persona games is the fact that the game's geographical area is kept to a relatively small locale - the town of Balduq - with dungeons being relatively few in number this time around (and fairly short to boot).  However, you there are quite a few things to interact with in each area - shops and NPCs being just two.  You'll also find a number of hidden treasures, graffiti messages that often contain story cues or clues, and a number of landmarks to find as part of a subquest.  As more characters join your team, you'll unlock more ways to interact with the environment, which in turn will allow you to reach new areas and hidden items within them.  For example, White Cat lets you run up walls (slightly akin to Kingdom Hearts 3, though nowhere near as heavily-utilized), while Hawk will allow you to glide through the air, reaching distant places you couldn't normally get to.

The exploration and story are a definite departure from the Ys norm, but combat remains relatively unchanged from the party-based Ys games.  Adol and his allies all wield weapons with one of three properties - Slash, Pierce and Strike - each of which is effective and ineffective against different types of foes, necessitating that you swap between them as the situation warrants with the Circle button (though to my slight disappointment, the character you switch to swaps places with your old one, so you can no longer do my favorite trick of quickly switching characters to evade damage).  Each character will also gradually learn skills - either through repeated use of them in battle or by finding skill books - that can be mapped to the four face buttons and activated by holding R1 and pressing them.  Each enemy has a stun bar that fills as they take hits, and once it's full, you'll be given a few seconds to hit them unchallenged, making it a vital strategy for bosses.  Last-second blocks or dodges will also activate a "Flash Guard" or "Flash Move", slowing time for a brief period and letting the player get in a few free hits. Filling the meter at the bottom will also allow the current character to activate an Extra move - basically a limit break that deals hefty damage and makes them invulnerable as the animation plays.  It's as fast-paced and fun as ever, though one slight annoyance I had was the fact that there's no sound played when your character takes damage and often they won't even visibly be knocked back or flinch, so you can have your health deplete rapidly and not notice until it's too late.  Watching enemy attack animations and knowing exactly when to react to avoid taking damage is more important than ever in Ys IX.  Some elements can be frustrating too - chase sequence minigames and the tedious prison segments in particular (with most traps killing you in one hit on higher difficulties), but the game does at least throw you a bone here and give you an option to skip them if you die/fail them too many times, so that's nice at least.

Of course, there's also plenty here for the die-hard RPG fan.  The heavy focus on crafting from the other party-based Ys games returns (though traditional shops are in place too), and finding recipes for potions and medicine will help to give you an edge during paritcularly difficult battles.  There are numerous sidequests and optional areas to explore, a pretty large compendium to fill out, multiple difficulty levels to add replay value, as well as bonuses like a boss rush and a time attack mode. And of course, there are plenty of optional objectives to complete - from simple side-stories to collection quests to building up your home base by recruiting new characters throughout the journey.

While I was a bit put off by its strange premise and departure in style, Monstrum Nox proved to be another worthwhile Ys game.  There's a lot here for both action-oriented and die-hard completion RPG fans, and being able to explore the world in some ways not seen before in the series gives it a new twist for even long-time fans.  It takes a bit to get going, but once it does, you're in for a ride. 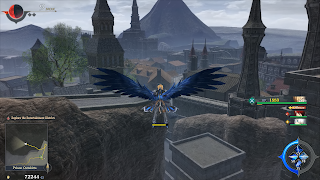 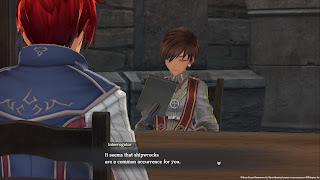 It does have some self-aware moments too; this line genuinely got a chuckle out of me