The third game in the Suikoden series marked the franchise's debut on the Playstation 2 and also a significant overhaul in its design and gameplay.  But does Suikoden III nonetheless prove to be another enthralling war epic, or does it simply tamper too much with the format and fall apart? 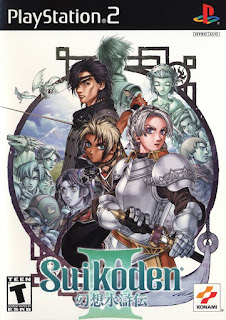 The original Suikoden was a low-key hit on the Playstation 1, providing early adopters a solid RPG that didn't attempt to stray into the realm of early 3D while also implementing some relatively unique mechanics - war battles, building up a castle, one-on-one duels and even some story changes and endings depending on who you recruit (and who ultimately survives the game's events).  Suikoden II didn't get nearly the same level of attention, largely due to Final Fantasy VII taking the world by storm and Konami only giving it an extremely limited printing run outside of Japan (reportedly as low as 30,000 copies); however, it vastly polished up the presentation and added much more content, becoming a fantastic sleeper hit and one of my personal favorite RPGs of all time.

I ended up being more than a little surprised that Konami continued to localize the series, continuing on with Suikoden III on the Playstation 2.  Suikoden III arguably proved to be its most successful entry, being released to overall positive reviews and becoming the best-selling game in the series in North America (and one of the few to remain relatively affordable on the secondary market).  Of course, that may have been in part due to it predating Final Fantasy X's release by about two months.

Like many classic RPG franchises that made the leap to the Playstation 2, though, Suikoden III definitely made quite a few changes to its existing format.  Instead of a linear story seen from a single character's perspective, you now see the game from the viewpoints of three different protagonists - Hugo, a child of the Karaya tribal clan who have been waging war against the Zexen knights; Chris Lightfellow, a Zexen knight herself, and Geddoe, head of a mercenary band who gets swept up in the conflict under the pretense of searching for a hero known as the "Fire Bringer".  Their stories frequently cross over - in fact, you see events concerning each character multiple times, just from that character's perspective - and some minor events can change based on another's actions (for example, if one character picks up a discarded armor on a certain path, it won't be there when the other two come through in their own scenario).  Occasionally you'll see a small subplot or side-story from another character's perspective, though these are almost always very brief scenes that only last a few minutes (and generally you aren't required to see them at all).  Of course, all three characters' stories eventually merge into one as they unite under a common banner to face a common foe, though this happens quite a bit later on than in the first two Suikodens, and you are still afforded some choices that affect later events even after that point.

The gameplay for Suikoden III is changed up quite a bit too.  The world design is much less open and more linear (slightly reminiscent of Final Fantasy X).  The world map is reduced to something more akin to Final Fantasy Tactics - you just move your character to various nodes at which lie towns, small dungeons or pathways to other areas.  As a result of this, you aren't afforded nearly as much freedom to explore and the game in general just feels considerably more cramped.  Towns are still large and sprawling and thankfully provide a handy minimap to help you navigate (something I would have killed for in Suikoden V), but dungeons feel considerably shorter and more constricted.  You also don't get a lot of opportunity to customizer your party for a big portion of the game - characters mostly come and go as the plot dictates, and in Hugo and Chris's stories, there's little stability for your main party, which can be frustrating as you're reluctant to give them equipment, not knowing if they'll vanish for a long period of time after.

Combat in the game still utilizes three different systems depending on the context, though they've each undergone a number of changes.  One-on-one duels are the least changed, just adding a gauge that swings momentum in your favor as you land hits or deal heavy damage, or in the opponent's if the opposite happens.  Small-scale battles once again pit up to six of your characters against a group of enemies, though they now act in pairs - you essentially control three units of two instead of six separate characters, which cuts down on inputs but also doesn't afford you as much fine control over your team.  On the other hand, each character now has a passive ability, and who you pair them up with can allow these to sync up and produce some powerful combos instead of just relying on the series' usual Unite attacks.  War battles are the same thing, but with more teams in play - you form small groups of six units, move them across a grid and engage enemy units, with both sides automatically duking it out for a few turns.  Combat is somewhat more exciting to watch, with characters actively moving around the field instead of standing in a static formation, though as a result it's significantly slower than the Playstation 1 games, which can get a little irritating during war battles or when you're travelling through a long dungeon and fighting mundane enemies constantly.  Fortunately, the encounter rate is pretty reasonable this time around, so combat doesn't become too grating to deal with.

This was also the first game in the series to incorporate the Skill system, affording the player a more interesting way to power up as well as a degree of character customization.  Essentially, each character begins with a set of skills, and each is also accompanied by a Growth Type.  These cover things like Damage, Accuracy, Swing (the number of times a character can hit per turn), Parry (the chance to block and counter an enemy's attack), Magic skills, and so forth.  Winning battles earns the player Skill Points, which they can use to boost these skills up - the better their Growth Type for a particular skill, the less points it will take them to power up that particular category.  Most of these are centered around combat, though a few can grant you other benefits - Health will restore a small amount of HP after battle, Potch Finder causes you to earn more money, and Appraisal will allow you to identify items in the field, to name a few.

Of course, this was also the first Suikoden to utilize a full-3D perspective, and the result is somewhat mixed.  Environments and characters look pretty good for an early PS2 game, though they're considerably less impressive in motion, with somewhat stiff and awkward movements.  The low-to-the-ground perspective takes some getting use to as well, especially with the constantly shifting camera making it tougher to get your bearings (probably why they included a minimap), and the limited draw distance and non-connected maps makes Suikoden III feel much less like a contiguous world and much more like a stage play.  The mood is significantly different from the first two games, with the much different direction the soundtrack takes playing a significant role in that.  Rather the epic Asian themes of earlier Suikodens, this one has a more natural, almost tribal sound to it, with a lot of flutes and drums rather than orchestral beats.  Easily the standout track is the one from the game's animated intro - Exceeding Love, performed by Himekami - which is beautifully orchestrated and, paired with the excellent visuals, really gets you in the mood for another epic tale.

All in all, Suikoden III is a definite shift in design sensibilities from the first two Suikodens, changing up a lot of its familiar (and traditional) RPG elements in favor of something more linear, but also putting greater focus on its characterizations and personal drama.  You're no longer playing as a silent protagonist and the story is no longer focused on defeating a single, definite foe from the outset, taking several interesting twists and turns throughout before you get the full picture of what's really going on.  I was reluctant to give it much of a chance for this reason for a long time, but able to see it with a clearer perspective now, I can definitely appreciate it as another great entry in one of my favorite franchises.  It's a shame that it was series creator Yoshitaka Murayama's final contribution to the series, leaving Konami before it was completed, but that didn't stop it from being a great game.  I definitely look forward to Eiyuden Chronicle: Hundred Heroes, especially if he can make it half as good as the first three Suikodens. 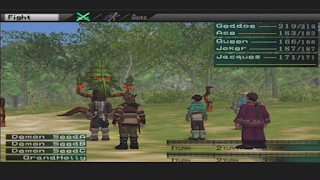 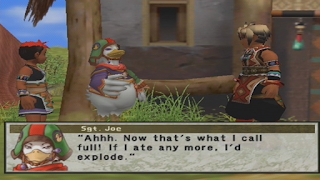