Banner Saga is a Nordic-inspired tactical RPG and the inaugural game of Stoic Studio, a company founded by three former BioWare employees.  But does the Banner Saga manage to put its developers' talents on display and provide a fun and memorable experience, or does this game simply get banished to the icy stretches of Hel? 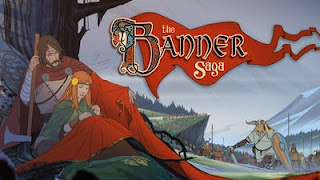 The Banner Saga caught some attention prior to its launch for a number of reasons, but mostly for the names behind its design - Alex Thomas, John Watson and Arnie Jorgensen, names long associated with big-name RPG giant BioWare.  After a successful Kickstarter campaign Banner Saga saw its initial public release with a free standalone multiplayer 'demo' in Banner Saga: Factions, showcasing the animation style and overall gameplay that would be featured in the single-player game (which wouldn't debut until nearly a year later).

Banner Saga promised a lot during its campaign, including subverting numerous RPG tropes (not focusing on a young hero, for example), downplaying the micromanagement element of most strategy RPGs and having a choice-based narrative that would force you to confront the consequences of your choices and force you to deal with loss.  To my surprise, though, they actually followed through on this quite well.  Your choices do really matter and will change the course of the story several times throughout - you'll face different battles, may recruit some characters (or lose some) and see story scenes that you wouldn't see otherwise - a pretty stark contrast to most games of this type I've played where 'choice' just feels like a joke more than anything, changing maybe a throwaway line of dialog or two and little else.  They didn't quite keep true to the "living with the consequences" angle, though, as you can save your game and reload if you get an unfavorable outcome, which dampens the immersion a bit.

I was also a little surprised to see the game draw some cues from the computer classic "The Oregon Trail", even directly referencing it at least twice.  As your troupe travels across the land, you'll have to maintain a steady income of supplies (which deplete each day), as well as rest to maintain morale and deal with a number of events - some are scripted while others are random, and can be both beneficial (finding useful items) or detrimental (villagers fighting and you having to decide what to do about it).  While a relatively minor part of the game overall, I nonetheless enjoyed this element, as it ties in well to the theme of choice and consequence in a pretty clever way and pays homage to a classic without feeling overly derivative.

There are only about seven classes in the game, but they prove distinct enough to keep the game fresh.  To name a few, Archers attack at range and are relatively speedy, but have low armor and Strength; Spearmen can attack from two spaces and have relatively average stats all around, while Varn (giants) are the biggest and slowest of units, takin up four spaces as opposed to humans taking up one, but have very high armor and attack power; positioning them properly and having them take the brunt of attacks for weaker makes up a substantial portion of your tactical decisions, especially early in the game.

The combat element of the game is relatively simple and, honestly, probably its weakest element.  It's a straightforward, turn-based team-VS-team affair, and terrain generally plays little role in the battle - it's more about moving and positioning your units effectively to turn things in your favor (or minimize disadvantage, whichever the case may be).  Each character is governed by a number of stats, but the two most prominent are Strength and Armor.  Strength is both your health and your attack damage - as it goes down, your attacks become less effective, and once it's depleted completely that character is KOed and out for the rest of the fight (and will be weakened in future battles if they aren't given a chance to rest).  Armor reduces the damage attacks inflict, and if it's particularly high, attacks have a much lower chance to deal any damage.  However, both allies and enemies can attack a unit's armor, dealing no Strength damage but weakening them against future attacks, and as the game's tutorial points out, you will have to do this a lot - heavily armored enemies are virtually impossible to defeat otherwise.  Each character also has Skills that aid them, doing things like knocking enemies back several spaces (and damaging anything in their path) or firing a piercing arrow that damages everything between it and its target.  Another prevalent mechanic is Willpower, which can be spent to fuel the aforementioned skills or deal extra damage or armor-breaking (with the maximum you can spend in a single action determined by another stat, Exertion).  Willpower does not regenerate on its own, but can be replenished if a unit takes no action in a turn or by using certain skills.  If an enemy falls in battle you will get a point of Willpower in your "Horn", a cache of up to seven points which can be allocated to the active character at the press of a button. The first handful of fights are pretty fun, but the lack of variety and flat, uninteresting battlefields that play little to no direct role in fights started to get to me after a while.  Worse, though, are some rather arbitrary and ridiculous difficulty spikes that forced me to turn down difficulty (like a boss character that possesses a dead character on the field, gets two turns in a row each time they do, and when killed, they pop out and become vulnerable for a single turn before doing it all again).  You're also given plenty of characters to utilize, but leveling them all up is infeasible owing to the extremely limited amount of Renown you're given (more on that shortly).  At the same time, though, your party will frequently be split up and your strongest units won't always be available to you in any given fight, and if all you have is a very underleveled squad to deal with a tough battle, you probably won't win no matter what you do.  Finding a balance would seem to be the key, but with no way to plan ahead other than checking a guide (which I feel goes contrary to what the uncertainty-based narrative tries to accomplish), it gets to be a frustrating endeavor.  As mentioned, I tried to play through all three games on Normal difficulty, but I was inevitably forced to switch to Easy once I hit one of the game's many roadblock boss fights.  The latter  two games do try to mitigate this shortcoming, letting you earn  some extra renown by completing various challenges in-battle or in the Training hall, but this only works to a point.  It's one of the rare times I'd say an immersion-breaking option to stop the story to power up would be warranted, even if it costs you days and/or resources.

After battle, you'll earn Renown, which serves as something of a catch-all currency.  Supplies can be bought with it, as can new troops and accessories, which grant small bonuses to units they're equipped to; however, they can only have one at a time equipped, and their rank must be sufficient to use it.  Raising a unit's rank is governed by Renown too, though a unit must also have a certain number of kills to their name before they can purchase a rank increase (and each one gets progressively more expensive).  This allows them to upgrade their stats and, once a stat hits a certain threshold, unlock skills to use in later battles.  Kills earned in training battles do count toward the number needed for a rank-up, though, so don't miss a chance to train when you can - it could make a big difference.

I was also impressed with the game's presentation.  Banner Saga makes the most of its minimal budget, with limited but expressive animation that draws influence from names like Eyvind Earle and Ralph Bakshi and a surprisingly good, moody soundtrack that carries the dark tone of the story surprisingly well.  Voice acting is minimal but used effectively, never feeling apathetic or stilted as in so many big budget RPGs of today.  The dialog in the game is excellently done too, playing the characters off of one another perfectly and making them feel like actual people with motivations and personalities, and not just stilted plot points.  There are a lot of nice bits of lore throughout (without ever relying on a lazy, impersonal "plot codex" to fill you in) and you really get wrapped up in the journey the characters undertake, feeling the gravity of the scenario and the tough choices they're forced to make.

All told, the Banner Saga is a pleasant surprise.  While obviously not a AAA big-budget game, its battle system definitely feels undercooked and it doesn't totally succeed at its stated goal of not having the player become attached to individual characters (let's face it, it always sucks when you dump a ton of time and valuable resources into powering up a character and then they die unceremoniously in a cutscene*), it shows that the minds behind it do have serious skills and experience under their belts and can spin a very captivating tale when they don't have hundreds of corporate stakeholders breathing down their necks.  There is some strong replayability owing to its choices and random elements actually having a substantial impact on events long-term, and the writing is great; grim in tone, yet very compelling, keeping you invested in its characters and in constant suspense at what's going to happen next.  You're frequently thrust into dilemmas where there's no easy answer, and knowing that lives could hang in the balance each time (and that choices, good or bad, can and will come back to bite you later) ultimately makes them very compelling.  It's a short game by modern standards (roughly fifteen hours), but what's there is gripping and well-told every step of the way, so I didn't mind the short length at all.  It's another testament to the fact that less is often more, especially when what you make comes from a place of passion and really highlights your talents instead of having a board of directors mandate that you disingenuously pander to everyone you can to maximize sales, dumb down the design and writing for the lowest common denominator, and ultimately churn out another compromised, mediocre and disposable product that'll be dumped in bargain bins in half a year (conveniently just in time for that publisher's next big AAA game!).  Money can buy all the good reviews you want from hack gaming sites, but it can't guarantee you real quality or passion in your games.

*I'm not entirely sure how one could offset this, but I think something akin to Valkyria Chronicles or Tactics Ogre's class-based levels - rather than individual character levels - could do the trick.  You'd still have the emotional impact of losing a unique character, but it wouldn't be as devastating a setback to you in future battles at least. 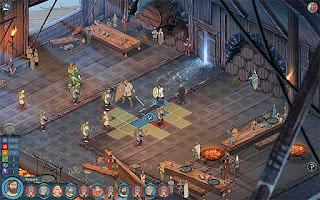 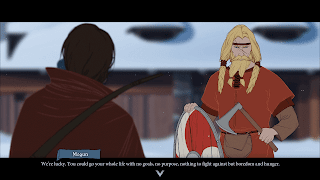 Developer: Stoic Studio
Publisher: Versus Evil
Platform: Windows, OS X, Linux, iOS, Android, PS4, XBox One, Switch
Released: 2014, 2016, 2018
Recommended Version:  All versions are more or less the same, save for some minor resolution/UI changes.  If you're buying on console I'd also recommend getting the physical release titled "The Banner Saga Trilogy", which bundles the game with both its sequels for a very good price (and includes a bonus art book, poster, soundtrack CD and in-game item).