The first official sequel to Final Fantasy Tactics was helmed by a very different team from the first (Yasumi Matsuno returned, though as the project's producer this time rather than writer/director), and was controversially made for a younger audience, with more cartoonish visuals and the grim tone of the original mostly absent. But does Tactics Advance prove to be a worthwhile return to Ivalice, or is this just a misstep for a sequel to a Playstation 1 classic? 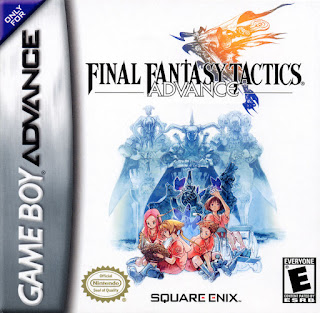 Final Fantasy Tactics was a big hit on the Playstation 1, taking the innovative class system of Final Fantasy and combining it with the complex and challenging turn-based strategy gameplay of Tactics Ogre, as well as a grim storyline on the backdrop of a country torn apart by war and famine. It is still a favorite of many to this day, myself included; in fact, I consider it to be the single best game to ever bear the Final Fantasy moniker.

Being a popular game and a successful spinoff for an already huge series, demand for a followup was high.  Another entry was announced five years later, though you can imagine the surprise at the announcement that it was being made for the Game Boy Advance, especially after Square's famous split from Nintendo years prior.  Not only that, but it was a sharp departure in tone from the original, set in an alternate Ivalice with several other races and a distinctly lighter, almost cartoony feel. In fact, like most Final Fantasy sequels, the only direct link to the original were its similar concepts and themes. Notable also is the fact that the game does lay a lot of the Ivalice Alliance series' groundwork -  numerous elements featured here would later be integrated into the mainline Ivalice with Final Fantasy XII, and Montblanc, first introduced in this game, would become the series' most prominent recurring character.

While a stark contrast in tone from the first game, Tactics Advance opens with a similar framing device to the original - the events of the game telling a story chronicled in a book - though it quickly goes more meta with the concept.  The game's three main characters are drawn into the story and end up in a fantasy world where they find their deepest desires coming true, though as the story unfolds, the implications of this steadily become more and more sinister.  A relatively archetypal concept, but it manages to put a clever twist on the idea while working in a few self-referential nods, so I ended up enjoying it regardless.

The gameplay remains mostly similar to the original game's, though with a somewhat simplified UI and mechanics. Like the first, the main story unfolds through a series of battles throughout the game, though there is much emphasis put in the game's mission-based layout here.  Besides the story quest, one can undertake numerous side-quests for various rewards (usually bonus items), generally placing restrictions on what units the player can utilize or requiring certain items to be undertaken first.  There are a total of 300 missions in the game, so it's certainly not lacking for content or longevity, and completing all of them will even earn the player an alternate ending.  Interestingly, as new locations are revealed by undertaking missions, the player can freely place them in empty slots on the map, effectively customizing Ivalice's layout.  Certain locations placed in certain slots can also unlock hidden items via "treasure hunts", though I'm unaware if the game itself provides any clues to this fact.

Final Fantasy's famous job system returns here too, with a grand total of 34 classes for the player to use.  However, there are now five playable races as well - Humans, Bangaa, Moogles, Viera and Nu Mou, and several jobs are exclusive to a particular race.  Nu Mous, for example, focus on magic and are the only ones who can utilize powerful classes like Alchemist, Sage and Morpher, while Bangaas are almost exclusively geared toward physical fighting.  Humans, as in most RPGs, are the versatile jack-of-all trades, able to do a little of everything but lacking many highly specialized classes or abilities.

The skill system is a slight departure from the first game's, however, and bears some resemblance to Final Fantasy IX's.  Many pieces of equipment have skills associated with them, and earning AP through actions in battle will distribute points among them; once the player has acquired a set amount of AP toward an ability, it is "mastered" and permanently added to their repertoire, allowing them to continue using it even if they change classes (though with some restrictions - obviously, one can't use a gun-based skill with a class that primarily uses swords, for example).  Mastering abilities is also required to unlock new classes; one cannot change class to Paladin unless they've mastered at least two abilities for the Soldier class, while the Alchemist can only be unlocked after mastering three White Mage skills and five Black Mage skills.

Another controversial gameplay change comes in the form of the Judge system.  Almost every battle in the game is governed by a Judge, who imposes bonuses and penalties on certain actions depending on the date.  For example, White Magic spells may be listed as "forbidden" while attacking with bows or swords could be encouraged.  Forbidden actions will be punished with a yellow card (imposing a penalty after the battle) or a red card (causing them to be imprisoned until freed by the player, usually at hefty cost, or a game over if the main character is red-carded).  As the game goes on, more and more laws are in play at once, encouraging the player to vary their team composition and strategies to prevent being locked down.  On the other hand, most enemies are bound by the same rules, so it can be to your advantage to take certain missions when certain laws are in effect to stop them from using their best moves. Performing an encouraged action will earn the player "Judge Points"; collecting enough of these will let the player do a Combo with all adjacent units, or summon a Totema, both of which can do hefty damage to enemies.  Sadly, even though the Judge is an active unit on the field at all times, one cannot target and defeat them to remove them from the fight.  However, the player can randomly earn "Law Cards" through battles that allow them to add or negate laws for a single fight, and there are a few lawless areas called "Jagd" where Judges will not appear, leaving the player to use whatever strategies they wish; however, any units that are KO'd at the end of the battle die permanently, so they come with significant risk as well.

Tactics Advance was one of many games to jump on the Game Boy Advance's multiplayer bandwagon too.  As one expects, they can pit their teams against one another in combat and win a few extra prizes, but players can also trade units and items, and even earn a few exclusive items and undertake missions not available when playing solo.  Nothing you'd sorely miss if you skipped it, but if you're really into the game, it can provide a few interesting new twists.

Final Fantasy Tactics Advance is an odd beast, carrying on the distinct gameplay style of its predecessor but bearing little resemblance to it in terms of storytelling or tone. If you're looking for a direct follow-up to the grim themes and high difficulty of the original Tactics, well, this isn't it. However, if you judge it on its own merits, you'll find a decent turn based strategy experience that tells a good tale in its own right, with some interesting and creative elements strewn throughout. It's worth checking out whether you're a newcomer or a long-time Final Fantasy fan, but either way, you'll get the most mileage from it if you keep an open mind. 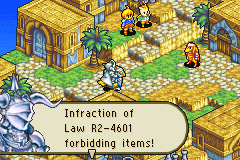 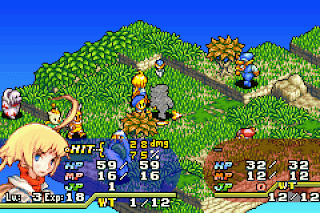