Tactics Ogre: Let Us Cling Together

The original Ogre Battle was a novel combination of real-time strategy and RPG elements with plenty of replay value owing to its random elements and multiple endings. Tactics Ogre, first released a few years after, continued that philosophy but changed the combat up into a turn-based tactical system.  But does it prove to be a worthy sequel to a cult classic, or does it simply pale in comparison? 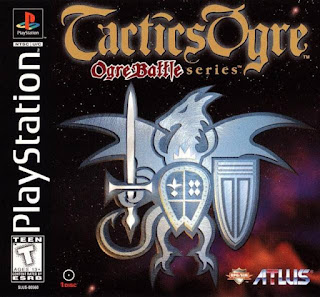 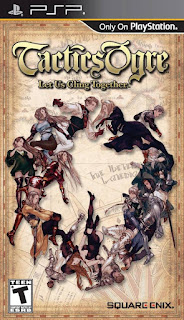 Ogre Battle was a low-key hit on the Super Nintendo; though released in very limited quantities (reportedly only 25,000 copies were released in North America), it won acclaim for its open-ended design, numerous endings and the sheer amount of customizability the player could have for units - not just equipment and class, but they could recruit virtually every unit they came up against in the game to their party.  From dragons to zombies to vampires to werewolves to the Pumpkin Mage, you certainly weren't wanting for options.
Tactics Ogre, later released on the Super Famicom and Saturn, wouldn't see a western release until several years later, when Atlus once again released it in very limited quantities on the Playstation.  While a well-received game among fans and critics, it was overshadowed by Square's Final Fantasy Tactics (another Yasumi Matsuno creation) coming out the same year.  In fact, the series wouldn't get much mainstream attention until more than a decade later, getting a high-quality PSP remake several years after Square bought out Quest and Yasumi Matsuno made several other games under their label (including Vagrant Story and Final Fantasy XII).
As the name implies, Tactics Ogre trades in the real-time strategy gameplay of the original Ogre Battle for a turn-based tactical combat system.  Battles are also smaller in scale, with skirmishes of 6-12 units on either side duking it out until one remains or a win/lose condition is met (such as defeating a particular unit).  A few unique elements are present, though.  A notable one is that mages don't start with full MP and gradually decrease over the course of the battle; quite the opposite, in fact.  Their MP actually starts at 0 and will slowly regenerate over the course of battle, so if you want to get in spells early, using items is a must.  One can also recruit numerous special units, enemy soldiers and even monsters to their army, though with some restrictions - only two "large" monster units can be in the player's fighting force at a time, and those who directly oppose a player's alignment or reputation will be much harder or even impossible to recruit.
As in the original game, Tactics Ogre's narrative is one that is left in significant part up to the player.  The story does branch out at several points depending on the player's choices, and there are several distinct story paths for the later chapters branching from key choices in preceding ones.  Reputation plays a major role once again - individual units in your army may agree or disagree with your decisions or grow to like you less if you let them fall in battle, and if you become too unpopular with them, they may leave your army entirely.  As mentioned above, others will will be harder to persuade to your side or even refuse to join you outright depending on previous choices, and these of course play into the ending too, showing more scenes or alternate outcomes depending on your choices throughout (though considerably fewer in number than Ogre Battle's 20+ possible ends).
Character customization is once again a huge part of the game, and there are certainly no shortage of options in Tactics Ogre.   Almost any character can utilize basic classes like Soldiers, Wizards and Beast Tamers, but once stat and alignment requirements are met, stronger classes like Dragoons and Terror Knights become available, having unique and powerful abilities and often complementing other units (Warlocks can power up Golems, for example).  Earning new spells (especially ones that sync up with a character's elemental affinity) is also a challenge, and the PSP remake adds another layer to this in the form of Tarot cards - as in the original game, collecting one will raise (or lower) a character's stat, and they can be used as items in battle to grant temporary positive statuses on an ally or negative ones on an enemy.  A new Rogue class is also present in this version - a strong, but rather fragile unit that can turn cards into traps for enemies to spring, and disarm traps on the field to gain more cards.  Figuring out which cards affect which stats, and having appropriate units collect them, quickly becomes essential in this version.
As in most of Matsuno's games, learning the ins and out of the mechanics are mandatory to succeeding in the game.  The difficulty quickly ramps up, with many fights even early on being all but unwinnable unless you've spent a significant amount of time honing your team (particularly ones where you have to defend a single vulnerable unit from death throughout).  This is further enforced by the fact that the AI is almost too good - enemies will do their best to target highlighted characters (costing you the mission or a potentially useful recruit for future battles), mages always target your weakest fighters, and if left alone for any period of time, injured units will retreat, heal themselves and leap right back into the fight.  This might be the only strategy game I've seen where the enemies will try to win by sheer attrition.  This is mitigated to a degree in the PSP version, which allows the player to rewind up to 50 turns in battle, though they were smart enough to disallow "scumming" with this feature - rewinding after a blocked hit and picking the exact same move again will always have the same result, so it's not as abusable as you may believe.  Still, it's also a good idea not to rely on this too much, as fights will only get harder and just barely scraping by in each one with repeated rewinds will make winning in the final stretch of the game all but impossible.

Tactics Ogre, like all of Matsuno's works, is one that shows a love for storytelling and the mechanical elements in every facet - the narrative is a dark and complex one, the gameplay pulls no punches with its difficulty, and it's a very deep, complex experience that will require a lot of experimentation and fine-tuning to find your niche in.  Still, it's an ordeal you're glad to undertake because it's all so well-done; his passion shines through and gets you invested in the world he's weaved, ensuring that you want to puzzle out a road to success and see your way to all of the possible story paths and endings it has to offer.  Definitely not an ideal choice for beginners to the genre, but those who want to see an intricate tactical experience and some finely-detailed lore and worldbuilding will find a lot to enjoy in Tactics Ogre. 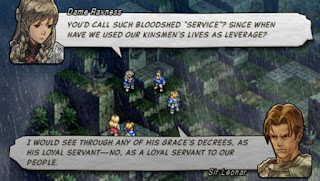 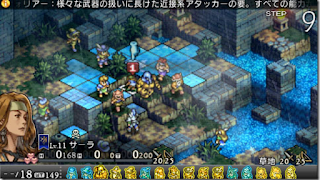 Developer: Quest, Square Enix
Publisher: Quest, Riverhillsoft, Atlus, Square Enix
Platform: Super Famicom, Sega Saturn, Playstation 1, Playstation Portable, Switch, Playstation 4, Playstation 5, PC
Released: 1995, 1996, 1998, 2010, 2022
Recommended Version:  The 2022 rerelease ("Reborn") is a marked improvement over the previous versions, adding in voiceover, revamping the UI and overhauling the leveling system so that individual characters - not classes - have levels, which greatly cuts down on grinding.  The level is capped but will gradually increase as the story goes on (plus you can still train up weapon/magic skills in training battles), and you also earn and equip skills more organically in this version, not having to grind a ton of TP to unlock everything.  Bump that version up half a star.