Most first-person dungeon crawling experiences on the NES were relatively mediocre ports of computer games, but Swords and Serpents was an exception, being built exclusively for the system and taking advantage of its capabilities to deliver something relatively unique for the genre.  But does it prove to be a satisfying experience for genre fans, or are they simply better off sticking to MS-DOS? 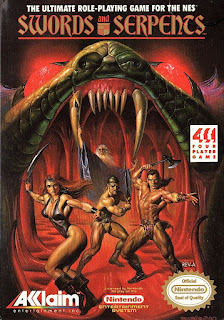 The NES has several iconic RPGs, but nearly all of them are Japanese in origin.  While most obviously drew inspiration from early CRPGs - Dragon Quest and Final Fantasy being two prominent examples - they took advantage of the hardware's capabilities to create a fresh and new experience that looked and sounded good, as well as making substantial interface improvements and curbing a lot of the overly irritating quirks that made those games difficult to enjoy for all but the most masochistic gamers.  While made for a younger audience, many older gamers found them more fun as well, leading to a split in the genre that drove both camps to up their efforts for later projects.
Most ports of computer games to the system didn't fare quite as well, doing little to tone down the irritating elements of the originals and adding plenty of bugs of their own.  Names were changed, items didn't work as they should, and the push to add graphics and sound mostly just made them slower and less fun to play.  Swords and Serpents was a definite oddity, however; being made by a western company and specifically for the NES definitely set it apart.
Further setting it apart was the fact that it was a slightly more actiony take on the genre, with a simpler UI, relatively fast-paced combat, little focus on stats and even multiplayer support; if one had an NES Satellite or Four Score, they could have up to three friends join them on the adventure, each controlling one of the four party characters.  The game put a relatively minimal focus on stats (paring it down to just Strength, Intelligence and Agility), has only three classes and keeps a minimap on screen at all times, making it one of the easiest games of its type to pick up and play too.
Of course, the game isn't entirely a cakewalk or it wouldn't be particularly fun.  Random encounters are frequent, and locating a temple so one can heal up and restore their MP quickly becomes key to not getting overwhelmed by their sheer frequency.  Finding clues and new spells hidden throughout the game, saving money to upgrade equipment, and finding shortcuts back to earlier floors to solve puzzles are other key elements of the experience.  Floors are also relatively large, so it may pay off to have maps handy (or make your own) regardless of the minimap present on the screen.
Interestingly for an RPG on the NES, Swords and Serpents features no battery backup, instead opting for a password system.  It's implemented in a rather strange way, though, as there is not one, but FIVE passwords - one to track your progress in the dungeon, the other for each of your four characters.  This does theoretically allow each player to power up their characters separately on their own time, but this does come with a couple of drawbacks.  First is that you have to punch all five passwords in each time you game over or turn the console off, and second is that gained experience resets to zero each time you do.  So if you're even just a few points away from a level and get wiped or turn the game off, you have to start from scratch at whatever level your last password recorded.
Swords and Serpents, all in all, is a competent and entertaining dungeon crawler.  It reaps the benefits of being built for the NES console. having some nicely detailed visuals, relatively good music (by George Sanger) and sound, and a simple, easy-to-use UI.  The option to have multiplayer gameplay is a novel one too, if somewhat underfeatured, and while somewhat clumsily implemented, one can also power up their characters separately without having to use the same cartridge.  It may not reach the plateau of being a classic of the genre, but it's a fun, decently-long and well-made experience that won't break your wallet. 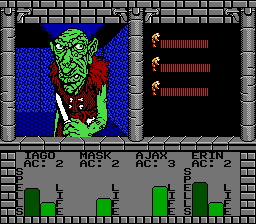 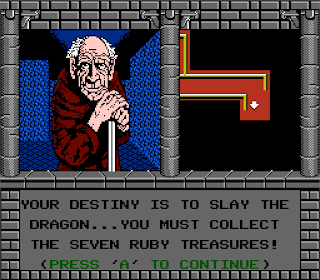