The game that named an entire subgenre and defined nearly all of its tropes, Rogue is undeniably an influential game. But does it still remain a fun experience despite inspiring thousands of games in the forty years since its original release, or is this one doomed to only be remembered as a historical footnote? 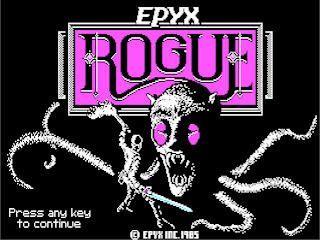 Rogue.  Even if you've never played the game firsthand, you know of its legacy.  Released in the early '80s for Unix-based mainframes, it was later given a commercial release across many different platforms by Epyx.  While "video gaming" wasn't exactly a huge thing yet at that time, Rogue was nevertheless such a popular and influential game that it spawned several clone games (a few early examples being Hack and Moria) and, over the following years, would ultimately came to named an entire subgenre of RPGs (Roguelikes) that all drew from the same basic premise but added their own features and layers of complexity.  The original Rogue has certainly had no trouble being remembered either, with numerous source ports, clones and remakes being developed and released by fans across every platform imaginable to this day.

My experience is a relatively strange one.  While I have played a number of roguelikes in my time (and reviewed several on this site), I didn't actually try out Rogue until its recent release on Steam.  Seeing as it was only $3, I figured I may as well see what all the fuss was about, so I went ahead and picked it up.  After playing it for a time, though, I can certainly see why it has the reputation it does.  Coming from an era where even graphics weren't the norm (the title screen above is the only one in the game - all the rest is presented with ASCII symbols and text), it had quite a lot to offer on a gameplay front.

The all-important genre staple, of course, is that Rogue takes place entirely within a dungeon that's procedurally generated each time you play.  Each of the floors you visit is made up of square rooms or mazes of varying sizes, connected by doors and hallways that may be hidden, requiring the player to actively search to find them.  Each room can contain enemies (sometimes a lot of them), traps, or a variety of items - potions, scrolls, food, weapons, rings and armor, which may have positive or negative variables applied to boost or lower their effectiveness.  Gold exists too, though there are no shops in the game; it's simply tallied for points on the game over screen (something that Fatal Labyrinth on the Sega Genesis would poke fun at; in that game, more gold gets you a fancier headstone when you die).  I was a little surprised, though, that the game does support saves (though you could only fit one on a disk on the old releases), and said save is surprisingly not erased once you load it, so one could theoretically just save-scum their way through a dungeon if they wished; something many later roguelikes would go to great lengths to prevent.

Other staple elements quickly surface too.  Most items the player finds are unidentified, requiring them to use a scroll or wand to ID them, or simply try it out and hope that they don't get a negative effect.  Some items may also be cursed, not allowing the player to unequip them unless they find a Remove Curse scroll.  The player's health will also slowly regenerate over time, which is their only real option for healing other than the odd (and unreliable) item.  Indeed, retreating to a relatively safe position to pass turns and heal back up will quickly become a key element of survival.  Of course, you have to keep yourself fed too or you'll starve to death, so you can't just park in one place for too long.

And of course, Rogue establishes that other key element of the genre it spawned, that being the extreme level of challenge.  The first few levels of the dungeon are fairly easy - you'll mostly encounter weak enemies like bats, emus and the odd Orc, but nothing you can't kill with one or two solid hits.  As you go on, though, they only get more dangerous and start pulling more dirty tricks - Nympths steal items, Phantoms are invisible unless you use a potion or ring to see them, Aquators will rust your armor (lowering its effectiveness), and Medusas will confuse you, leaving you vulnerable to attack for a long period of time.  Appropriately, there are 26 enemies in total - one for each letter that the ASCII alphabet displays - and being able to quickly identify them so you know which battles are worth fighting will quickly become key to survival.

It isn't hard to see why Rogue was (and still is) as influential as it is.  Despite its crude UI, it's a game with a surprising amount of depth to its mechanics, and it's quite an addictive game to play once you're used to its quirks; you can lose again and again and still want to go for one more round to try and get the amulet at the bottom of the dungeon and escape.  A beloved classic among old-school PC gamers for good reason, and while it took a while to catch on on the console front, games like Toejam and Earl and Fatal Labyrinth showed that it had a significant following even back then, drawing heavy inspiration from its design while adding a few of their own twists.  Well worth a look for anyone who's enjoyed any game under the "roguelike" banner, if nothing else other than to see where all the key elements of it got their start. 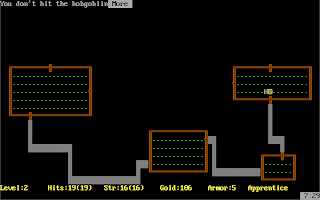 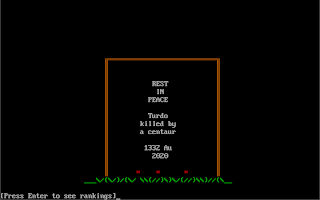