Cadence of Hyrule: Crypt of the NecroDancer featuring the Legend of Zelda

A spinoff title built on the same engine as Brace Yourself's Crypt of the NecroDancer, Cadence of Hyrule is a rare example of the Zelda license being lent out to a third party. But does it provide the same timeless brand of fun that the series is known for, or is this another flop on par with the infamous CDi Zeldas? 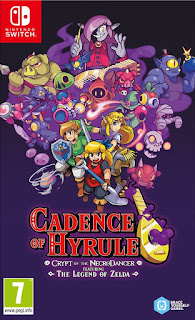 Crypt of the NecroDancer was an oddball fusion of genres, combining roguelike elements with a rhythm game - all combat in the game is timed to music, either the game's default soundtrack or MP3 files provided by the player.  It proved to be quite a popular game as a result, being released across just about every major platform available since 2015.  I don't think too many people - the game's developers included - expected it to get an official tie-in to Zelda, but it eventually happened too, becoming a Switch-exclusive release in 2019 (with a physical release following in 2020 that included all of the DLC released for the digital version).

Cadence of Hyrule bills itself as a roguelike, and it does retain a few elements of that genre while working in many of Zelda's familiar design cues.  The world is heavily reminiscent of Zelda's with its numerous hidden secrets and puzzle rooms, though its overworld and dungeons are procedurally-generated to a point.  The overall aesthetic of NecroDancer is reworked to resemble Link to the Past, utilizing many iconic songs from that games and other Zeldas near that era, and most of the playable cast is comprised of Zelda characters; indeed you can play as Link or Zelda at the start, with more characters becoming gradually unlocked as you play (including Cadence from the original Crypt of the NecroDancer, Impa and the Skull Kid, among others), each having their own slightly different movesets.  One also has the option to enable Mystery Mode (making all items unidentifiable until used) and Permadeath to incorporate more of a roguelike feel, though neither one is required; dying with the latter disabled will simply restart you from any Shiekah Stone you activated, taking your rupees and some of your items away.

NecroDancer's central gimmick remains in place too.  Rather than the traditional turn-based design of most roguelikes, "turns" are now is synced to the beat of the music (with some visual cues in the form of a metronome at the bottom and a movement grid that alternates colors in time with the beat).  Enemies and traps all move in distinct and predictable patterns to the beat, allowing the player to learn their patterns, evade damage and strike when they are vulnerable - an answer to the prevalent element of many roguelikes where the player could be doing well, but still die to an overwhelmingly powerful enemy or a cheap trap they simply couldn't avoid.  The player is expected to move to the beat too; missing beats can cause them to flub an action, while going for long periods without missing a beat and avoiding all damage will give them greater rewards than normal.  A nice touch in this regard is the ability to calibrate the game to account for TV delay (which can vary heavily from model to model), so that the game can still be played regardless of what hardware you have. One can also change to "Fixed Beat Mode", which operates more like a traditional turn-based roguelike - the action pauses completely until you take a turn, so enemies and traps will only move when you do. (This is perfect for those with some accessibility issues as well.)

In addition to the usual Zelda mainstay of utilizing various items to solve puzzles and uncover hidden items, there are a number of random treasures in the form of expendable items and weapons.  Weapons are of course your main asset in combat, though they come in a variety of forms.  You begin with a simple dagger that does a single point of damage and has one space of range, but others will be found, upgraded or unlocked over the course of the game; two prominent examples are the Spear (which has a two-space range) and the Broadsword (which hits three spaces in the direction the player is facing, potentially damaging multiple targets or hitting around corners while staying safe from harm).  Utility items like the shovel (digging through dirt) and torches (burning stumps and lightning up dark areas) surface too, as do limited-use sub-weapons like bombs and boomerangs and scrolls like the Scroll of Fire or the Scroll of Need (which purportedly gives you whatever you may need at that moment), as well as Zelda mainstays like the Hover Boots, Hookshot, Boomerang and empty bottles to store potions, bees and fairies.  Dying will remove most of your expendable items and equipment, but you will be taken to a shop where you can spend diamonds (earned by clearing screens) to purchase some back and make things easier for yourself on the next attempt.

Cadence of Hyrule is also one of the handful of Zelda games to support co-op play, and it's fairly unintrusive as the series standard goes - one can begin a game with two players, or drop in or out at any Shiekah Stone in the world.  The core game remains the same either way, just with two players operating in tandem to clear enemies and puzzles - no extraneous item collecting or dopey "press two switches at once" puzzles.  That alone puts it a leg up above games like Four Swords in my book.

I didn't know what to make of Cadence of Hyrule at first, but I'm glad to say that it was a pleasant surprise.  The classic Zelda format is a surprisingly good fit for a roguelike engine, and whether you want to play it as a traditional one or not - utilizing permadeath, secret item effects and a traditional turn-based structure are all optional - it's quite a fun game.  Being able to predict and avoid enemy attacks and traps cuts down on the "cheap deaths' of many roguelikes, and as a long-time franchise fan, it's quite fun to hear a lot of the remixes of classic Zelda tunes.  An experiment that paid off for both companies involved. 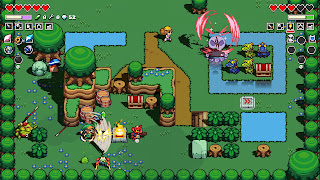 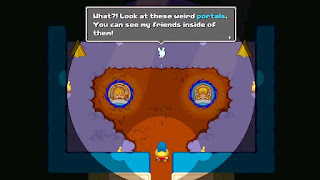