Puzzle Quest: Challenge of the Warlords

Released in 2007 across just about every platform available at the time, Puzzle Quest is a clever hybrid of RPG elements and a match-3 puzzle game set in Steve Fawkner's Warlords universe.  But does this new gameplay turn prove to be a worthwhile endeavor in itself, or does it just become another forgettable casual puzzle game? 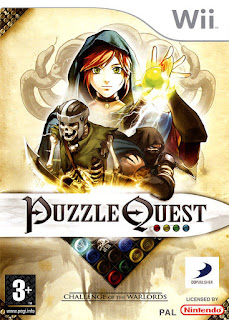 Steve Fawkner is a name familiar to long-time PC gamers, having been responsible for the Warlords turn-based strategy series and its real-time spinoff, Warlords Battlecry, both viewed as defining games in the genre.  Puzzle Quest came as a bit of a surprise after nearly two decades of strategy titles, taking the setting and general premise but reworking the core gameplay into a simplistic match-three puzzle game.  A pretty stark contrast, but it did prove to be a very popular and successful title in its own right; spurred by a mention on the popular webcomic Penny Arcade that resulted in a spike in demand for the Nintendo DS release, Infinite eventually was able to hire over 70 employees to port Puzzle Quest to almost every platform of the time.  For better or worse, this has also resulted in the company mostly just producing sequels and spinoff games on the format since.
The core gameplay itself is very simple - you're given a 8x8 grid of various icons, and matching three in a row will give you resources depending on what type of symbol you'd matched.  Red, yellow, blue and green orbs give you mana of that type, which in turn fuels character-specific spells and abilities.  Purple stars give bonus experience points, gold coins earn money, and matching skulls deals damage to the opponent (with black skulls adding bonus damage and destroying any pieces around them when matched).  Matching four or five pieces at once gives a bonus turn in addition to whatever match you made, allowing you to rack up bonuses very quickly if you can keep a chain of them going.  As pieces are removed from the board, more will drop in from the top, which can potentially trigger numerous matches in a row (and, indeed, the game gives a 100 experience "heroic effort" bonus if you make five or more matches from a single move).  The game will also drop in Wildcard pieces randomly and when a player gets a five-in-a-row clear; these can match with any of the four orbs and aid greatly in setting up chains.
As in most RPGs, you're given an opportunity to pick a character class at the start, which will determine what elements they favor, which combat abilities they are able to utilize throughout the game and in turn how you should shape your stat allocations when leveling up.  In most of the 2007 releases, there are four - Druid, Knight, Warrior and Wizard.  The Druid primarily focuses on controlling the field, changing types of gems into others or entangling their opponent and forcing them to skip turns;  Knights focus on dealing damage, transform gems into purple stars and can clear all purple stars from the field, gaining their effects for himself (and potentially setting off chains); Warriors are a high-risk high-reward class, with a number of skills that put skulls on the board and clear entire colors from the board at once, potentially setting up highly damaging combos (though the opponent can take advantage of this as well if they're not careful); and the Wizard is primarily focused on gathering mana and using spells to control the board and hinder their foe. The Xbox-exclusive expansion "Revenge of the Plague Lord" adds four more - Warlock, Ranger, Rogue and Bard - while the 2019 Switch version adds another five for a total of thirteen.; these new classes are the Blood Mage, Elementalist, Monk, Paladin and Priest.
The RPG elements certainly don't end there, though.  The game world is portrayed somewhat like a board game, with various locations and towns connected by paths.  As the story progresses you'll be given a number of quests to complete for bonus experience, allies to recruit, items and mounts to equip, a forge to create your own magical items, and the ability to learn new skills, both from finishing quests and by completing challenges to "capture" certain types of enemies.  After a certain point one can also build a Siege Workshop, which allows the player to capture towns and gain monthly income from them; however, towns can also rebel and free themselves from their control, requiring the player to capture them again.  Captured cities also grant bonuses to your damage output when facing other enemies, so it's well worth doing for that reason as well.  So there is quite a lot to do in the game; a lot more than one would probably guess considering the simple nature of the combat system.
In short, it's easy to dismiss Puzzle Quest as a simple casual game at a glance, mostly because it copies the format of relatively 'casual' games like Bejeweled and Zookeeper for its core mechanic.  Those who sit down and play it, however, will find that it's anything but shallow, having a surprising amount of strategy in building one's character, customizing them, completing the numerous quests throughout and slowly making their way up to becoming a warlord. That in turn leads to conquering cities, forging new equipment and making themselves into the most badass character they can possibly be.  Those looking for a competitive element have it too, as there is an option for two players to pit their characters against one another in combat and see who really does it best.  A game that's easy to pick up and play, but a real challenge to truly master. 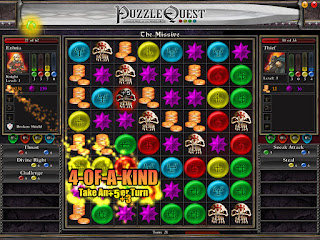 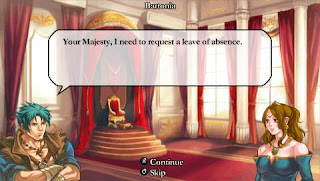