Might and Magic III redefined the series into the format it's best-known for - a more fast-paced, arcadey style of dungeon crawler that loses none of the genre's usual depth.  The fourth and fifth entries - Clouds of Xeen and Darkside of Xeen - continued in that tradition, taking advantage of CD technology and some clever programming that would allow them both to be combined into one massive game - World of Xeen.  But does it prove to be a worthy continuation of the franchise, or does the format just begin to lose its luster with this entry? 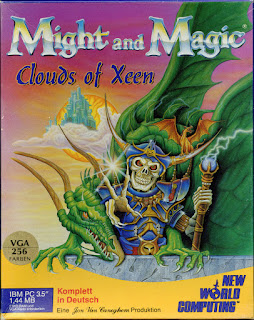 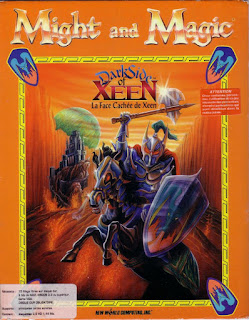 Might and Magic as a franchise, like many CRPGs (and early JRPGs) started off as a fairly standard Dungeons and Dragons-like, but slowly branched out and acquired its own identity through subsequent sequels.  In its case, that meant a generally faster pace and a focus on humor, with exaggerated monster designs and animations and no shortage of silly references.  There was a running story throughout the games, but it was fairly minimal overall, putting more emphasis on its open-ended design and being more of a large, complex puzzle to solve than a plot-driven experience.  It was also one of these earliest games I'm aware of to put heavy emphasis on "power-gaming", letting the player reach absurdly high levels and stats if they wished.  Though it was by no means required to complete the game, it was fun to see if they could overcome challenges that were otherwise designed to be insurmountable; not unlike the uber-boss challenges that would later become famous in games like Final Fantasy VII.
The Xeen games don't change up too much from Might and Magic III, but they don't really need to - the game was a satisfying, fast-paced dungeon crawler experience with a lot to see, and any challenge that couldn't be overcome on the first attempt could usually be done after venturing elsewhere to find some treasure and gold and gain some levels, so it never got too frustrating or "save-scum" reliant.  As mentioned above, the game initially shipped in two parts, each depicting half of the world (The "Light" and "Dark" sides of Xeen), but combining both together allows the player to freely switch between both sides, as well as experience a new line of quests at the end that gives the storyline started in 1 a more satisfying conclusion.  Being originally built as two separate games, though, the Darkside is naturally much more dangerous and intended for a higher-leveled party, so venturing there before you've explored a good portion of the Light side is generally a bad idea (although clever players can jump ahead to certain points and gain large amounts of money or experience much earlier than normal).
A few improvements have been made to the core game, though.  There is now a difficulty select at the start, letting the player pick between "adventurer" and "warrior", with the only difference being that the latter makes the enemies considerably tougher to defeat.  The inventory system has been overhauled too, with different pages in each character's inventory for weapons, armor, accessories and Miscellaneous items (generally spell-casting whistles, coins, etc), which also makes space much less of a concern.  There is  a separate page for quest-related items, making it impossible to accidentally sell or drop them and have to acquire them again (or reload a save).   A quest log is added as well, making it easier to keep track of your current objectives and important coordinates.
A few other changes are apparent right away for fans of the older games.  Towns and dungeons are fewer in number but much larger and more complex, breaking the series' usual 16x16 format at every turn.  The game puts less emphasis on puzzles this time - there are still some, but they're generally a lot easier to decipher and rarely span more than a single dungeon or questline.  Being the first games in the series to utilize CD technology, Xeen also puts focus on cutscenes, high-quality character portraits and voiced dialog, which, per era standards, is very cheesy (though that makes it fun).
The third, fourth and fifth Might and Magic games would be released on a yearly basis, and it would be another five years before the next entry, which would utilize a new engine and, with it, the gameplay and art style would be significantly reworked.  Fittingly, while the Xeen games aren't a huge leap over the third game in terms of technology or presentation, they retain what made it fun while making a few tweaks to what wasn't, becoming the most fun and polished games the franchise had seen to that point.  The gimmick of being able to combine both games into one was a relatively novel concept at the time (and is rarely repeated even in modern games), and while it wasn't the series' most highly-regarded entry, it was popular enough to spawn a fan-made expansion that even got included in later compilations as a bonus.  Another worthy Might and Magic title. 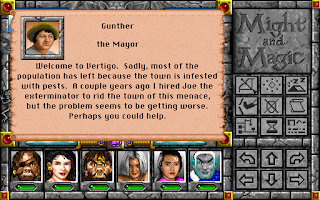 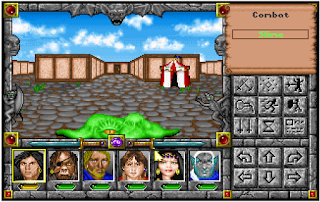