Built as an "RPG for beginners" owing to disappointing sales of the first two Final Fantasy games to be localized for the west, Mystic Quest was also notoriously released in lieu of one of the franchise's well-regarded games, Final Fantasy V.  But does it manage to appeal to more experienced RPG players as well, or is this one you can safely skip if you have any familiarity with the genre? 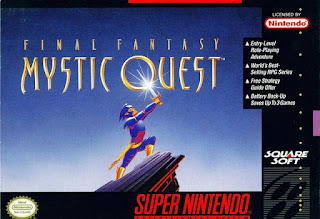 Final Fantasy Mystic Quest was the first proper spinoff of the Final Fantasy franchise (and the first FF to be released in Europe), and it remains a controversial one among fans to this day.  While somewhat favorably received in its time, it was not a big seller for Square, as it didn't accurately represent the design of the series for newcomers, nor hold appeal for those who played the first two Final Fantasies and expected another epic adventure in that style.  But perhaps most crushingly of all, Square passed on localizing Final Fantasy V (a favorite among many) in favor of this one, thinking the reason for low sales were because they were made too hard for American audiences.

The titling of the game is somewhat confusing too.  In Europe it was called "Mystic Quest Legend"; not to be confused with "Mystic Quest", which was the name used for the first Seiken Densetsu game when it was localized for Europe (released in North America as "Final Fantasy Adventure").  Probably not helping either was the fact that the in-game enemy designs and overall style were much closer to the SaGa series than a Final Fantasy title; no surprise, as it shared much of its development team with the third SaGa game.  Because of all this, it isn't hard to see why Square decided against any future title alterations once the PS1 era rolled around.

That's certainly evident from the get-go with Mystic Quest.  Featuring a brighter, cartoonier style than the two earlier-localized FF games, as well as a simpler plot and a more prevalent jokey tone, it's definitely not in keeping with the darker mood or twist-laden storylines of 1 or 4.  In fact, it actually resembles Zelda more in some respects, as the player often has to solve puzzles in dungeons by pushing objects, blowing things up with bombs, crossing pits with an extending claw, or just leaping over gaps (with a dedicated jump button, no less) to proceed.  Heck, one of the first areas you go to is a forest, and to get through, you have to mow down trees in your path with an axe as you would bushes or grass in a 2D Zelda game.

Combat in the game is overly simple too, with most enemies the player encounters dying in only one or two hits, and those that don't are often because you didn't use an attack that particular foe is vulnerable to (which it will inform you of each time you attack them).  Health meters can be displayed as yellow bars that empty to red as you take damage or a numeric display, though I don't imagine too many people found the bars too useful for gauging one's health; I certainly didn't.  Equipment isn't handled as in a traditional RPG, either.  As soon as you get something stronger, your old stuff is immediately discarded, never to be seen again, and it always occurs during a scripted event - you never buy new equipment in shops, save for replenishing expendable items like bombs or potions.  But perhaps most insultingly, you only get two playable characters at a time - your main character and a computer-controlled second character who comes and goes at the whim of the plot, and who is always higher-leveled than you are.

Another element of this was that random encounters are a non-factor in Mystic Quest.  Instead, enemies are clearly visible in dungeons as sprites, and they will only engage you when you walk up and touch them, meaning you can easily just leave a dungeon, heal up and come back if you ever get too beat up to continue.  On the overworld, foes only appear at specified "battleground" tiles that can be freely skipped over (though clearing them out often gives you rewards like extra money or experience), and in both cases, you can almost always run away from battle on your first attempt, so combat feels more like an inconvenience rather than a true obstacle to overcome.  One detail I did like, though, is that there is actually some visual feedback from your enemies during fights - as their HP decreases, they will visibly show damage, which serves as a handy indicator (and something curiously absent from the series proper for many years after).

One big plus to the game is its soundtrack.  Nobuo Uematsu didn't work on this particular game, but it's nonetheless unique and well-composed, with some catchy tunes for towns and dungeons and two hard-rock themes for combat (both enemies and bosses).  The composer this time around was Ryuji Sasai, who would also compose music for Final Fantasy Legend III, Rudra no Hiho and Bushido Blade 2, as well as the first two games in the Xak franchise.  While it's certainly a departure from Final Fantasy's grandiose and orchestral pieces, I imagine it lent Mystic Quest more appeal to the western audience it was aimed at, and is definitely worth a listen.

When it's all said and done, Final Fantasy Mystic Quest is what it is - a simple RPG made for beginners to teach them the basics of the genre and get them better prepared for later challenges.  It certainly does its job for that audience, though its appeal for more serious gamers is severely limited - other than some amusing features and a solid soundtrack, it's a short, very easy game with a just-barely-passable storyline.  On the other hand, it is worth playing through at least once for that same reason - seeing what it has to offer (in particular, some creative dungeons, decent humor and enemy designs and surprisingly good music) without an enormous time and mental commitment is a nice change of pace, especially in a modern world where every game, RPG or otherwise, has to be 60+ hours because big publishers won't touch it if it's any shorter. Later Square games like Final Fantasy VI, Chrono Trigger and especially Final Fantasy VII would do a much better job appealing to a wider audience with accessible design, faster pacing and inventive, yet intuitive mechanics, though I doubt Mystic Quest helped bring many new fans to the genre. 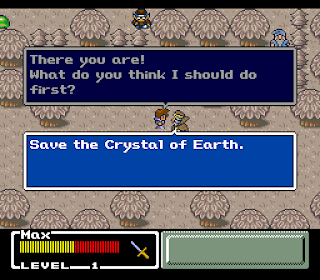 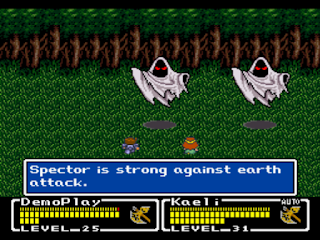 Developer: Squaresoft
Publisher: Squaresoft
Released: 1992, 2010
Platform: SNES, Wii Virtual Console
Recommended Version:  The Virtual Console port is a direct emulation of the SNES version.  But as the Wii Virtual Console is no longer available, the only way to play it at present is on original hardware.  Curiously, there is also a fan-made remake in RPG Maker titled "Final Fantasy Mystic Quest Remastered", though I haven't tried that one out.