Vagrant Story was Yasumi Matsuno's second outing under the Square label and part of what would later be known as the Ivalice Alliance, though telling a story largely unconnected to the one in Final Fantasy Tactics.  Per Matsuno's standards, it is also a very unconventional game in many regards, feeling like a combination of a dungeon crawler and an action-platformer.  But does it prove to be a worthwhile experience, or is Vagrant Story a game with too many ideas for its own good? 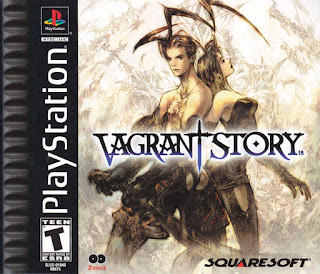 Vagrant Story was definitely a divisive title among Square's PS1 entries, proving to be much different from their usual fare.  While touted as another entry in their acclaimed line of "movie-like" JRPGs (and having the aesthetics and some gameplay elements to match), it was really more of an action-oriented dungeon crawler; there were no shops, a limited supply of items, HP and MP would slowly recharge over time instead of doing so at inns or save points, and it had an emphasis on platforming and puzzles in between story beats and battles.  The game was even broken up into "stages" - generally each time you defeat a boss, you'll get a ranking, some items and a semi-random bonus to your stats (governed by a rolling slot machine).  Limited inventory space was also a turn-off to some, though the game did at least provide linked chests you can put items into and retrieve from any other like chest, similar to the safe rooms in the Resident Evil games.

Vagrant Story also featured a combat system somewhat similar to Parasite Eve, albeit not tied to a turn gauge - pressing the circle button at any time pauses the action, bringing up a 3D globe that you can target enemies within with your weapon.  Unlike Parasite Eve, however, Vagrant story features intra-model targeting - the ability to hit an enemy in their torso, a limb or the head.   Enemies are often vulnerable in only a specific point or two (for example, an early boss is an animated set of armor with a very thin connection between its torso and abdomen - hitting anywhere else will do much less damage).  Similarly, hitting the same spot repeatedly can cause a critical injury, inflicting negative effects like weakened attacks or parrying, silence or reduced movement speed.  Enemies can do the same to you, however, so keeping yourself healed during battle (and out of reach of your foes whenever possible) is a key part of the overall strategy.

Adding to this are battle abilities, which come in both offensive and defensive forms.  Offensive ones allow the player to time button presses during attacks to perform followup attacks, often with added properties - Draining some health from the enemy, restoring a small amount of weapon durability, inflicting status effects, or just doing extra damage.  Several can be chained in a row as long as you continually time button presses to a hit, racking up damage very quickly.  Timing hits is quite precise, though, and will require some practice on the player's part.  Defensive abilities work on a similar principle to the above - time a button press to an enemy's attack hitting you, and you'll get a bonus effect in return.  Countering their attack for partial damage, blocking about half the damage you take from a particular type of attack, or preventing status effects from being inflicted,  to name a few.

Mastering timed button presses and blocks is not as easy a road to victory as you may think, though, as there is a significant Risk VS reward element to the game - literally.  There is a mechanic in the game called Risk; as you attack (and chain attacks), your Risk counter will rise, and as it grows higher, you'll have less chance to land hits and will take more damage from enemies, but also a higher chance of scoring critical hits.  Risk will decay over time until it's finally back down to 0, doing so much faster out of combat, or you can spend items to lower it in a pinch.  However, it does build surprisingly fast, particularly when you chain battle abilities (which add several points per hit or counter move), so weighing it effectively also becomes essential to victory.

Special moves come in other forms, too.  Using a particular weapon type long enough will cause you to learn a Break Art for it - these are often powerful and useful attacks, but drain some of your HP when you use them, so they come at a cost.  Magic naturally plays into the game too; you have an MP bar that slowly refills over time, and will find Grimoires throughout the adventure that cast spells.  Using one causes you to learn that spell, and from that point on it will be cast from your MP reserves instead.  Neither of these abilities can be chained, but neither build or factor in Risk either, so they're another option to factor into your strategies.

I think the major element that drove most people away, though, was Vagrant Story's crafting system.  This too quickly becomes vital to success, requiring the player to tune their weapons and equipment to maximum effect against enemies, and further, to pair them with the proper grips and gems.  Weapons have interchangeable grips that are more or less effective with certain types of weapons, while shields can equip gems that change their affinities toward certain attacks.  Weapon types can also be combined to create new ones, with the product of that union having a combination of the affinities of both (though not necessarily an average).  There is a large random element to this too, so while you can occasionally get something amazing like a Damascus weapon, you might also get something less effective for the situation than you'd necessarily like.  Generally, you'll just have to hope for the best, and be prepared to make do with what you get if you don't luck out and get optimal results (or just be prepared to do a fair bit of save-scumming until you do).

Vagrant Story is definitely an odd beast, particularly for the era in which it came out.  While it retains some similar design elements to earlier PS1 entries on the system and its movie-like presentation definitely lives up to Square's high standards, its gameplay is considerably more akin to older titles from the early CRPG era.  With an emphasis on puzzles, random dice rolls, very tough battles, scoring points and a very in-depth crafting system that could fill a book in itself, it's a game with a steep learning curve and a heavy luck element rarely seen in JRPGs.  It does its best to be accessible and intuitive (even providing an online manual to explain many of its finer points), but even with that, it's something that will require a lot of patience and practice to adapt to.  However, those who enjoy this style of gameplay will quickly find it rewarding once they've attuned to its mechanics, and seeing how high you can raise your rank by completing stages and earning titles as quickly as possible will certainly spur them to master the game even further.  Those seeking a real challenge can also try again on New Game Plus mode, which allows you to carry over your gear but unlocks a new area with much tougher enemies that truly put your skills and luck to the test. 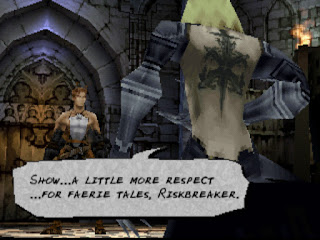 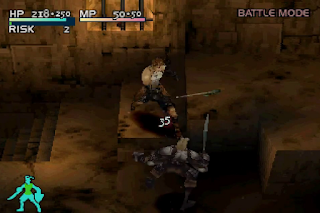