Secret of the Silver Blades

The third in SSI's Dungeons and Dragons series makes some modest improvements to the engine and continues the running storyline once again. But is the third time around still fresh and new enough for discerning fans, or is this a sequel that can safely be skipped? 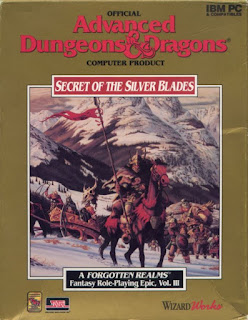 Another entry in the prolific Gold Box series, and while not too much has changed from its predecessors, there are some marked improvements apparent right from the get-go.  The intro itself shows this off in fine form, with some gorgeous, detailed artwork that shows off some genuine talent and makes you forget that there are still only 16 colors being displayed at a time.  It's accompanied with a surprisingly decent musical track by John Halbleib, though sadly there is still no music during the actual gameplay.

The UI has seen some overhaul too.  This was one of the first Gold Box games to implement mouse support, though it's largely academic; while you can click menu options at the bottom or select characters during the navigation screens by clicking their names, it's still more efficient to simply use the hotkeys for this purpose.  Moreover, it is unfortunately not possible to quickly target enemies in combat with the mouse, which largely defeats the purpose of even having the cursor onscreen there.  The keyboard interface has also been somewhat reworked; rather than using the archaic method of pressing PageUp or PageDown to cycle through menus, you now simply use the arrow keys, having to enter and leave a dedicated Move mode to maneuver around dungeons; not a big deal once you're used to it, but it took some adjusting after playing the first two games.

As with the previous game (Curse of the Azure Bonds), one can still import characters from the previous titles, allowing them to carry over their stats and experience points but disappointingly none of their equipment.  There is a slight bug with this, though - equipping an item that boosts a character's stats before transferring them over will cause that stat boost to become permament, which is more than a bit exploitable; passing the Gauntlets of Ogre Power around among your party before transferring will give them all 18/00 Strength and a significant advantage for the rest of their careers.  The series' common problem of giving you far too much money is still present here, with even random encounters granting enormous amounts of gold and gems.  The latter are necessary to a point, being required to activate the Well of Knowledge to get your mission objectives, but you'll still be leaving quite a few magical items and piles of platinum coins behind as you travel.

Still, at least some attempt to mitigate this is introduced; the hub town you revisit frequently throughout the game allows you to spend quite a lot of money to get some powerful magic items (Darts of Hornets' Nest, magic scrolls, wands, et cetera), and any particularly valuable things you find that you don't want to use right away can be put in storage in another building for later retrieval.  While a relatively minor feature, it nevertheless comes in handy for keeping your party's encumbrance down and maximizing their move range in battle.

Silver Blades definitely ups the ante for challenge, too.  Many maps can no longer be "cleared" of enemies, so you'll still be getting random encounters no matter how many you've faced before.  Some maps you encounter (particularly the mines) are staggeringly huge and will basically require you to make your own maps.  The level of challenge picks up right where the previous game left off too, pitting you against high-level Clerics, Magic Users and Dragons right from the start, ensuring that you'll have to make good use of your resources right from the get-go.  There is a fast-travel system in place, though as is common for video games, you must venture through a lot of dangerous territory to unlock the portals going back to the Well.

In closing, Secret of the Silver Blades is another standard sequel, with much the same gameplay as its predecessors but some slight improvements to its UI and presentation, a new set of enemies appropriate for the game's recommended level, and some minute tweaks here and there.  There are a few clever callbacks to earlier games, and though its narrative may not be the most gripping the series has seen, it's nonetheless a logical continuation and a pretty good tale to be told, especially for 1990.  If you enjoyed the first two, you'll probably continue on with this one and not regret a thing.