Eye of the Beholder

Westwood's third attempt at a Dungeons and Dragons game, taking on a more traditional format after attempts at an action-driven design with Hillsfar and Dragonstrike.  But does Eye of the Beholder prove to be a worthwhile dungeon crawling adventure, or is this just another forgettable effort from Westwood? 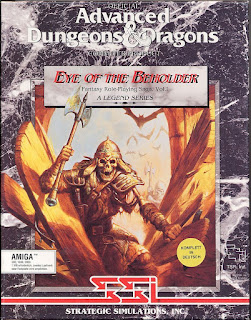 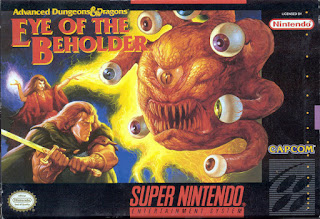 Westwood took a couple of experimental turns with the D&D format, attempting to create something that would, at the very least, make their contribution to the franchise distinct.  Hillsfar was an interesting idea with a lackluster execution, while Dragonstrike opted for a more action-oriented style of gameplay, becoming something more akin to a medieval flight simulator.  It was better received than Hillsfar but not a strong seller for SSI, so it didn't really do much for either company involved in it.

Eye of the Beholder went for a more traditional format in many ways, being a traditional first-person dungeon crawler like many popular RPGs from the 80s, many of which were directly inspired by D&D itself.  Taking cues from the earlier dungeon crawling classic "Dungeon Master", the game uses a similar UI and moves in real time for the most part, though combat is still broken into distinct "turns" with players and enemies' actions locking the other out until the current animation is finished.  It also largely uses a mouse-based interface, so getting good at manipulating spell/equipment menus and clicking icons efficiently is a very essential part to winning battles.

Make no mistake, however; Eye of the Beholder is an old-school dungeon crawler in every other respect.  It's viewed from a first-person perspective and largely based around solving puzzles in between battles - finding keys, searching for hidden walls and scarce equipment to utilize and solving a plethora of puzzles to advance.  Traps come in many forms, from tiles that discreetly rotate your party's facing to pit traps (which damage you and can dump you into further danger) and, of course, enemy ambushes, which can be dangerous even for a very well equipped party.  Saving frequently is highly advised, as is utilizing basically any equipment you find - even a humble sling, dart or dagger can save you from some damage by taking out an enemy from afar, or press a switch you can't walk to by throwing it through a window in a gate.  There is no automap feature, however, so it would be wise to either have the hint guide handy or make your own on graph paper; it's very easy to get lost among the mazes of similar-looking walls.

Of course, the game is still quintessential D&D at its core.  You can create up to four characters at the start, with the usual class/race restrictions applied.  Most non-human classes have far fewer options than humans for classes, but often get bonus stats and resistance to some effects to compensate - Dwarves are more resistant to poison, for example, while elves are resistant to charm and sleep effects.  As usual, having a variety of classes will quickly prove essential - fighters or paladins or rangers for the front line, Clerics to heal and turn undead, Magic users to kill enemies, and Thieves to disarm traps and pick locks (which can skip some puzzles).  Amusingly, the generator also includes a Modify command that lets you tweak your characters' stats however you like with no repercussions.  Allegedly this is included as a way to import your characters from the tabletop game, but let's face it, nobody ever used it for that.   Experience is earned through combat, but the majority of it is gained by completing objectives and solving puzzles.  Each floor also has "Special Quests" that grant some bonus XP and useful items; these are often quite obscure and may require a guide (or a lot of trial and error) to figure out, but are very often worth doing.

This isn't always strictly enforced in-game, though.  Clerics can wield non-blunt weapons with no repercussions, for example, and almost any class can utilize throwing knives, darts and slings to attack from afar (useful as at least two of your characters are always relegated to the back row and out of direct attacking range).  You're also allowed to do things like change equipment mid-fight or pick up used projectiles and use them again, which is pretty uncommon for games of this type.  It's somewhat necessary given that the game gives you very limited resources to work with, but still a strange thing to see, especially in a D&D game.

Despite a few rules tweaks, though, this is a quintessential D&D experience in computer game form - you're put into a dungeon, given an objective, and the rest is a bunch of solving puzzles and overcoming obstacles in your path until you achieve just that.  Those who are accustomed to top-down perspectives or more action-driven design may not find a lot to appeal to them here, but for fans of old-school RPGs with a lot of emphasis on the journey rather than the overarching story, Eye of the Beholder has plenty to enjoy. 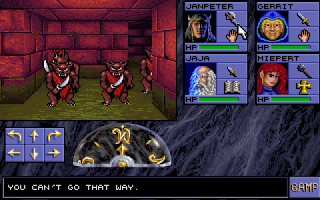 Developer: Westwood Associates
Publisher: Strategic Simulations, Capcom, Sega, Pony Canyon
Platform: MS-DOS, Amiga, PC-98, SNES, Sega CD
Released: 1991, 1992, 1994
Recommended Version: Most editions of the game seem to be relatively similar, though the computer versions are considerably easier to play with a combination of mouse and keyboard inputs.  The Sega CD version is notable for having an exclusive soundtrack by Yuzo Koshiro that, while not really fitting the mood of a medieval adventure, is of high quality and worth checking out in itself.  (This version can also be run in ScummVM with some setup).
The Game Boy Advance game called "Eye of the Beholder" is actually a loose remake based on 3rd Edition rules, with combat taking on a top-down perspective and tactical gameplay slightly similar to the Gold Box games.  It's also not particularly fun, so I'd say skip that one.
Labels: ⭐⭐½, 1991, Full Reviews
Newer Post Older Post Home