The fourth entry in the Final Fantasy franchise and the first to appear on a 16-bit platform, Final Fantasy IV (originally released as II in the west) is definitely the most prolific game in the franchise, being updated and re-released far more than any other game in the series.  But is it one that ultimately stands the test of time well, or is this just laying the groundwork for greater games to come? 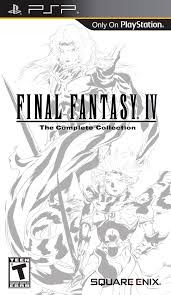 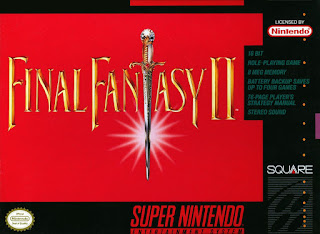 Final Fantasy continued to be a popular series in the Famicom era despite its misstep with the second entry, and it managed to even gain a foothold in the west, too, with Final Fantasy 1 quickly becoming a cult hit.  So, in the early days of the SNES's lifespan, Square decided to release the fourth game in the series, albeit renumbering the game to spare confusion and simplifying its gameplay to appeal more to a western audience, as RPGs were still relatively niche at the time.  In the years that followed it would end up being rereleased on several platforms, each making their own changes and additions but generally providing a more faithful experience to the original game's level of challenge.

Final Fantasy moving to a new platform definitely allowed its developers to branch out and more fully realize a creative vision and storyline in their game, and this is evident right from the start.  The game opens with a lengthy cutscene setting up the plot and establishing the characters and scenario perfectly, and after a brief bit of tutorial at the start, even opens up with a newly-remastered 16-bit version of the classic Final Fantasy theme and an opening text roll slightly reminiscent of the famous Star Wars intros.  That certainly continues throughout, too, playing out with well-realized (if archetypal) characters, movie-like plot scenes and consistently good music to get you swept up in the narrative.  It's not the most amazing example of it on the platform, but for one of the first RPGs on the system, it's certainly nothing to be dismissed either.

Gameplay remains largely familiar, though a few new elements are introduced to keep things fresh.  Uniquely for the series, Final Fantasy IV is the first (and to date, only) game to feature a persistent five-character party.  Unlike Final Fantasy III, the player also cannot freely set characters in the front or back rows - there are always three up-front and two in back or vice-versa.  This generally makes sense as you almost always have a combination of casters and front-row fighters around, but it also means that you'll probably have to reshuffle your party each time a new character leaves or joins up, which can be slightly annoying.

The game itself is definitely more streamlined than its predecessors, with fixed classes for each of your characters, each with their own equipment restrictions and special abilities.  These are largely reminiscent of the earlier Final Fantasies, with Cecil taking on a new class in the form of the Dark Knight at first - wielding powerful darkness-element equipment and able to use an ability that damages all foes in a battle at the cost of some of his own HP.  The rest are largely reminiscent of the classes from 1 and 3, though with a few newer elements mixed in.  Rosa mostly serves as a White Mage, casting healing and supportive spells, but primarily wields bows like an Archer, while Rydia uses both black magic and summons to perform offensive attacks.  Some also get new commands, such as Edge's Mug command (which damages the enemy and steals items simultaneously) or Palom's Bluff (which temporarily bolsters his magic stat).  They tend to vary heavily in usefulness (Fusoya's Regen is basically worthless), but it does add some of variety to the overall gameplay even among characters that would otherwise be very similar.  There are a total of twelve playable characters overall too, so while it may not have the diversity of say, 3, there is still a lot of distinct gameplay to be found.  There is a heavy emphasis on grinding, though, particularly late in the game - underleveled parties will find themselves facing meatshield enemies who can kill them in 2-4 hits while taking numerous attacks per player turn, which can quickly get extremely frustrating.  Moreso as the damage enemies inflicts has a huge random element - one turn they can do around 300, and well over 1000 the very next, with the exact same move.  The encounter rate is frankly absurd too, forcing the player into battles every 1-3 steps at times, exponentially increasing the tedium and frustration.

Final Fantasy IV also marked the franchise's first use of the Active Time Battle (ATB) system, which made the game into a faster-paced experience than the simple turn-based menus of its predecessors.  Essentially, each character on the field has their own time bar that incrementally fills, and once it tops off, they can perform an action, temporarily pausing the passage of 'time' to let the animation play out.  However, other characters' bars will still fill while you're selecting an action, so becoming efficient at maneuvering menus quickly becomes important, especially if you're playing on Active mode.  IV does contain an element largely dropped in later versions, though - several of the more powerful abilities actually require some time to charge before use, which essentially can leave a character helpless for a long period of time (and if they get killed before their attack goes off, which they often will, it goes to waste).  One also cannot "pass" turns in this game - once a bar fills, they have to take an action with that character before they can do anything else.

This does lend itself well to the overall dynamic of the game too, introducing a lot of bosses that utilize unique tactics that the player must counter.  One example of this is the first boss the player faces, the Mist Dragon.  During the fight, the dragon will periodically transform into a mist form; they are invulnerable while in this state and, if attacked, will counter with a damaging attack that hits the entire party, so the player must wait for them to change back in order to resume their attacks.  Other bosses have multiple segments, each performing their own sets of actions, and figuring out which ones to defeat first (or not attack at all) quickly becomes key to success.  This is easily the game's best element, moving things away from bosses just being one-note tank monsters and serving as an example for, well, nearly every JRPG to follow.

In short, Final Fantasy IV is definitely another milestone in the franchise, introducing a lot of iconic elements to its gameplay that would be vastly influential to the genre as a whole.  But the cheesy story, monotonous combat and overall weird pacing make it one that hasn't aged quite as well as Square thinks it has; certainly not enough to get over a dozen ports/remakes and counting.  Still a game you'll want to play if you're looking to get into the franchise, but I don't think it ranks among Final Fantasy's best.

Developer: Square
Publisher: Square/Square Enix
Platform: Super Famicom, SNES, Playstation, Wonderswan Color, Game Boy Advance, i-mode, EZweb, Yahoo!, Playstation Portable, iOS, Android, Windows
Released: 1991, 2001, 2002, 2005, 2009, 2010, 2011, 2012, 2013, 2014
Recommended Version: Final Fantasy IV famously has many different rereleases and updates.  This started with three different versions on the SNES alone; two Japanese releases (the initial release and a toned-down "Easy Type" that makes the game simpler) and the American version which mage things simpler still, doing away with many attack items and most of the extra character skills and reducing the difficulty of most fights.  Later came the GBA port which restored some content and ideas cut from the original release as well as adding some original elements, the DS version that remade the game in 3D graphics, added voiceover and added some new content of its own, and the PSP version, which came packed with its sequel (After Years) and an original interlude story.  The 2021 Pixel Remaster is the one I'd recommend nowadays, though, as it features much crisper pacing and quite nice updated graphics that remain faithful to the original release in style.