A beloved classic among Nintendo fans in particular, Final Fantasy 6 was also notable for being the last game in the franchise to appear on a Nintendo console for an entire generation. But does this cult classic stand the test of time, or is this simply a case of the rose-colored glasses of nostalgia making a mediocre experience seem golden? 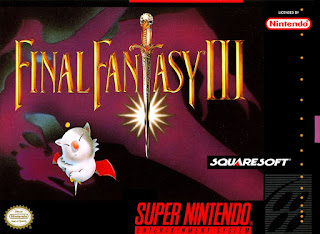 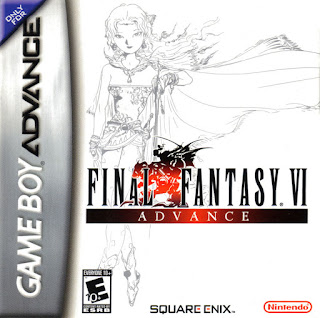 Final Fantasy III (really the 6th in the series - 7th counting Mystic Quest) is certainly a fan favorite in the series, particularly for Nintendo fans as it was the last game Square released on a Nintendo platform for a good while; after this, they hopped ship to the Playstation and achieved new levels of fame with games like Final Fantasy VII, Parasite Eve and Xenogears while the N64 got virtually nothing in the genre to compete with it.  Feelings were hard (and understandably so), but I think that whole fiasco resulted, at least in part, of this being a game that many genre fans clung to.

Personally, though, I think the hype it gets, both twenty-some years back and now, is just a bit overblown, though that isn't for a lack of trying.  The overarching plot is an archetypal RPG story, with an ambitious empire using mighty (and illicit) technology to conquer the world and an unlikely band of protagonists teaming up to combat them.  Quite a few of them, in fact - rather than the simple band of four heroes, or the come-and-go party format of Final Fantasy IV, VI has a cast of fourteen playable characters in total (with a ton of temporary supporting characters), and the player is able to use any of them freely beyond a certain point in the story.  Each fills in one of the archetypal Final Fantasy classes, though with a few new twists added in for good measure, such as Celes - a mage-type character who can use the "Runic" command to absorb enemy spells, blocking them from harming the party and restoring her own MP.  Relm is an odd case, working somewhat like the Beastmaster class from Final Fantasy V, though she doesn't "capture" monsters in the traditional sense; instead, she uses the Sketch command to create a double of them that uses one of their moves before vanishing (which can be fun at times, though it is also notoriously buggy and known to crash the game, glitch one's inventory or even corrupt save files under certain conditions).  Arguably the strangest of all is Gau, who goes into a "Rage", mimicing the attack pattern of a selected enemy until the fight is over or he's killed.  Defeated monsters are added to the pool of enemies that spawn on a specific area of the world map called the Veldt, and Gau must visit there (and spend a few battles away from the party) to learn new Rages.  So there is a lot going on in terms of gameplay.  There are plenty of hidden secrets and obscure tricks and quirks to discover too, so die-hard completionists have a lot to enjoy here too.

Early predecessors of some iconic Final Fantasy mechanics began to show up here too.  Some characters' special moves function as minigames of sorts - Sabin's Blitz command lets the player punch in Street Fighter style sequences of inputs to perform special moves, while Setzer's Slot command lets him spin three reels and get an effect depending on where they land - sometimes good, sometimes not-so-good.  This was also the first instance of powerful, character-specific special moves - not 7 as commonly believed.  Here, though, they're called "Desperation moves" and only have a 1 in 16 chance to activate when a player chooses the Attack command when their HP is critically low, so they're not as useful or reliable as you'd hope.  Still, when you do manage to get one it is a nice little bonus.  Another oddity is the Magicite mechanic, which kind of formed the basis for 7's Materia.  Essentially, these teach magic, provide stat boosts and serve as summons all at the same time; magic is learned from them by gaining AP after battles, and once one hits 100 points for a specific spell, it is permanently learned by that character.  Each esper also grants a bonus to a particular stat when a character levels up with it equipped, allowing the player to tweak them to their liking (like giving more Strength to fighter types or more MP to mages).  Finally, when equipped, one can press Up on the menu to summon that esper for a special attack; not always just elemental damage, but occasionally mimicking other Final Fantasy mechanics too (like having the entire party do a Dragoon-style jump attack).  It's another creative way to tweak your party to your liking, though it seems a bit odd that any character can learn any spell - even characters who clearly aren't built as casters (like Gau).

There is a lot here in terms of storytelling, too.  Almost every character has their own subplot, and each is a self-contained story with a completely distinct tone. The downside is that the overall game feels disjointed and the main story barely has characters interaction or forming anything beyond a superficial relationship with one another (and even when one is hinted at, it's almost never followed up on in any interesting way).  Other games have utilized this format too - 2004's Shadow Hearts Covenant and 2019's Indivisible to name two - though these don't suffer the same degree of mood whiplash as FF6 does as they have a consistently comedic tone and rarely try to go for pathos.  Final Fantasy 6's mood, on the other hand, shifts very abruptly from one scene to the next, and at times, within the same one, often to the detriment of the narrative.  One particularly stark example in my mind is a character tormented by the deaths of his family and said torment manifests as... the famous vaudeville comedy act, the Three Stooges.  No joke; they really did that.  Others come to no satisfying end (Gau) or are just given brief lip service and scarcely mentioned again (Celes), so for many, you're kind of wondering why they're there at all beyond providing an archetypal Final Fantasy class to play as.

That's not to say that writing doesn't shine at times, because it certainly does.  One scene that particularly stood out to me was the origin story for Edgar and Sabin, two brothers divided by destiny.  This scene was written by Soraya Saga (who would later become one of the main writers on Xenogears and Xenosaga) and it definitely shows her talents with some strong dialog and striking imagery, quickly becoming one of the game's best moments.  That, plus some effectively dark writing and unsettling imagery in other characters' stories, and the consistently high-quality music and graphics every step of the way, just made me wish they kept a more consistent tone throughout the game and made it all fit together instead of ultimately creating a bunch of mostly separate storylines with only a tenuous binding thread.  And that they'd do less shoehorning humor in at completely inappropriate moments.

Part of said inconsistency may fall on the shoulders of one Ted Woolsey.  He worked as a translator at Square in the mid-90s, localizing this game as well as a handful of other popular releases (Secret of Mana, Super Mario RPG, Chrono Trigger) and eventually working on the ever-controversial Secret of Evermore.  All of these games to varying degrees had a comedic tone to them, with a lot of pop culture references (enemies named "Ipooh" and "Evil Oscar" respectively) and lines of dialog that are just plain silly.  However, controversy arose when fan translations started to become more prominent and it was found that a significant portion of this humor was his own invention and not a literal, direct translation of the script.  As a result, the game definitely felt much more uneven and jokey than its creators probably intended, and numerous fan-translations were created to give it a more literal take, with Square even replacing the script with a freshly retranslated one in later releases starting with the GBA port.  Having played both, though, I can definitely say that he made Final Fantasy III a more memorable game, as a lot of the redone story is just plain forgettable; characters don't really have much personality of their own and many equivalents of the SNES game's most iconic lines (particularly Kefka's) are just bland in comparison.  For better or worse, Ted did made the game more memorable and distinct.  He's not solely to blame for the weirdly inconsistent tone (his changes not accounting for moments like the ten-ton weight gag or the aforementioned Three Stooges bit), but he certainly added to it and at least contributed a lot of its funnier bits.

In the end, Final Fantasy 6 is one of the strangest in the series, at least for me.  Its gameplay is varied and consistently fun (if overly easy - I only ever had trouble with 3 or 4 bosses throughout), but its tone abruptly shifts gears between slapstick, melodrama and camp on a dime and its character development and interaction overall leaves much to be desired.  Basically, it feels like it's developers were just throwing every idea they had at the wall to see what stuck, and as a result the storyline is a mish-mash of half-cooked elements that never really come together. Still, it never gets too cringe-worthy like some games in the series (cough cough) and several of its jokes and dramatic scenes work surprisingly well, so it does at least pay off on some level. That I still remember much of what goes on in it despite not playing it in over fifteen years probably speaks to it being a memorable experience as well.  But the fact that I've never been one to buy into the 'console warrior' mindset and have endeavored to experience as many RPGs as I can, many of which I've found better-executed in various ways, probably contribute to it being a game I have fun playing but don't have as strong an attachment to as many. 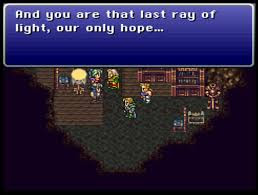 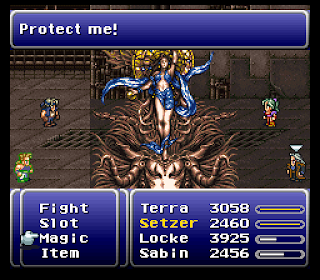 Developer: Square
Publisher: Square
Platform: SNES, Playstation, GBA, Android, iOS, Windows
Released: 1994, 1999, 2007, 2014, 2015
Recommended version:  The original SNES version is still my favorite, retaining the Ted Woolsey translation as well as having the original art and music, both of which suffered in quality in most subsequent ports (particularly the Android/iOS/Windows port, which feature redone graphics that are mismatched and ridiculously ugly).  The Playstation version is a mostly-faithful port of the SNES, but suffers from lengthy and frequent load times.