The first in SSI's famous "Gold Box" series, a short-lived but prolific franchise of RPGs that ran on a common engine and quickly became famous for their very faithful implementation of Dungeons and Dragons rules.  But is Pool of Radiance still an adventure worth undertaking today, or is it simply too dated to provide fun for D&D fans and RPG gamers in general? 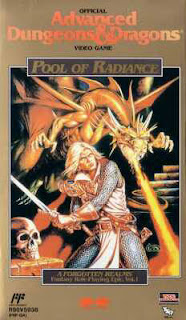 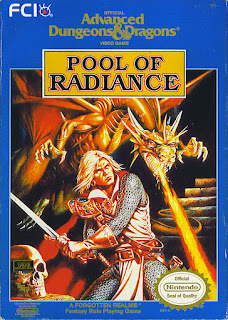 As the company's name implies, Strategic Simulations was known for producing quite a lot of in-depth simulation games spanning any number of topics - wars, presedential elections, pinball games, and a numer of fictional scenarios like a post-apocalyptic battle for territory and, of course, turn-based fantasy adventures.  The last of these are best-known to RPG fans, in particular their "Gold Box" franchise (named as such because of the boxes they came in) and the surprisingly faithful adaptation of Dungeons and Dragons rules it provided.  Despite the franchise's relatively short run (lasting from 1988-1992), it spawned over a dozen games and continues to be highly regarded among fans of both D&D and computer RPGs.

It isn't hard to see why, either.  As Ultimas 4 and 5 were already out and set a staggeringly high bar for design and storytelling, they naturally had a tall order to compete with.  Thankfully they do a surprisingly good job of that, even if many of the plot's elements are relegated to a paper manual owing to disk size restrictions.  The player controls a party of six adventurers as they arrive in the city of New Phlan, which faces all manner of threats and dangers.  Naturally, they are commissioned by the local government to do things like clear slums of monster, find documents from before the fall to find out exactly what they're up against, and even perform a stealth mission or two to discover their enemies' plans.  Through all of this, they slowly unravel the mystery of Phlan and seek out the source of the evil that plagues it.

Not amazing stuff by genre standards, but it certainly gets the job done and keeps the player motivated toward completing the game.  D&D fans also found themselves right at home with its gameplay, as the engine strives to replicate almost every minutiae of the tabletop experience.  Completing quests and finding treasures gives far more experience than simply fighting mundane monsters, which sets it apart from most D&D adaptations (and RPGs in general) and discourages grinding, as there are only so many quests to complete in the game and encounters in most areas are finite.  Additionally, fighting doesn't have to be the solution to every scenario - often one can avoid battle by parleying with enemies, and their tone and spoken words can often cause them to leave peacefully.  When one must fight, combat is honestly very fun, with a top-down view, turn-based combat and surprisingly faithful adaptation of many of D&D's iconic spells, monsters and status effects, for both good and ill.

Some less savory elements appear too.  D&D's high difficulty is evident from the get-go, with any number of things can instantly kill your characters - missing a roll for poison is immediate death, and being disabled by Hold Person, Sleep, et cetera leaves you completely helpless for an immediate killing blow.  Level Drain quickly becomes a problem too once undead enemies show up, with the only way to cure it being a spell scroll (which are in limited supply throughout the game).  Battles are staggeringly huge in scale at times (with over 50 enemies in some), so even well-equipped parties can be overwhelmed without a significant amount of luck on their side.  Other complications not implemented in many later RPGs apply too - money has weight and comes in five different values (Copper, Silver, Electrum, Gold and Platinum), which quickly makes buying jewelry, gems and so forth a necessity to free up inventory space for other items.  The game operates off of 1st Edition rules, which severely limits the level growth of non-human races in everything but the Thief class, and some iconic D&D classes like Paladins  and Rangers are not implemented in this game but would appear in the sequels (requiring the player to create new characters instead of import them from this game if they wished to use those classes).  The UI can also be somewhat unwieldy, particularly at first (utilizing the numpad, several letters and the Pageup/Pagedown keys to cycle menu choices), but it becomes second nature before long.  Finally, the game does still use a first-person, grid-based perspective for much of its navigation, which may be a turn-off to some; particularly those who dislike drawing their own maps out on graph paper.  However, there is a third-party mod called the Gold Box Companion that adds an external HUD and map to the game for easier use among many other features, so this isn't as much of a problem if playing on a modern system through DOSBox.

In short, it isn't hard to see why Pool of Radiance is a beloved classic and the Gold Box engine remains so highly regarded.  There is a staggering amount of content for discerning D&D fans and RPG players alike, and the fact that it's still quite a lot of fun to play today despite its more frustrating elements speaks to its quality.  And of course, its emphasis on telling a story over endless, brain-dead combat and skill micromanagement makes it hold up much better than most games bearing the D&D license.  Definitely worth a look, especially as you can get almost the entire Gold Box series on GOG now for a token sum. 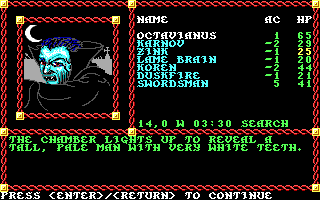 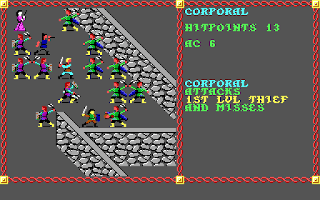