Obsidian Entertainment debuts a new game with gameplay much in the vein of New Vegas and writing and direction spearheaded by the efforts of Leonard Boyarsky and Tim Cain, two of the minds behind the 2D Fallout games.  But does the Outer Worlds provide an experience to rival the quality of their former efforts, or is this just another misfire for the company? 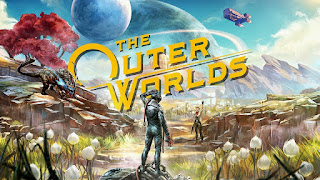 Many longtime Fallout fans, myself included, were very eager to have its original writers return to the franchise with New Vegas.  I certainly was, and it didn't let me down, as I consider it to be one of the best games ever made despite its dated engine and a plethora of bugs.  Bethesda didn't feel the same way, though, as it fell short of their ridiculously lofty Metacritic and score stipulations and Obsidian was booted from working on any further entries in the Fallout franchise (and we all know how well that went for them).  Still, the blend of Bethesda's vast, open world design and Obsidian's talent for storytelling left many wanting more, and The Outer Worlds was seemingly made to fill in that void after eight years.

The engine shift away from Gamebryo to Unreal 4 certainly shows though right away, as the game is far less buggy than the 3D Fallouts and gameplay improvements and streamlines are many.  The somewhat clunky VATS system is replaced by "tactical time dilation" - slowing the game's action temporarily to let you perform actions, with each depleting a bar by varying amounts (moving consumes relatively little, attacking eats a big chunk of it).  It slowly refills itself over time, but some perks (like Reaper) can cause it to refill a big chunk upon killing an enemy, letting the player get on a truly impressive killing streak if they do it well.  This also has the benefit of making melee builds much more viable, allowing the player to even hold their own against hordes of gun-toting mobs with an axe, club, spear, and so forth.

Other common-sense improvements show up too.  Stealth is a good example of this, being less of a simple dice roll and instead having you stay out of sight in tall grass, behind cover, etc to avoid being seen.  One can also utilize a silenced gun or melee weapon to stealthily pick off enemies one at a time, unlike in many RPGs of this type where one enemy's death will cause all of the rest nearby to immediately know your position.  You also share a unified inventory and carry weight with your followers (up to two of which can accompany you at a time), and healing yourself will grant them some benefit too, keeping you all in the fight.

Weapon and armor modding return too, though it's not quite as extensive as earlier games' options.  Firearms generally get the most benefit from this, letting the player expand magazines or add scopes and silencers, while melee weapons can have handles that boost crit damage and attack speed, or mods that change the weapon's damage type (plasma dealing more damage to biological foes while electricity does more to mechanical ones).  Both types of equipment do degrade over time, but all weapons and armor can be broken down into generic "parts" that can be used to repair them, so it's rarely an issue.

The stat and skill system is fairly similar to Fallout's as well, though rather simplified in comparison.  One has the basic RPG attributes of Strength, Perception, Intelligence and so forth, which determine one's starting aptitudes, and they can further pick a "background" to get a leg-up in a skill or stat at the start of the game.  Leveling up and allocating points causes all skills under a particular heading (melee weapons, firearms, stealth skills, and so forth) to all power up, though once one hits 50 points in a single skill under that heading, they must then spend points on it individually to progress further.  Every 20 points in a skill unlocks a benefit, like doing extra melee damage or requiring fewer picks to open a lock, and "Perks" are gained every two levels that grant flat bonuses; disappointingly, though, these don't really tie in to your character build in any interesting way, but are just flat benefits like extra health, a boost to carry weight, and so forth.  Though once nice addition is that your recruited allies get their own sets of Perks and will progressively earn more after they travel and fight with you long enough; this makes you feel more like a cohesive team instead of just "the main character" and others just along for the ride.

A more interesting element of both the role-playing and character customization element is Flaws.  After your character fails skill checks too many times or endures enough injuries (being hit in the head, taking too much plasma damage or being harmed by a particular enemy type often), you have the option of taking a permanent disadvantage in exchange for a Perk point.  For example, you can take 25% more Plasma damage for a bonus Perk, or take a penalty to Perception and Temperament while being attacked by Canids, or, if you fail at sneaking, you'll lose a point of Personality during further attempts.  While you're by no means obligated to take one, it is sometimes worth it to gain that extra perk as well as shape your character more toward your particular playstyle.

The Outer Worlds does fall short in some respects, though.  Most prominent among these is that exploration is disappointingly limited for a space game; while you do get a ship relatively early on, you don't get to freely explore in space or even pilot it directly.  Instead, you just pick a pre-set destination and immediately go there to explore on foot.  Each planet has multiple destinations to land and explore, though these are relatively small - usually only a couple of square miles each, surrounded by tall mountains.  Granted, there is a lot to see and do in almost all of them, with NPCs to talk to, quests to undertake, enemies to fight and stuff to steal, though I'm always a little let down when a game set in the final frontier doesn't let you fully experience said frontier.  Combat does also start to feel a bit repetitive after a while, with a lot of the same small handful of enemies in any given area and little variation in their attack patterns or the strategies required to defeat them.  It does start to feel padded too, especially when you see the same handful of raiders and robotic enemies show up in almost every mission with only the most tenuous explanations given for their presence.

As is standard for Obsidian games (as well as the works of Tim Cain and Leonard Boyarsky), the Outer Worlds' greatest strength is in its writing.  Set in an alternate future that combines the feel of a mid-century space opera with the rampant atomic age feel of Fallout, the atmosphere is utterly fantastic.  Load screens and environments alike highlight the facetiously optimistic atmosphere while the player gets to explore the seedier side of the glam firsthand, experiencing a setting that is superficially impressive but quickly gives way to some very grim themes of human oppression and the devaluing of life in the name of profit.  But as with their previous works, it's all highlighted by a sharp wit and some very well-written characters, backstories and general lore.  Experiencing the grim joviality of this universe, getting to know your allies and their motivations and seeing the consequences of your actions unfold on the screen through the game's many branching story paths is a thrill, letting you really feel like your choices actually make a difference in this world and to these characters.

So while it has some hiccups, I think The Outer Worlds is definitely a success for Obsidian.  Its gameplay is definitely streamlined compared to the games it draws so many elements from, which aids it in some ways and hurts it in others, but its roleplaying element is fantastic; your character's choices really do have consequences, and the story will play out very differently depending on who you make friends with, what factions you ally with or betray and, of course, what skills you use to further your ends.  The sheer imagination of its setting and the depths of depravity (and dark humor thereof) are great, and the quality acting and writing behind all of its protagonists makes it a journey well worth undertaking. 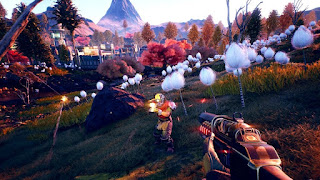 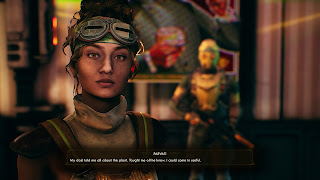 Developer: Obsidian Entertainment
Publisher: Private Division
Released: 2019
Platform: PC, PS4, XBox One, Switch
Recommended Version: All versions released seem to be more or less identical, though I have only personally played the PC version.  The Nintendo Switch version is not yet released as of this writing.
Labels: ⭐⭐½, 2019, Full Reviews
Newer Post Older Post Home